Has anyone tried "cadied" bacon. place the thick cut bacon in a pan and add salt and pepper, then rub on some brown or spicy mustard. then cover the bacon with brown sugar. rub it in, flip and repeat if desired. place in the oven around 350 untill done. keep an eye on it at the end so you only carmelize the sugar not burn it.

My favorite bacon for sandwiches and just eating by its self.

And yes you can do it naked!

And yes you can do it naked!

thats the only way to do it!

hoping for a new way

I saw last month was bacon month at dennys and they had a bacon and maple syrup shake.

i definitely posted this pic on another thread, sorry to be repetitive but im not really sure if anyone paid attention haha. i didnt realize there was a thread dedicated to bacon! i made this for a customer whose husband apparently L O V E S bacon on an obsessive level... i swear to you that's buttercream frosting haha, i didnt think it looked too appetizing but she was over the moon about it.

I made this a few days ago because bags of fresh spinach were on sale at the local grocery.


Microwave your spaghetti squash for 5 min or so until you can split it in half length-wise. Scrap out the seeds.

Rinse spinach, then sauté in covered pan ‘til wilted with ¼ lemon or lime squeezed on. – takes moments only. Drain.

Place spinach in squash cavity, arrange oysters on top. Squeeze ¼ lemon or lime on oysters, dot with Tartar or tzatziki sauce, then place one layer of bacon strips over everything.

Place on BBQ grill over low flame for about ½ hour or until done.

Bump, cause I love bacon, and there are some killer recipes and ideas in here.

You know what is great with bacon?

For me, it's avocado and chilli... and more bacon. 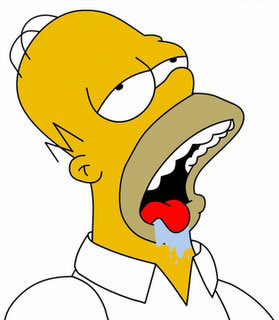 Bump for more bacon! This thread sat idle for most of my hiatus, give us more bacon awesomeness!

EVERTHING is better with bacon.

Nice to be back in the air !

The noble pig, reveled, lauded and lamented, but never unappreciated by the masses....best served thinly sliced or in tube form...

So, a traveling salesman comes up on a farmhouse porch and rings the bell. He hears movement inside and waits.  He looks to his right and sees a large hog with a peg leg and scarring all down one side of its body, there reclined on a chaise longe.  Next to the hog was a Stirling silver tea service with hors d'oeuvres and a large bowl of cream.

The farmer opens the door and the salesman begins his shtick, but soon begins to stammer.  "Sir," he says, "I'm sorry, but I could not help but notice that large hog right there."

The farmer says, "Glad you should bring that up.  As a matter of fact, that is, IMHO, the world's greatest hog, much respected hereabouts."

"Do tell?" said the salesman.

"Well friend, that hog has, on more than one occasion, saved my life. Nothing is too good for her."

"We could never express the love we hold for that creature," the farmer added.

"This is amazing," continued the salesman.  But then, a cloud descended over his countenance and he inquired, "but what has happened to its leg and how did it get that terrible scar on its side?"

The farmer's grin straightened as his eyes lowered slightly, "Well mister, with a hog that special, you just wouldn't want to eat her all at once."

Yeah, totally doing this soon although I've been threatening to for a long time

2. Using a slotted spoon remove the bacon from the pan and set aside. Pour out all but 1 tablespoon of the bacon drippings.

4. Remove from heat and stir in the balsamic.

The USDA advises against the home canning of any kind of cured meat, as they haven't adequately proven that it's safe through government testing.   They do however allow for the commercial canning of cured meats.  I personally don't think that additions of curing agents that are there to eliminate the bacterial growth of pathogens like botulism are going to increase the chances that these pathogens will be present, and/or that they will survive a cycle through the pressure canner.   So I PC my bacon jam for long term, shelf stable storage. This is a wonderful treat to bust out at parties, camping trips, or anywhere else for that matter.

I'm telling you that I think it is safe, but I have no scientific studies that say it is so.  Please make up your own mind, and don't just take my word for it.  If the canning makes you uncomfortable, you can refrigerate it for up to a week with no problems.