and yet more bumping

Yeah Alder, Mr. Bach has written a few very interesting books. "Bridge accross Forever" and that seagull book with the long name I'm not typing out. :) Come to mind. And several on airplanes.

I love them all.   He studied with Jane Roberts and was into the Seth material.   I heard that he recovered okay from his serious plane crash injuries.

I just got Bach's Illusions II: the Adventures of a Reluctant Student.   There was to be no sequel to Illusions, but Richard Bach's near fatal plane crash and subsequent coma brought another book, the next on my list to read. 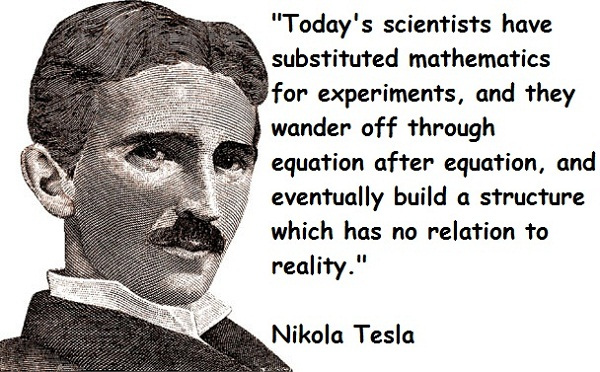 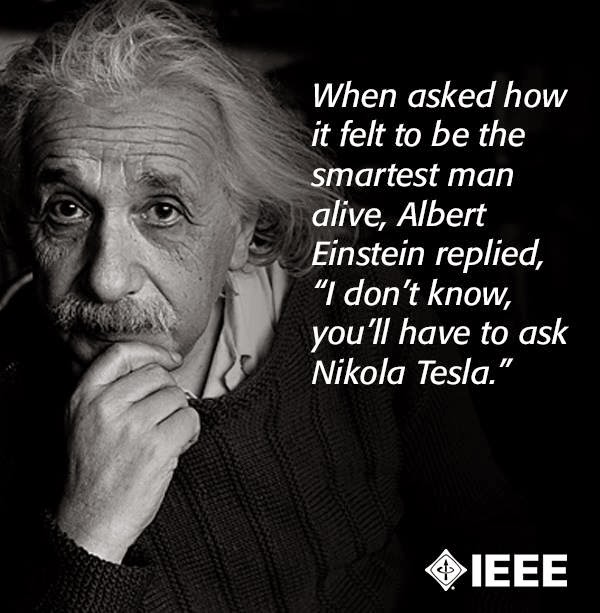 It is not actually known if Einstein actually said that, although he did congratulate Tesla when he got Time Magazine's man of the year award.

Tesla was no fan of Einstein's General Relatively, and wrote quite acerbic commentary about it.

The problem we have is that light speed is now defined as a certain number of wavelengths of the cesium atom's vibration at a certain temperature... Which means that it is a cyclical definition. This has been pointed out by Rupert Sheldrake and others, as it means if the speed of light were to actually change, we won't know.

Prior to this definition, the "constant" c wasn't. It changed ever so slightly as years passed, in both directions!

Now if the speed of light changes, the vibration of cesium atom's light frequency will change by an amount that it will not change mathematically.

This is the kind of stupid shit Tesla was taking about.

Durn, out of likes.  That doesn't happen every day.

I've heard that Einstein said that if any part of his theories did not hold, then none of it would hold.  If there is no constant speed of light in a vacuum, then I would say it would be out the window or down the crapper.   I have just as hard a time with relativity as I have with the big bang, missing or dark matter, dark energy, black holes, and so many other products of the mathturbatory arts.   They all are meant to stand with Newton's fLaw of Universal Gravitation (F = G m1 m2 / r2) in some way.  This, I believe is where the real trouble begins.

The problem we have is that light speed is now defined as a certain number of wavelengths of the cesium atom's vibration at a certain temperature... Which means that it is a cyclical definition...

Prior to this definition, the "constant" c wasn't. It changed ever so slightly as years passed, in both directions!

Now if the speed of light changes, the vibration of cesium atom's light frequency will change by an amount that it will not change mathematically.

This is the kind of stupid shit Tesla was taking about.

This is NOT a priori "stupid shit" as suggested, but is rather an admonition to use this value only as a relationship rather than as an unrelated fixed value.  In this context. the actual relationship between terms is more illuminating than a simple fixed value would be.  The problem arises when the term is erroneously used beyond the limitations of it's actual definition, which I admit, happens all too frequently.

The fact that the mathematical relationship does NOT change, is an asset rather than a liability and reveals a deeper relationship that might otherwise be obscured.

Always remember that equations are just models or stories that reflect reality, they are not actual reality.

Sadly, I am not a mathematician, but in this equation: F = G m1 m2 / r2, where the empirical research involved was where m1 & m2 were interchangeably either a falling chunk of matter, or the Planet Earth, did this model set up an assumption that the reality reflected is that what is dynamically true of Planet Earth is dynamically true of any odd chunk of matter which has been attracted by its field, and that what is massively true of any given chunk of matter is massively true of this Planet Earth, as to its structure?   And did not this assumption get carried on out to the limits of all cosmology and cosmogony, and did the extension of this reach through the macrocosm not also weigh into our ideas of the nature of microcosmic realities as well?

My question is, if the dynamic of gravity is not merely some property of mass, as in practice, the force of these falling pieces of matter have been used to weigh, as it were, the Planet Earth, under the above assumption.  And, the attractive force's actual dynamics have been assumed to exist within the falling matter, to the measure of their masses, as they are attracted to Earth; is not a total rethinking of everything the above equation has touched in order?

We don't know the mass of any planet or gravitating body.  All such values have been calculated, based on the aforementioned observed falling masses, many of which in Newton's research were cannonballs.   We can't really measure the attraction of any cannonball within an extraneous gravity field (such as Earth's) and trust such a measurement, just as we could not measure the resident magnetism of any piece of iron by its attraction to a nearby known secondary magnetic field, within that field.

I get your point Spooner, but the problem is that while the cesium atom's measurement of c allows us to have a fixed quantity of c, that is also it's problem. Now we can no longer see "c" for what it actually is, because it is obscured behind our model.

It's mathematical hand waving, which is fine when you want to calibrate a geosynchronous time keeping satilite, but not so good when you are attempting to understand physical reality...

For those who aren't afraid to look and see that we humans might actually make a difference in this physical world.   If you are in the "not our fault" corner, and take the notion that we are too small to really do anything as impactful as destroying the biosphere's ability to sustain us, then this is not for you.  If it's all because the sun did this or that, never mind.   I think the sad thing about our making the way for our own extinction is, those who have warned us, going back even before Chief Seattle said, "all things are related, what man does to the Earth, he does to himself," we will also take them down with us.

One termite can drill a tiny hole in a board... No big deal.

A termite colony can "bring the house down".

Now for a little Ballance:

Only about 800 extinctions have been documented in the past 400 years, according to data held by the International Union for the Conservation of Nature (IUCN). Out of some 1.9 million recorded current or recent species on the planet, that represents less than a tenth of one percent.

I thought that "150 species go extinct every day" to be bit unbelievable even though the extinction of any species, is in my mind, horrific.

The fact is we are shitting in our own house. We may soon drown in our own shit. That is also horrific.

We can learn to reverse the process. I believe we have to. The history of our species differentiation from all others is a much different use of our minds, however you want to define that.

We use our minds to enhance and accelerate our own evolution. What we usually don't see from our vantage point, is that maximum evolution occurs when a species faces its own extinction, and develops a way to overcome it.

"Our" technology isn't really "ours", it is Nature's, we are it's creation, and we are a link to the next thing. That technology has created this very mess yet who would volunteer to go back to living as apes in the rain forest? Few.

All species effect their environment. All species face challenges. We got a big one coming up. Soon.

Of course McPherson would have to see my weird science as max wacko.  My whole drive to upend Newton and also the laws of thermodynamics is free clean energy.   The problem there is, those who, if they have it, will weaponize it.   I think this is already the case.

The closet practical current energy technology that produce enough energy for our global population and provide enough energy to reverse the global climate appears to be nuclear fusion. There are several schools of development on this, laser collapse models, tokomak torus plasma models, fusor (Filo Farnsworth), and a promising pneumatic model! https://en.m.wikiped.../General_Fusion

Without the energy technology to reverse the trend, our options become much more limited.

The closet practical current energy technology that produce enough energy for our global population and provide enough energy to reverse the global climate appears to be nuclear fusion. There are several schools of development on this, laser collapse models, tokomak torus plasma models, fusor (Filo Farnsworth), and a promising pneumatic model! https://en.m.wikiped.../General_Fusion

Without the energy technology to reverse the trend, our options become much more limited.

If we don't create viable fusion energy, we're doomed, or at least will need to scale our population and industry waaaaay back to get to any sort of a balance. At the very least, we need to stop burning dead plants, but unless we learn to live with less, renewables won't quite get us all the way there. Modern batteries require a huge impact of their own to produce, and are cheap only as long as there isn't too much demand for the elements they're made of.

Here is an article that shows the top 10 producers of Lithium, however USA is #10 and withholds its numbers, but we really don't have much of the metal here.

Interestingly not on the list is Afghanistan - which is purported to contain some of the richest reserves of Lithium.  Nothing to see there I'm sure!

My deal to the nuclear industry would be, clean up all the mess you have made so far before you get to start playing any new hand.