Tomorrow I am going to prep a new tub and just quickly cut off the end with the green off. I have moved this tub which is an in modified shoebox tote to a corner in a storage room. Runs about 68F. My FC for tropical and subtropicals is in the freezing garage actually. Go figure!

With woodlovers it’s better to use a multi culture and not isolate spores from what I’ve heard. So I probably would take the transfers too far. But those look beautiful. I only say that because I have never been able to get an isolated from any woodlovers to fruit. All I’d do is put all those cultures together in a jar or an LC

Yeah, these T2's are the last transfers plates I'm doing since they look so great.

I'll put one into LC, one in a rye jar to get colonized so I can put that on wet cardboard with some alder sawdust, and I will try one plate with just hydrated alder sawdust on it once it's grown out to see how it does straight to wood on the tray surface.

Just put Cyanescens and Hispanica to agar. Really excited about the cyans.

Hispanica will be a work in progress as there really isn't much info available.

I put that top right culture to a small rye pint today, and now have an LC started also.

I wound up shredding the egg carton and mixing up the gym Purp tub. I just don’t feel like that is the culture that will get me there. I went super heavy on new plates today. I also swabbed a bunch of plates of Allenii which I am excited for, and finally, I tried my Sub print again. I went crazy heavy with the spores on straight MEA. They did not terminate at all on cornsyrup with coffee, so back to basics. I also scattered colonized chips for a tub I dumped under a board in the dirt, covered with leaves. I have several old stumps I’ve tried to inoculate as well just to see if anything happens.

This is my longest running experiment by far... almost 5 years ago I was posting about how I had tried replacing Hemp seed oil for water in making GLC. Originally I did it with cubensis, stripping mycelium the same way you would with water (shaken in a colonized grain jar). The pieces of mycelium were then suspended in the Hemp seed oil in a small jar and placed in the freezer for a few months.

Hemp seed oil cannot freeze so I had thought it might be possible to store cultures in it over long periods of time. After a few months I removed the HSO-LC from the freezer and used it to inoculate some mini-jars of sterilized popcorn. At first it seemed completely stalled out for what seemed like a week. I thought it was a fail and left it to clean up later. Next week I looked and the jars were colonized with brilliant white. The Hemp seed oil didn't hurt after all but I think I added too much and it kind of smothered temporarily. None the less it colonized really well once it got going.

With the success of this experiment I knew I was on to something so I wanted to try a longer period. One thing lead to another and almost  5 years went by although I had not intended to go that long in the beginning. Every year I'd check in and noticed that they always looked the same.

In the original Hemp seed oil GLC experiment I used cubensis mycelium that was growing on popcorn.  For the second, longer one I used small.young P.cyanecens specimens suspended in Hemp seed oil in an opaque small jar. Wrapped that in a paper towel and put it in a baggy, sucked the air out and put in another baggy and placed in the back/bottom of freezer.

Here's one of the original posts describing the procedure from right here in this thread:
https://mycotopia.ne...90#entry1292422

Another thing is I had done "experiments" trying to freeze cyan fruits , so I could preserve the freshness and give them to friends later out of season. Placed a handful of cyans on paper towel, placed in baggy and into freezer. Days later I look and they have melted to "mush" and the most brilliant indigo blue/black dye was left in its place on the paper towel. Cool in one way but not in the preserving of any life in the cyans.

Around that time I was using a lot of Hemp seed oil and it was stored in the freezer. It always poured perfectly straight out of the deep-freezer. This stuck with me somehow and  I decided to combine it with my ideas for preserving cultures. You can go a few different ways with the idea...

After a long and interesting 5 years (no moves) the cryogenic Hemp jar was removed from the freezer. Jars of potato agar were made up in advance. I simply removed each stalk piece and rolled it on a clean paper towel to get some of the oil off and then placed in the middle of an agar jar. Placed them in a dark box and kept them at a 70 F location.

After a few days , obvious white fluffy growth commenced and eventually spread to the agar and started fanning across. I was vigilant for bacterial molds , cob-web etc but nothing of the sort came, just pure white mycelium-looking growth. I have not opened the jars for fear of contams.

It's hard to film through glass agar-jars... It makes the mycelium look a  little more fuzzy then it is in actuality. You get the idea that there is life in there though! The plan is to let them colonize a bit more and then add strips of egg carton or possibly soaked alder sawdust. I'm really curious how the mycelium that is in there will react to paper products or sawdust.

When I do open the jars to insert the add-on spawning materials . i'll give it a smell and take a decent from-above photo to share.

Will keep you posted as things progress...

You're an inspiration hyphaenation -- I've read through every page of this mega-thread over the past month as I've been preparing my Ps. Cyan cultivation and you are a very good contributor to the community-- I thank you for your kind efforts and I'm very excited to see the results. If hemp oil is non-reactive with fresh fruits/cultures over time-- and also keeps them from death in freezing conditions, it would be a hemp-tastic way to long-term preserve--or transport-- really precious cargo.

Thanks and shout out to Arathu for having us over! 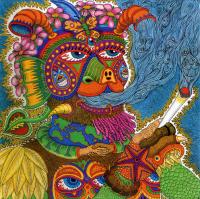 Fungi are incredible and storage in hemp seed oil seems to work quite well.....amazing....sleeping for a bit....

Definitely major thanks to WaylitJim.......it's been a long strange road...

Here was an update 5 months into the experiment ...also from this thread:

Even after 5 months in Hemp oil you can see that the specimens look like they just got harvested...

I remember you doing that work too....after months of soaking immersion in the oil they remained pretty much fresh......sweet!

It's incredible and very interesting to see them "fuzz" up on the agar 5 years later..... but I'm not, really, too surprised that they did.......

Fungi are beyond resilient they are persistent survivors in the correct environments for them IME....

Hyph if you have access to Japanese Knotweed I bet wedges transferred to sterilized quart jars of chips will have a good chance of taking off..... (surely bags would work too)

Drier grains in the bottom of the jar and mixed with the chips, here rye berries, boost the vigor tremendously.......

Not to mention present a well rounded diet right from the start......

oh yeah! some knotweed grows wild in a patch by our dump, perennially. Being 12 feet tall it doesn't matter that it's winter for collecting stalks. Thanks for the reminder brother! That's knot a bad idea!

Hahahahaha........the woodlover wormhole thread now has DAD jokes in it.....

I love this place! Get some stalks folks and give this substrate a shot......the dead of winter IS the time to gather too....

Need some advice. Received a cyans print that was on a laminated piece of cardboard. I can maybe see a faint purple print. Scraping said print produced no germ. (really not sure I even have a print, just some paper labeled pcyan)

Should I put this "print" to moistened cardboard?

Faint purple print means something should should wash into water...I like to place face-out in a small baggy and  rub the print out through the plastic and then take that to agar. Only one drop necessary per agar jar to test. I wouldn't even try grain or cardboard , just agar...

Faint purple print means something should should wash into water...I like to place face-out in a small baggy and rub the print out through the plastic and then take that to agar. Only one drop necessary per agar jar to test. I wouldn't even try grain or cardboard , just agar...


I never go directly to grain. Should I use a syringe to do a drop of water and then transfer said drop? Trying to visualize the bag method.