Awhile back I made up a dozen tiny agar jars. The recipe I used was Potato / Barley Malt and I scaled it down considerably because I only needed a tiny skiff in the bottom of each jar. The recipe calls for simmering chunks of potato for about 30 minutes and then straining (eat the taters) and use a portion of the strained water to mix with the Agar and the Barley malt.

Poured that mix when it was hot very carefully into each recipient jar , so as to not have it blurb up the side or put to much in. I was aiming for an eigth of an inch or less (tried for less) ...

The small jars cooled quickly and the mix solidified. Meanwhile I had made lids that had a small hole and then 2 layers of coffee-filter paper that i cut to size in circles. The coffee-filter allows some air-exchange but keeps out many of the bad things. Next I made spore syringes with a print of Redboy that I knew was clean (I am sloppy to say the least). Shot water into the baggie from 2 syringes , massged the spores off the print and sucked back two syringes of spore-water. Wiped the needle with alchol and capped them. After a wait & shake I tried to drip only one drop in each agar-jar , but it was hard to do , and some had way more than enough. In retrospect i should have streaked the agar by sraping it as I squirted a bit.

About this time winter struck round these parts and temps dropped , so the jars didn't do anything for a week to ten days and I started to forget about them. I was pleasantly surprised when i looked at them a couple weeks later and they all had a good amount of mycelium , some better than others , but all alive. I decided that I wanted to either inject the colonized agar jars with water , swish , and suck back mycelium syringes or add sterilized grain to them.

I opted for adding PC'd Popcorn to each jar ... The reason is I have lots of Popcorn around and by adding it to the agar-jars , it almost guarentees quick colonization. when each jar is colonized I will G2G it into larger jars. When you G2G the Popcorn out , the agar-jar is left to recover , which takes a surprisingly short time. Then its ready to go again ! This time you could make mycelium syringes , or add new Popcorn and repeat the above ... or you could combine the two ideas and add more Popcorn , let it colonize , inject water , shake , suck back syringes and then go ahead and G2G that Popcorn as you were going to and let the agar-jar recover for more fun later.

You could do this very nicely and easily to get a good isolate / clone culture going. Get a stalk chuck going on agar and then make mycelium syringes and/or add grain and G2G to expand.

Here's some pictures of the progress so far.

Small jars of Popcorn and even smaller jars for the agar.

That's what the jars looked like are a few weeks of neglect , although the temps were quite cool.

My super-uber-ghetto glove-bag. I use a clear thrash bag to do my transfers and other semi-sterile work. Its very handy and kinda enjoy working in it. I load up all the jars and remove their ring band , loosen the lid if its tight. Then with washed clean hands I do the transfers. Everytime I'm not doing a transfer I make sure the lids are back on the jars. When I'm done I remove everything and put the bag away ...

If I can keep my temps in the 70's these jars will take off immediately and will fully colonize in no time. Then it's the simple matter of doing up a dozen pint or quart jars 2/3 filled with Popcorn , sterelize , cool and G2G a healthy amount of colonized Popcorn ... and then repeat.

And a couple teks for making mycelium syringes:

Awesome tek for making syringes. I can't wait to give it a try. I have always just cut below mycelium grown out on agar and then used a blender...

The jars weren't in the warmest of spots , but the did all colonize nicely. Most I will use to do a straight-up G2G to more popcorn in bigger jars and a couple I will inject water and suck back mycelium syringes.

What I'll do tonight is gently bang the mini-agar-jars on my palm and lightly break up the colonized popcorn , then inside a glovebox transfer each jars-worth into a recipient jar of sterilized popcorn that has cooled off and is 2/3's filled.

After each transfer I'll place the lids on both the recipient jar and the agar jars. The agar jars will re-cooperate/recover in a couple days and I can repeat the steps adding popcorn.

Loaded the jars in the glove-bag and made the transfers. The colonized popcorn easily broke apart and slid nicely into the awaiting jars. I try to be very smooth and quick as I remove the lid on both jars , transfer and then replace both lids immediately , then I move on to the next jars.

The agar-jar is ready for recovery and looking good. Now all I need to do is roll the pint jars around to mix in the freshly transferred popcorn.

It shouldn't take very long for the pint jars to take off. In the meantime I have a few agar-jars that I'm going to inject water into to make mycelium syringes. When the agar recovers I will place some more sterlized popcorn in each one to repeat the above.

And It stained skyBlue

Your GloveBox ghetto Bag is badass simple man! Nice. You should spread that EXTREMLY SIMPLE AND EFFECTIVE method of making a clean air spot for working.

cool stuff...glad i'm not the only person that uses coffee filters :) also love the glove bag, that idea never crossed my mind, for whatever reason.

Couple days later and the agar-jars are recovering nicely. I'm going to prepare a small amount of popcorn so that i can re-fill the jars again. In proper temps this recovery is amazingly fast.

Popcorn G2G is starting to take off. Trying to keep it as warm as i can , but being winter its not always easy. 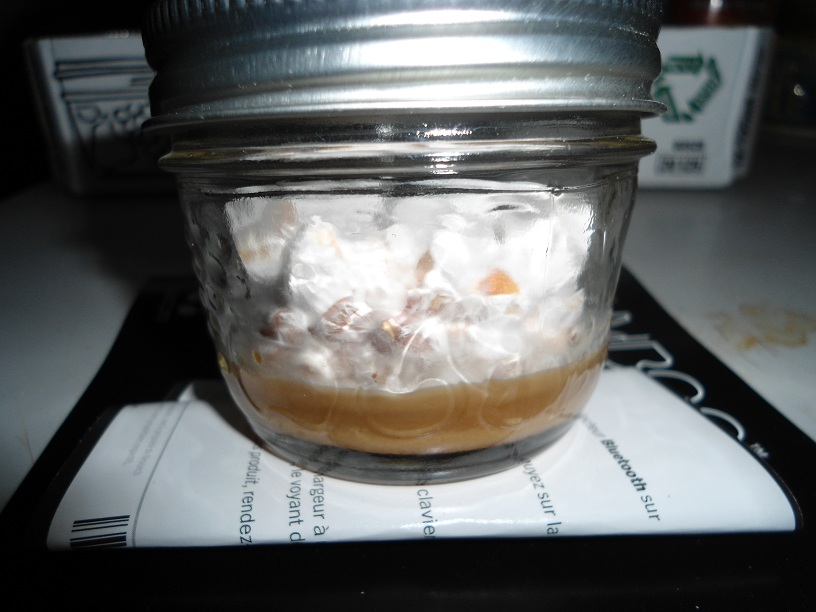 I took one of the colonized agar/popcorn jars and decided to make some mycelium syringes that I will use later tonight. Mycelium syringes are like instant LC's. I gave two links above that outline how to make them. What I did was take four syringes with clean water in them and I PC'd them for 1/2 hour at 5 PSI and let them cool. 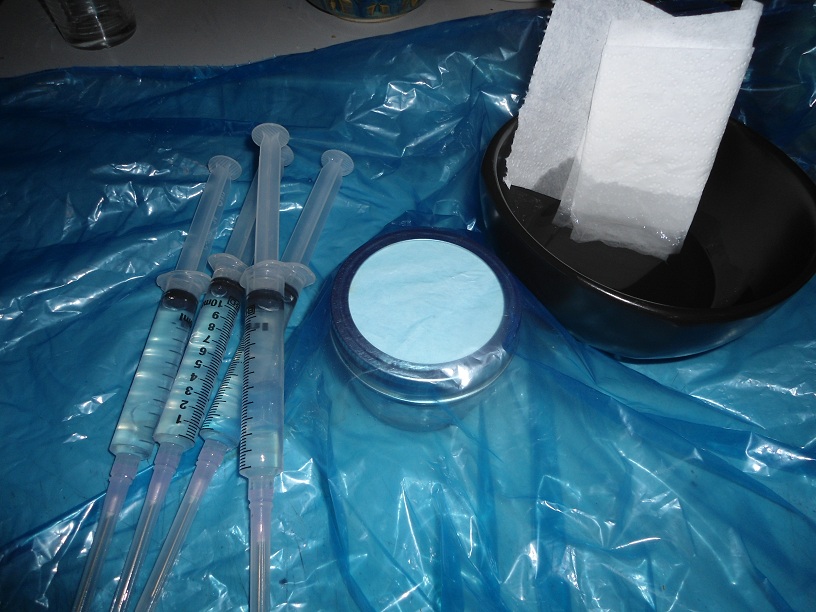 Put my agar/popcorn jar in the glove-bag , wiped the needle with alcohol and injected the water through the bag , through the coffee filter and inside the small hole in the top of the lid. Wiped the needle on the way out and capped it and went on to do the same with the others. 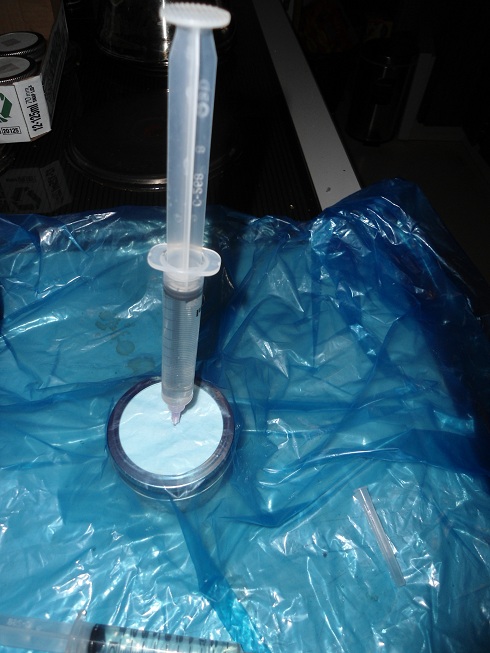 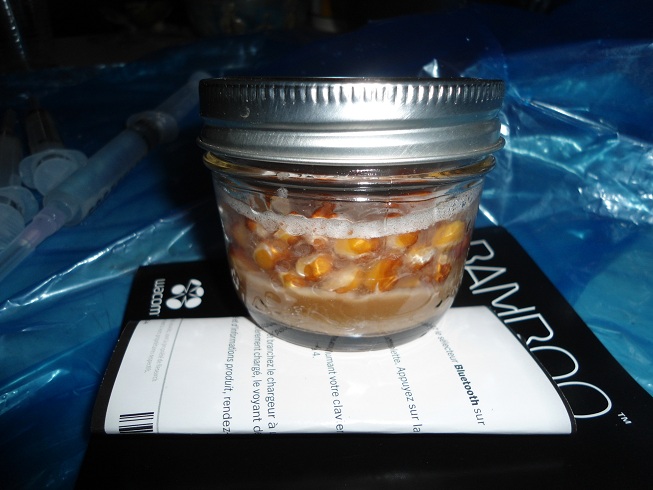 Pic above is after shaking the jar for a minute or two , inside the bag , with my thumb firmly over the hole in the lid ... Most of the mycelium you see in the first pic of the jar in this post was washed off the kernels and into the water. Then I did the reverse of the above , cleaned each tip of the needle with alcohol , sucked back a full syringe of mycelium water , alcohol wiped and capped. The last syringe I held the jar on its side and and angled the needle to the same side. 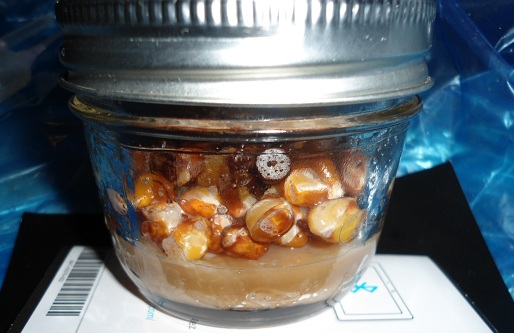 Now the popcorn and the agar are ready to go into recovery mode. In ideal conditions its super fast.

Here's what the mycelium syringes looked like (hard to film !) , they are loaded with healthy myc. 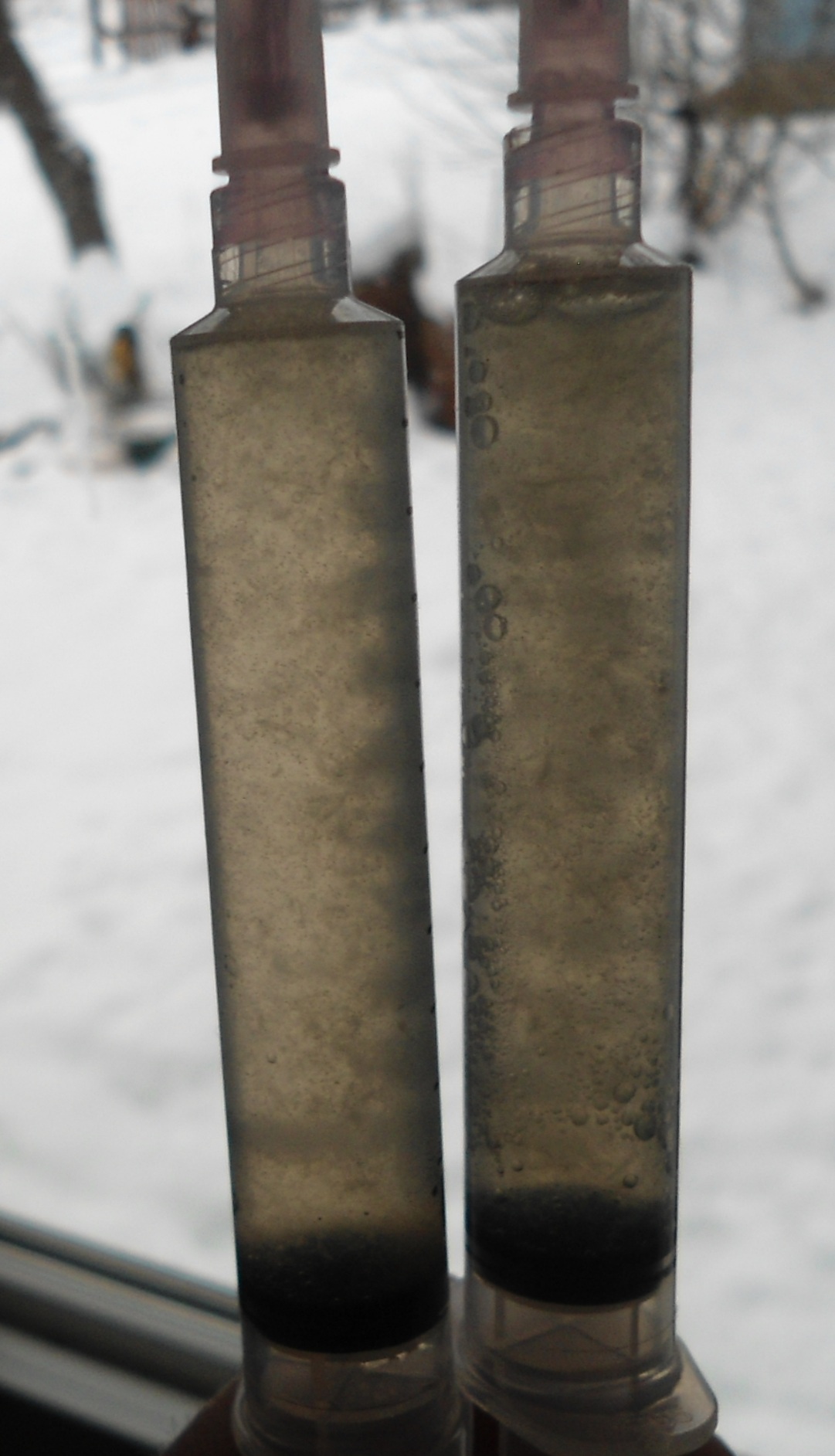 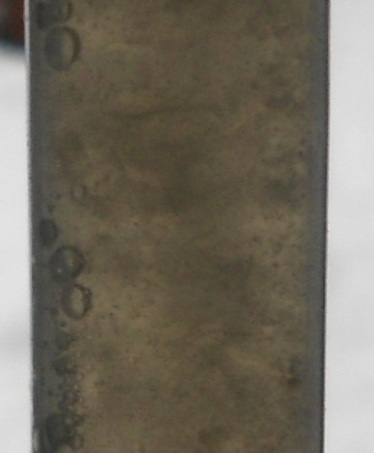 I'm soaking a batch of popcorn that I will sterilize and innoculate with the mycelium syringes tonight. If it goes well , I'll use my other agar-jars to do the same. The popcorn that recovers in the jar after I'll do more G2G.

Mycelium syringes only last a short while before starting to deteriorate. It's best to make them on demand when you need them , rather than leave them laying about. Putting them in the fridge or a cold place helps , but is only a temporary situation. They are maximum best when used fresh.

How long would you say they last hyphe??

A few days at room temperature
Two to Three weeks in the fridge
I try and use them within 24 hours. Its always easy to make more when you reload the agar-jars.

Damn! Ive had a couple in the fridge for about 4 weeks. I was sure i read a post by RR where he said he used a GLC syringe that was 8 years old and it was fine

I was just talking generally about how long they stay optimal ... you can get life out of them long after in the fridge I'm sure.The colder the part of the fridge the better to slow things right down.

Didn't mean to give the impression it was dead after those times , just a little less viable.

Ohhhh great news!! Thanks hyphe! My plan is to start a LME LC with the last bit of every GLC to store it long term. I also use those 1/4 pint jars for agar and to get ny GLC!! Thanks for sharing all the info! Staying tuned! Great grow vibes coming at ya

Here the PDYA recipe I use:

I did a similar recipe , but used way , way less ingredients because I only needed a dozen tiny jars with a skiff of agar. It gets tricky because you have to half everything , then again and so on. Best to not get stoned before doing the math on scale-down from 1 litre recipe.

The PC is cooling with the larger jars of popcorn. I did them for 75 minutes at 15 psi. When they are cool in about half an hour I will G2G the rest of the left over agar-jars with colonized popcorn (about 3 of them) into one quart jart that is just over half full of sterlized popcorn. This will hopefully make for speedy colonization. The other two quart jars are 2/3's full and I will inject one mycelium syringe into each. I made sure to drain the popcorn very well , so that if there is a tiny bit extra water from the 10 cc's of mycelium-water it won't be a big deal. If the jars were already overwet it could be a problem.

Lastly I'll use a small bit of popcorn to refill the agar-jars that are now recovered.

I'll post some pics of the process wherever possible.

Took everything into the glove-bag , removed lid bands and made the G2G transfer into one jar. It's now about 60/40 uncolonized/colonized. Then I topped up the agar-jars that had recovered from before with new popcorn and even topped up the agar-jars I had just transferred out of because the mycelium layer was still healthy on the agar.

After that I shot 5 cc of mycelium-water into one jar of popcorn and it didn't cause flooding , so I shot 10 cc into the other jar of popcorn to see how they compare. I purposely left lots of room in the jars for rolling around the grain to disperse the mycelium everywhere. 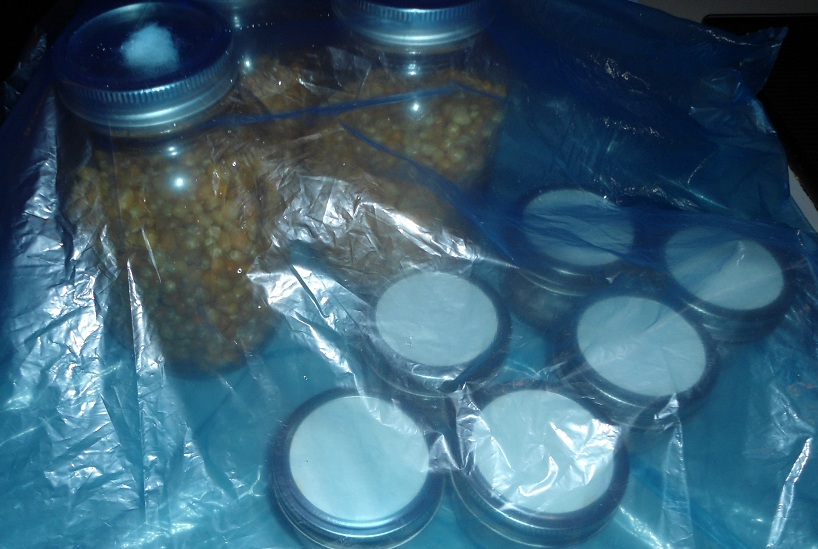 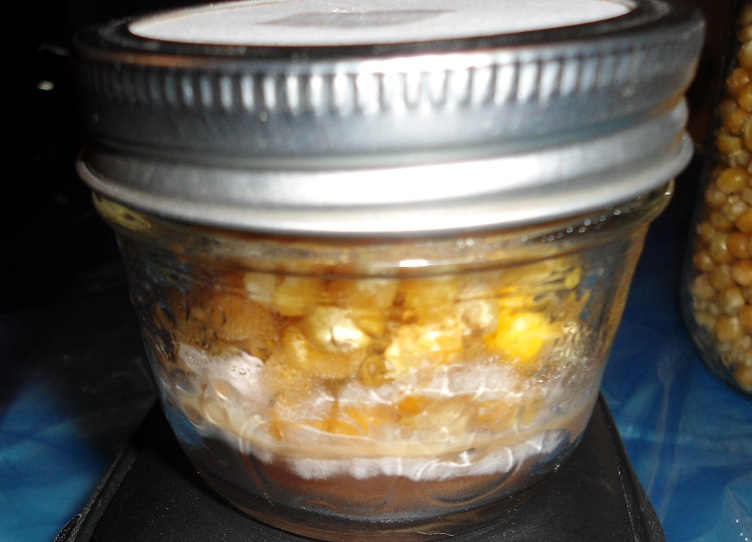 The jars fresh out of the glove-bag. 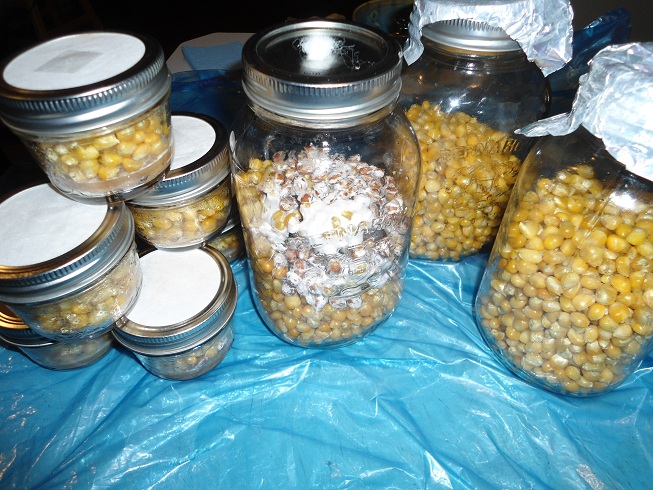 The new G2G jar after mixing. That mix ratio should move lightning fast. 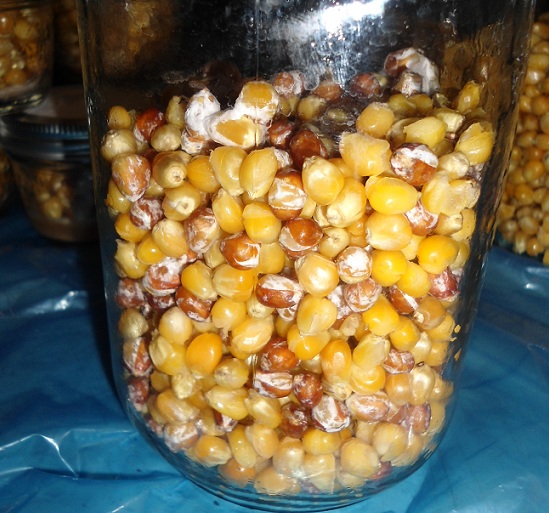 Because I was careful not to shake to hard to loosen the popcorn when transferring , the myc stayed intact on most of the surface of the agar. This allowed for instant refill of popcorn without having to wait for myc recovery.

Original G2G jars are starting to pick up as I tweak my heating scene.

It shouldn't take long to see some action on these latest transfers and inoculations. I'll keep you posted.