Yesterdays milked jars are bouncing back really well. It will be interesting to see how long it takes to get them back into milking shape. 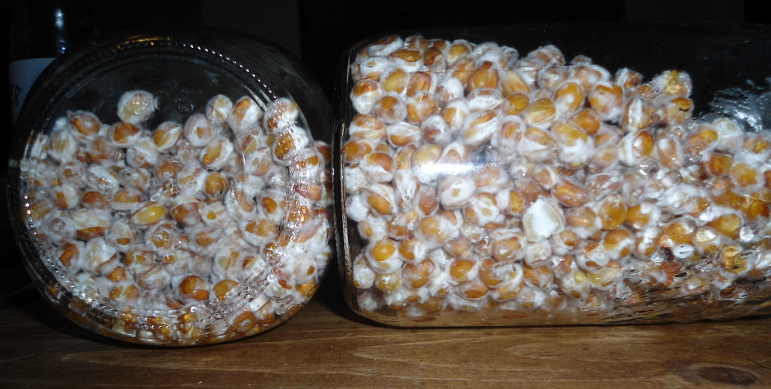 The first little myc-syringe agar-jar that recovered , but I put aside actually stated pinning ... including a fat early one that i may clone just to check it out. 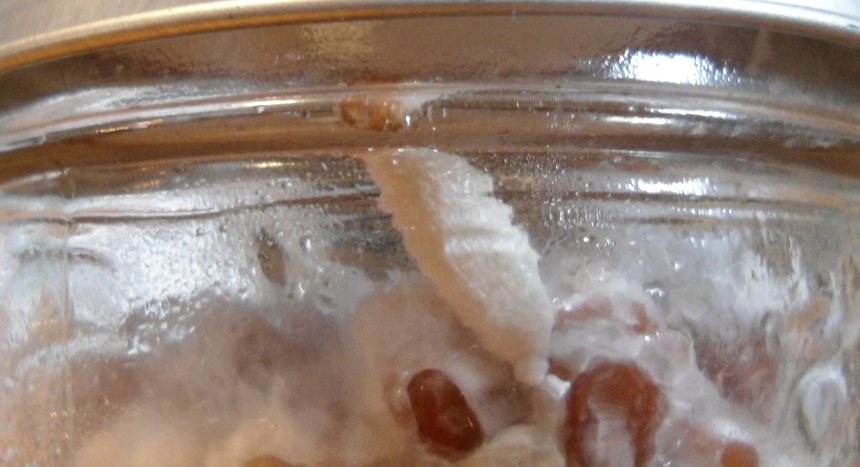 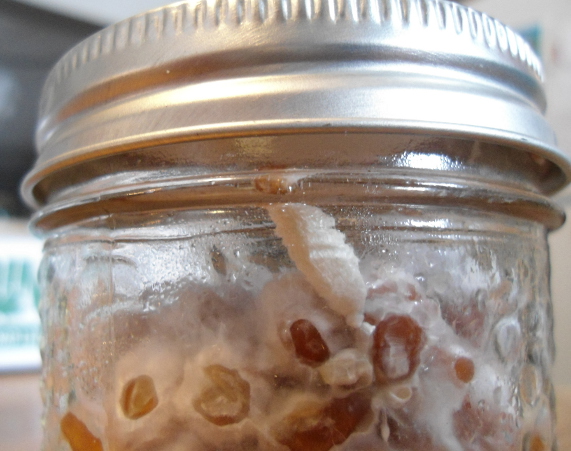 I've also got mycelium milk in the freezer. Here's a 10 CC syringe-full of myc frozen in time.

How long do you think is reasonable to have it frozen before trying to thaw and inoc ?

Gotta get the good metal glue/epoxy and really sand or scrape the top of the ring to make it rough so that it really adheres proper. Soldering might be the way to go although my kit is buried somewhere. I'll stress test this epoxy I got and let you know (there's so many fricking kinds). Even good old fashioned "crazy glue" might do the trick.

Let me know what you come up with.

do you think it could work with LC's

Yup , so long as the lids are the same size as the milking lid. You just need to put the milker on the sterilized grain jar first (or pc with it on covered in tinfoil), then in a glove-box-style clean area slip the lid off the LC (placing it in a clean holding unit) and slip the PC'd grain jar with the milker on it ... then you tighten up and super inoculate the grain jar , tip it back over to drain completely and take the milker off and place the LC lid back on ... or do another jar or 3.

I got the feeling when an LC is super-inoculated and then drained back it with add-back nutrients to itself , because when you shake and roll the jar around in the grain when inocing it , you get micro-particles of the grain washed back with it. I bet the LC would fatten up again if you left it at colonizing temps after super-inoculating.

This could really help edible/woodlover growers who want to amass a large amount of mycelium water through grain-milking and then super-inoculate and drain-collect sawdust , woodchips , etc to be used as spawn for bags etc. The difference being that spawning with grain can often lead to contams. Also as you can see colonization is lightning fast which also helps against contams ... and shortens time to fruit.

At some point I'll try this with woodlovers / edibles , but until then please feel free to take the ball and run with it. Let us know how it works.

Awesome work hyphae! Very interesting stuff. I wish we would of had a chance to chat/brainstorm before you spent all the time you did with the different parts.

I have spent probably half of my PC time testing what will and will not withstand the heat. Could've told you the tubing wouldn't make it lol.

The lid to lid idea is perfect. And to repeat what others have said " When I think of the list of names who have contributed new/unconventional/outside the box ideas, yours is right up there my friend.

I myself have actually tried something similar. Using plastic lids, rubber grommets and semi flexible stainless tubing with a poly airport to compensate.

I had to be the most successful trich farmer ever lol.

Now however, with your trials and errors, successful "milking" and detailed instruction, I might give it a go with this UK ps cyan. As it appears healthy, vigorous, and clean.

Just so many possibilities, I love it! Hmmm... now how to make it work with spawn bags. The PBH I'm testing is more similar in size and shape to grass seed. Not easy to manipulate once colonized in a jar. But bags.... yeah that just might work.

Keep it coming bro, this is the type of experimentation "Legends" are made of. :eusa_clap

The two lid bands don't sit entirely flush , so I squeezed them gently together with a clamp and 2 pieces of wood , then I released and applied the epoxy on both and pushed them back together and held with the clamp. See if does a good job. I think the key is scraping up the surface good before with sandpaper/butter knife.

Let me know if you find a good glue / epoxy that solidly holds two jar lid rings together. I'm using the smaller wide-mouth style , not the large ones , as I think they are easier to glue together and I have lots of quart sized or bigger small-mouthed jars.

You could always solder the lids together. This would form an airtight, pc proof, permanent seal. Soldering is kind of an art, but anybody with half a brain can glob it on there and make it stick. Now welding, well thats a whole 'nother animal.

I agree it might be the final solution to solder ... and or possibly weld if it could be. I was just thinking that as you mentioned it. You would only have to do it once and it would be good for a long time. You really only need a couple milkers around to get the job done , so it would be a short job of making them.

I'll have to find my unit and brush up on my soldering skills.

Thanks for the encouragement. I don't think epoxy (unless its a really good one) will stand up to much 15 PSI business. Please somebody also try soldering and see how durable it is.

The metal is too thin to weld, IMO. If it is possible, it would take a bad ass machine with some very lo temp rods. Then again, I am not a professional welder.

Welcome to the Machine

Do you think you could pour the mycelium milk directly into a bulk substrate?

I know Arathu was tossing that ^^ idea around. What if we pasteurized some poo a little on the dry side. Mix in your myc water, then add sterile verm to field capacity. The ratio would be the hardest thing to get down, IMO.

Hahahaha , I never bothered looking up anything as I birthed these ideas , but my first try at googling soldering jar lids now brought up a gem of a similar idea for storing things ... looks like soldering will be a go ! Even used their jars the same upside down on top way LOL.

Do you think you could pour the mycelium milk directly into a bulk substrate?

I mentioned earlier an idea I had about mixing heavy mycelium water with blended (sterlized/pasteurized) egg-carton pulp or similar. The pulp if made at the right mix ratio with myc-water makes an excellent spawn/slurry because it mixes well with the bulk material like manure.

I'll try some experiments and get back to you.

I know Arathu was tossing that ^^ idea around. What if we pasteurized some poo a little on the dry side. Mix in your myc water, then add sterile verm to field capacity. The ratio would be the hardest thing to get down, IMO.

Yah something can be done for sure. Need people to try a bunch of different ways of super-inoculating bulk spawn. I've been doing similar for years , but i mix the cardboard pulp with bulk materials and press them into pucks ... which works great , but I haven't tried for a large tub-shaped container.

You just have to deal with the excess moisture , which can be mitigated as you said by following certain steps. You may need to squeeze out a bit of excess water , but that's not to big of a deal really.

*new idea* Comes to mind that if you mix myc-water slurry with very well drained bulk sub material like Horse manure in a bucket and then thoroughly mix and then pour into a tub ... that tub could either have a drainage hole in the underside to allow excess water to escape by gravity...

Thanks to everyone for the support and comments. Special high-five to psycheholic
for inspiring me to "just solder the damn things" ...

The whole theme of this thread has been big things come in little packages and these simple milkers have huge potential. Without all the various experiments I'm running, If I just milked and made syringes or super-inoculated , I'd already have enough to do many hundreds of jars of sterilized grain ... all from half a dozen tiny agar/mycelium/G2G jars ... and they are reloaded for the second time as we peak.

Even though its only been 24 hours since I milked the jars ... they are rebounding like you wouldn't believe ! It looks probable for multiple milkings (fingers crossed). 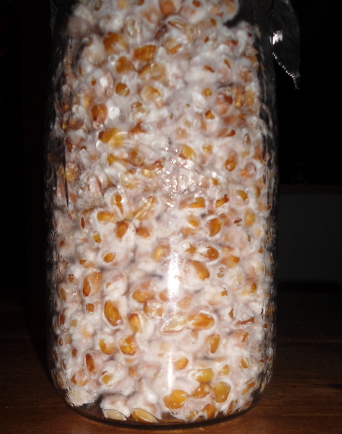 The jars that were super-inoculated last night are exploding with myc-launcing sites. 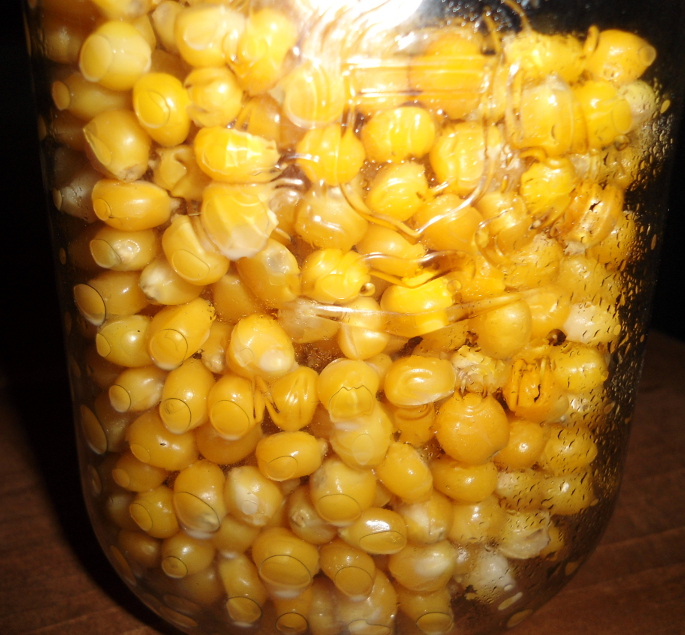 Subtle and hard to see at first ... but becoming more obvious by the hour. 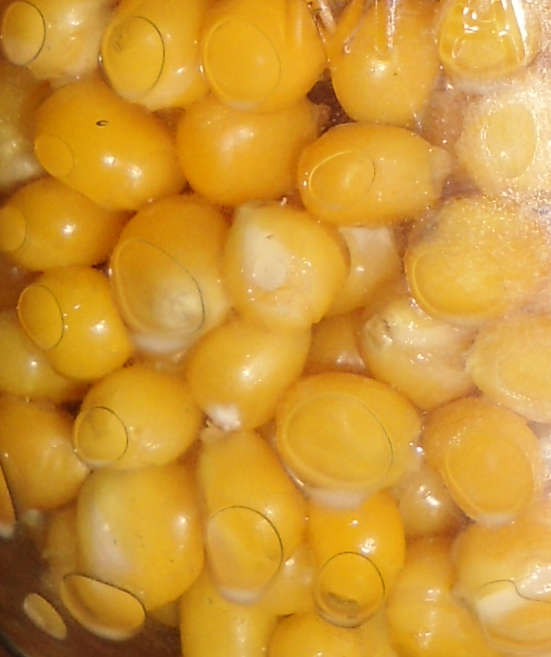 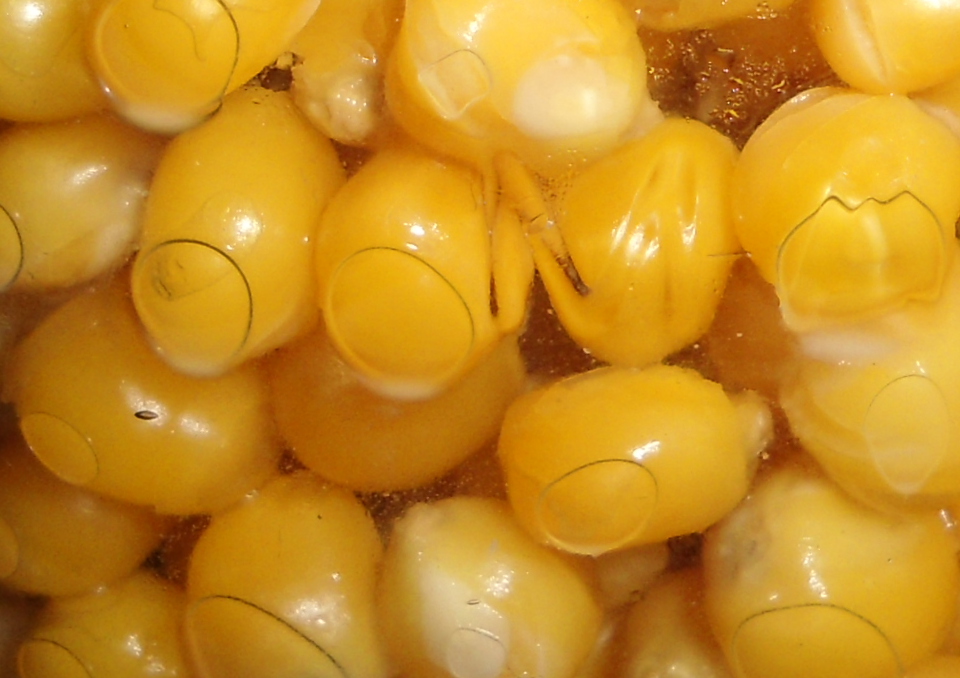 Can't wait to wake up and solder milking lids ! i am pumped.

Have you tried rtv silicone for gluing the lids? PC safe as well

Haven't tried RTV ... already spent more loot than I'd like to on various silicones/epoxy/supplies. Now I just need to dig out my soldering iron and get er done.

On another note , I thawed the mycelium syringe last night so i can try it out today. Still have the big frozen jug , but will start with a smaller experiment.

Haven't tried RTV ... already spent more loot than I'd like to on various silicones/epoxy/supplies. Now I just need to dig out my soldering iron and get er done.

With a lot of flux and well sanded metal a propane torch will flow solder well over large surfaces. Ought to work good to seal all the spaces once you have the lids partially soldered. The solder naturally flows into narrow spaces, which is why it works for plumbers. With two part lids the heat deformation should not be a problem because you are just heating the rims.

Super-inoculated jars are starting to show ryhzo myc after a day and a half. 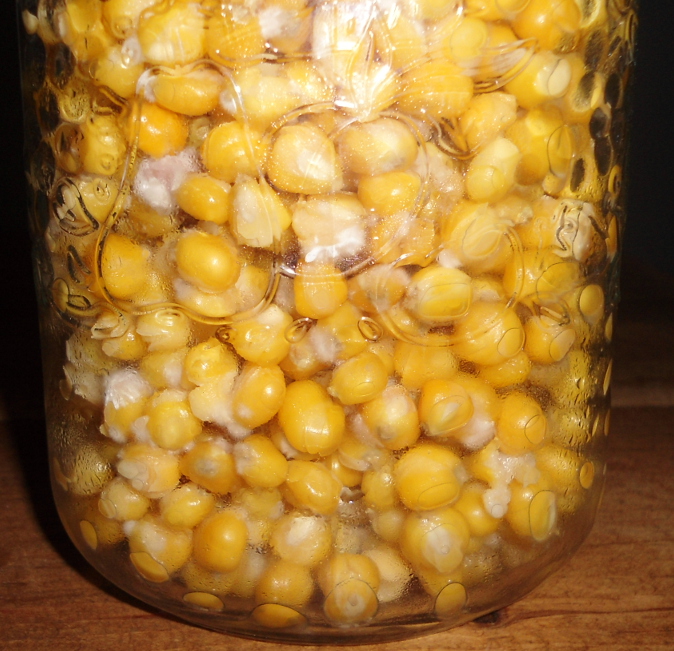 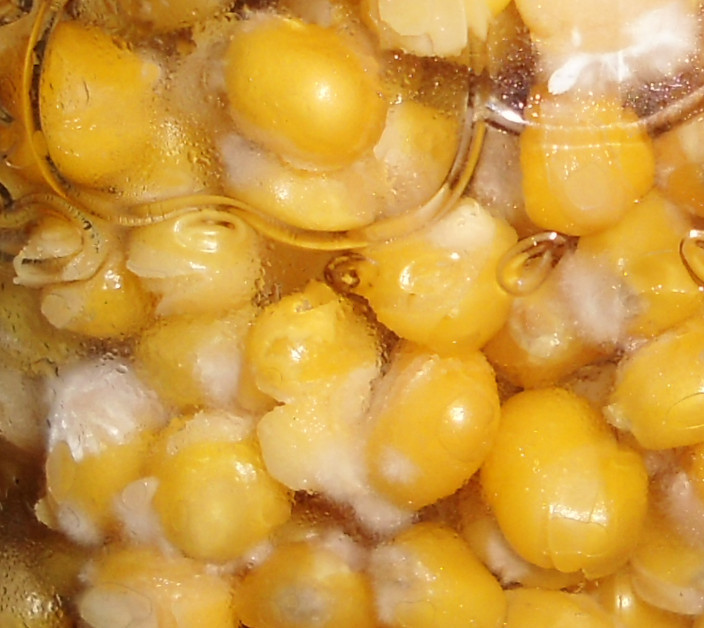