cops are your friends

Police in Minneapolis have not been defunded, and the media reports of cannibalistic chaos here are overstated. No one is proposing that we immediately get rid of cops; the proposals are to shift money to social workers, mental health and drug resources, etc., so that the cops are involved in fewer situations they're not equipped for.

This is an example of why we absolutely need to defund the police: 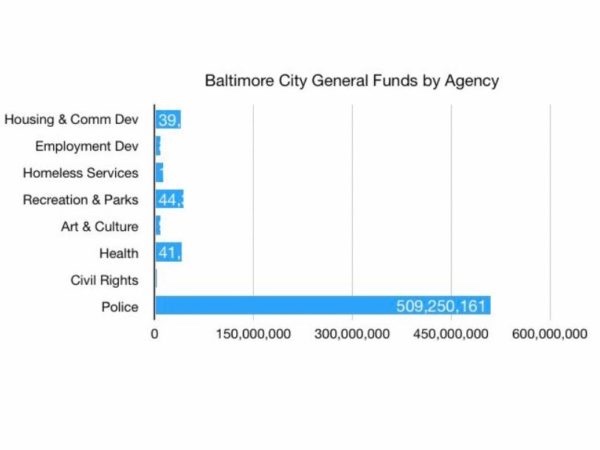 To me that chart also looks like evidence that we live in a police state. It's obviously not an "art and culture" or "civil rights" state. It also looks like Baltimore could cure homelessness without impacting the police budget too much, and eliminating homelessness seems highly likely to reduce the need for policing in general. We won't do that though since homelessness serves a purpose in helping maintain the status quo, as does that bloated and unconscionable police budget.

Here are a bunch of other reasons gathered up and presented as a thread someone wrote to explain this stuff to her mother: https://twitter.com/...254871664766976

De-funding is not the same as un-funding the police, which is what would eliminate them altogether. I'd be okay with getting rid of the vast majority though since I don't and won't call them for any reason, ever (with the possible exception of a situation where my dealing with it personally would unavoidably get me in big trouble).

Police in Minneapolis have not been defunded, and the media reports of cannibalistic chaos here are overstated. No one is proposing that we immediately get rid of cops; the proposals are to shift money to social workers, mental health and drug resources, etc., so that the cops are involved in fewer situations they're not equipped for.

I haven't read any stories about cannibalistic chaos, just increasing crime rates, found with any web search, that sometimes include 3 figure increases in the percentages year over year. That said, 2020 looks like it was also a pretty rough year (several months of which also include a pre George Floyd environment).  Defunding, unfunding shifting funds, no matter what way it's defined money got moved from policing to elsewhere in a pretty rapid fashion, with little opportunity to fill that vacuum. I'm not making claims about whether the police should or should not get this funding. I for one believe that the police are not in the business of deescalating anything and figuring out a more appropriate way forward would serve everyone involved.

I don't agree that "No one" is proposing immediately getting rid of cops. Probably nobody who should be taken seriously but they're definitely out there.

Also, ending qualified immunity, asset forfeiture and the war on people who use drugs would go a whole long fucking way to wholesale changes in policing...as well as simultaneously "defunding" them.

Things might be different in other cities, but in Minneapolis the police budget hasn't been reduced by very much - the police budget was reduced this year by about $8 million out of $180 million, or 4.5%. There's been an increase in crime, but these are difficult times: there's a lot of homelessness, mental health isn't great in general, people are hurting for money, and the city is doing very little to address these social pressures. Whatever the problem is, it isn't the police being defunded, because they haven't been in a substantial way yet.

This might be another case of trying to separating the anarchist's from the progressives goals. All these people running around in different cities for different reasons it appears a little muddy to me.

Honestly I think it is the major failure of the defund the police movement, there does not seem to be a clear cohesive goal that people can rally behind.

I wish there was a way to know everything

What does that eight million dollars less actually do I wonder? Who does it hurt and who gains from it.

Then, we now have, prisons for profit. Laws that put people in prison for victimless crimes. A "justice" system that favors the wealthy. Stupid drug laws. A corrupt pharmaceutical industry. And lastly companies that manufacture the equipment for militarizing the police. Whoops there's more: politicians who must protect the jobs of those, in this sick system, in order to get reelected.

In other words, it's not just the cops, but rather part of an entrenched system.

I think its the same with cancer research, and the drug laws. They're also part of entrenched systems.

So society is a tangle of entrenched systems.

Of course protesting the police gives people some emotional release, and the illusion that they are making a big difference.

Who knows? ... there may be some positive results, here and there ...

If one is interested in this issue, I've found the MPD150 project to be thorough and thoughtful. It's written from an abolitionist position, but I think its analysis of the situation and proposals are realistic and much better formulated than the sound bites in the news on either side (and than talking heads on youtube).

FLASHINGROOSTER: what's wrong with anarchists? Seems ironic to me to have an issue with anarchists on a forum centered on social change and personal improvement through cooperative, illegalist skill sharing...

Well that is an easy answer.

While I might agree there is some illegal skill sharing. Nobody on here use's violence and destruction as a tool to push that change. It is quite the opposite in fact. I support Gandhi and change through peaceful protest. If you think that doesn't work or we tried that then you should have been paying attention in Hong Kong. If not for the pandemic it looked like they were gaining momentum against one of the most authoritarian governments out there. You want to see what anarchist do look up the Vancouver hockey riots, they can turn crowds into powder kegs

Some say the intelligence agencies place provocateurs to cause destruction so they can roll in the riot control and bust the protest up, violence does not work.

I have been trying a new thing where we ask our own side to quit the bullshit. Rather than have a conservative squawk about anarchist or a liberal about fascists would it not be better to hear it from your own team. Nobody listens when being yelled at from the other side of the isle. When we make excuses for the extremist it seeks to undermine the entire ideology. (Something I am trying to get away from as well). So fuck the fascists, and fuck the anarchist is my new saying. They seek to destabilize us all and re write reality to better fit their ideas.

Anarchist are for when the secret police start disappearing peaceful protestors off to forced labor camps. There is a time and a place where I would be for that kind of behavior but now doesn't seem like the time. We need more harmony not more division. It seems like too much of a gamble to risk destabilization. If your wondering what that looks like take a peek over in middle east, particularly in Syria and see where all that violent revolution has gotten them. The media has done a fantastic job of making revolution look like one day job where you take over a city and you win. The reality is years of bloody endless battle that will effect the country for generations

Did you think the use of violence at the capitol hill should be excused away as well? I doubt it

But that is a discussion for another thread... going there now