It's been a while Mycotopia - I've been pretty inactive most of the summer.  I had a very promising Gymnopilus lute and Panaelous cyanescens (Hawaii) grows going on, but due to severe neglect and half assed pasteurization, they both succumbed to trich; which bummed me the fuck out even more.  Now that things have settled down, I’m trying to get back into the swing of things.

I purchased MEA from Fungi Perfecti and plastic petri dishes/disposable scalpels from Amazon.  I followed the directions on agar jar, let cool, and inoculated the plates in a SAB.

Honestly, my first attempts at agar are mediocre and awkward; the SAB really limits your dexterity.  I transferred some of the most rhizomorphic sectors (for practice).

After three transfers, I felt I had some decent agar plates to work with (rhizo and contam free); I prepared quart jars of rye berries – pressure cooked for 90 minutes at 15psi and let cool overnight.

I’ve G2G’s before, but this would be my first time transferring agar wedges to grain.  Again, it was awkward and clumsy working in the SAB, at least for me.

Shook the agar wedges and grain and let them sit, on a shelf, at room temp; and sit they did – probably 6 weeks past 100%.

I finally spawned them to bulk on August 15th.  Soaked the grains prior to spawning.

I spawned 5 quarts to ~ 7lbs of a manure based mix.  I also used a black, heavy duty, trash bag liner.

This was my first time growing using a traditional monotub – set and forget style.  Call it beginners luck, but I definitely like them – no ultrasonic humidifier to refill, etc.

This is August 29th – 7 days after tub was put into fruiting conditions.

Not seeing any resemblance to PE

Have you studied them and noticed a difference in potency?

From what I've seen they look like PE6 to me, I think theres some variation in that strain and you essentaly have a isolate there ...but even if they aren't you gained a world experience in pretty advanced techniques good f*^+ng job IMHO

this was my firends pe6 grow, sometimes it gives 6-7inch long dicks, usually in the later flushes 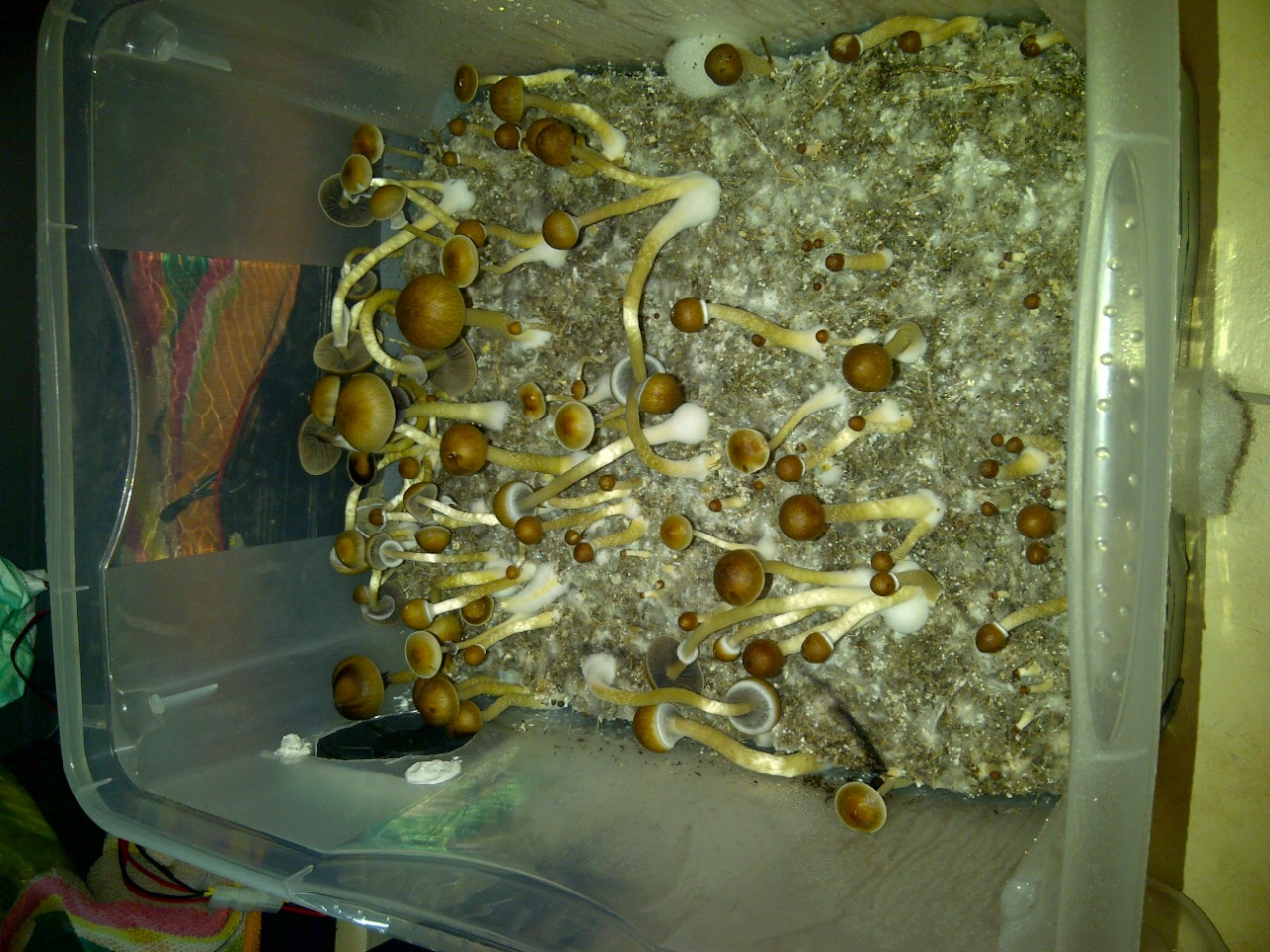 potency wise, they are more potent then the regular, 0.7g/person had a nice effect

My only PE6 attempt contammed, but every pic I see they look like regular cubes. The potency is definitely there though. I ran across some a while back and enjoyed thoroughly. I really need to get my APE, PE uncut, and PE 6 cleaned up on agar to enjoy these other varieties.

depends on the genetics really...

I haven't tried any yet personally, so I'm unsure of the potency.  The PE I had grown just prior were supposedly very strong - 1.5g was almost too strong, even for experienced trippers.  After many cubes, Ps. tampanensis/galindoi ATL#7 - I'm definitely germinating some other species I haven't tried yet on agar.

Back to Agar & Strain Isolation