How Cronyism Is About To Kill Florida Micro-Breweries


8 replies to this topic

Feel free to move this to The Trip On Inn. I put it here because I thought it'd get more play...and it fits here too.

this is interesting although nothing new.  inbev has had a monopoly over beer since the beginning.  Im pretty sure most of the good breweries in florida like cigar city use a distributer because you can find their beer all over the state.  unfortunately breweries like PEGs unicycle may be effected like this as they brew/sell on a smaller scale, and sell privately from their brewery.  I guess this just comes into concern when defining macro vs micro.  at which point does micro become macro?  in this case I guess it is 2,000 kegs.  Im wondering how much beer this is in 12oz bottles.  should this definition of micro/macro be held to the standard in every state or individually defined?

As I sit here and think about these issues I am reminded of the market in mexico.  They have stuff like this in every sector only amplified.  in fact I think their macro sector is made up of 2 companies, and if you want to open up a micro brewery you have to purchase all you supplies at a mark up from the macro.  you cannot purchase bottles and such independently.  this is how they keep the underdog from rising up.  similar problems with cell phones (1 company), cable (same company as cell phone) ect.  its a great way to allow for consumer protection when there is no competitors to confuse the consumer on which product to pick.  haha.

According to your math there are three unaccounted bottles of beer.  Sir, would you step over here and open up your bag please…   LOL

When you look at the numbers it helps put to scale what is considered ‘micro’.

Still, the whole concept of having to buy back your own product at a considerable markup to be able to sell over a set amount is BS.  This is supposed to help the consumer how?

I assume those three bottles were lost in "rounding up/down", but I admit I've been smoking!

3 tier system is alive and well in other states too!

ok cool and in terms of barrels which is what most microbreweries post production as I think 2000 kegs is equivalent to 1000 barrels.  for instance my favorite micro brewery caps off their production at 2000-3000 barrels a year.  this would put them well over that limit, but then again with the ant of cash inflow from that amt of beer is pretty significant especially when they piece it out at 18 dollars per 1/2 gallon.  lets do the math some more:

from gummalls math we get 15.5 gal in a keg so 15.5 x 36 (price per gallon) comes out to be 558 per keg.  if they are capping off at 2000 kegs a year that'd be $1,116,000 dollars in beer a year at 2000 kegs and they produce upwards of 6000 a year so thats over 3 million in cash revenue brought back in.  oviously its not all profit but thats pretty significant however not nearly as much as inbev gets off busch alone.  these figures are from my favorite "micro" brewery which sells beer by the 1/2 gallon at $18.00 a pop cash only no distributer.

I wonder how much pegs cycle brewing in Florida produces a year.  I'm sure cigar city is well over the limit.

Microbreweries are defined as producing less than 15,000 barrels/yr.

ok thanks mr gumball that puts things into perspective. its a lot of beer but I imagine only a fraction of the ant that macro produces. 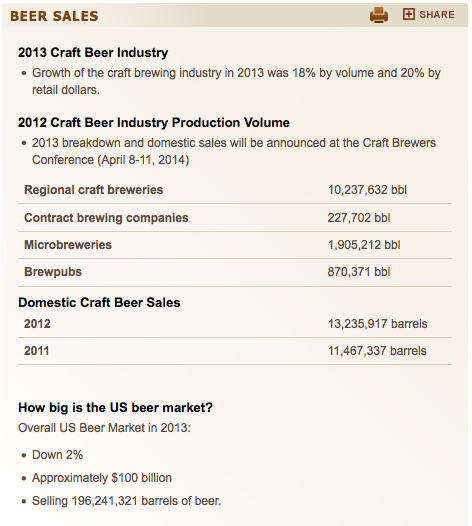