Holy shit! Something stole my prized hedgehog. Hopefully I find it growing in the ground...

I’ve taken an interest in these guys and here is what I have so far. Some prickly pear, dragon fruit, and the smaller ones are unknowns from my yard. I have no clue what I’m doing, but for some reason, I’m drawn to them as painful as the learning process has been. I’d like to explore further in the deep end of this area once I learn how to properly care for them. 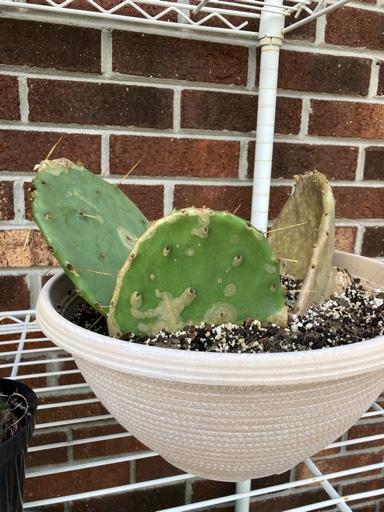 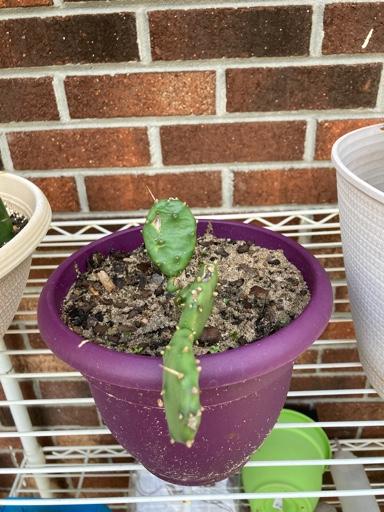 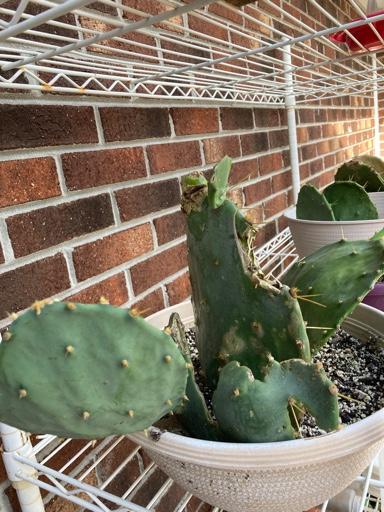 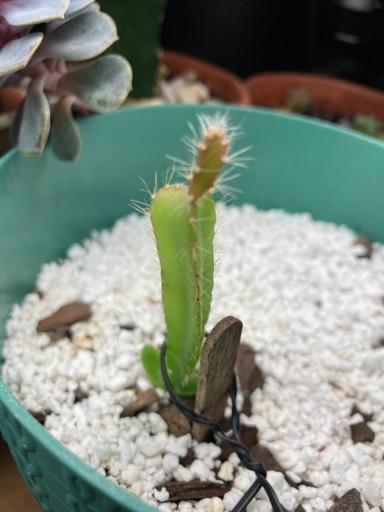 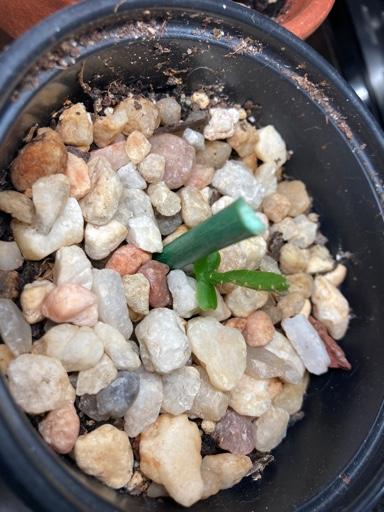 Sent from my iPhone using Tapatalk

I finally got around to potting up some cuttings I got awhile back and when I unwrapped them one had some brown creeping up the shaft probably to halfway . Was it rotting or just running out of water or???


I can try and get a pic tomorrow .

Put them into some bagged cacti soil mix that was slightly moist to the touch so I didn’t add any water to them . They’re inside and out of direct sunlight .


I finally got around to potting up some cuttings I got awhile back and when I unwrapped them one had some brown creeping up the shaft probably to halfway . Was it rotting or just running out of water or???


I can try and get a pic tomorrow .

Put them into some bagged cacti soil mix that was slightly moist to the touch so I didn’t add any water to them . They’re inside and out of direct sunlight .


Could be rot, could be corking. If the brown spot is softer than the surrounding green, it's probably rot. What were they wrapped in? Could have been too humid which allowed mold/rot to take hold.

If it is rot, drying out might work, or it could require surgery. If it's a thicker hard brown shell, it's corking which is basically surface scarring caused by surface irritation.

I've also heard that bagged cactus mix is seldom good for cacti. Not sure what you have, but I know that Miracle Gro mix is basically just coir.

Looks like corking . The room could’ve had some humidity issues as I’ve found a small crack in the wall where some water seeped through .

They were wrapped in paper towels .

The soil mix looked like a bunch of coir when I was filling the pots . I’ve got pea gravel and sand I can cut it with maybe a 1:1:1 ?

Is that pup sending off a root ?

It's time for the annual migration of pots from deck to covered porch. Usually by the first of October I have the pots out of the rain and under a roof but still outdoors so they don't get any more rain but still have good sunlight.

Then, BOOM, just before the first frost they all get humped down into the basement into a dark room and forced into a dry dormancy.  Works like a charm to prevent etoliation up here in the Great Lakes Icebox.

Gotta figure out what to do w/ my pair of cacti. I suspect that both could use a re-pot w/ better soil, I don't think the sand is cutting it nutrition-wise. I'll also have to cut and root the etiolated section so it doesn't topple over. To give an idea of how the Psych0×Kathleen grew: the 8th areole from the soil was the top when I received it 11/2020.

The loph will go on the North porch to overwinter, it seemed to enjoy that last year. But I may just move the Psych0×Kathleen back a few feet so it's mostly shaded, but still gets a ton of indirect sun.

Their first year wasn't ideal, but it's exciting to have some more cuttings, grafting stock, etc. 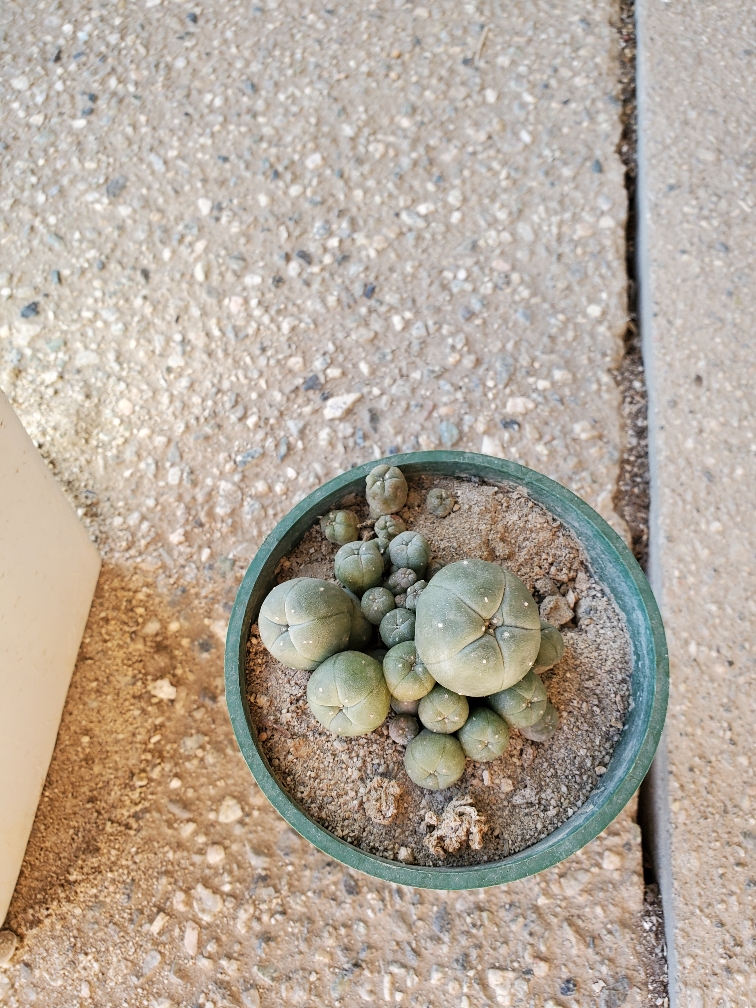 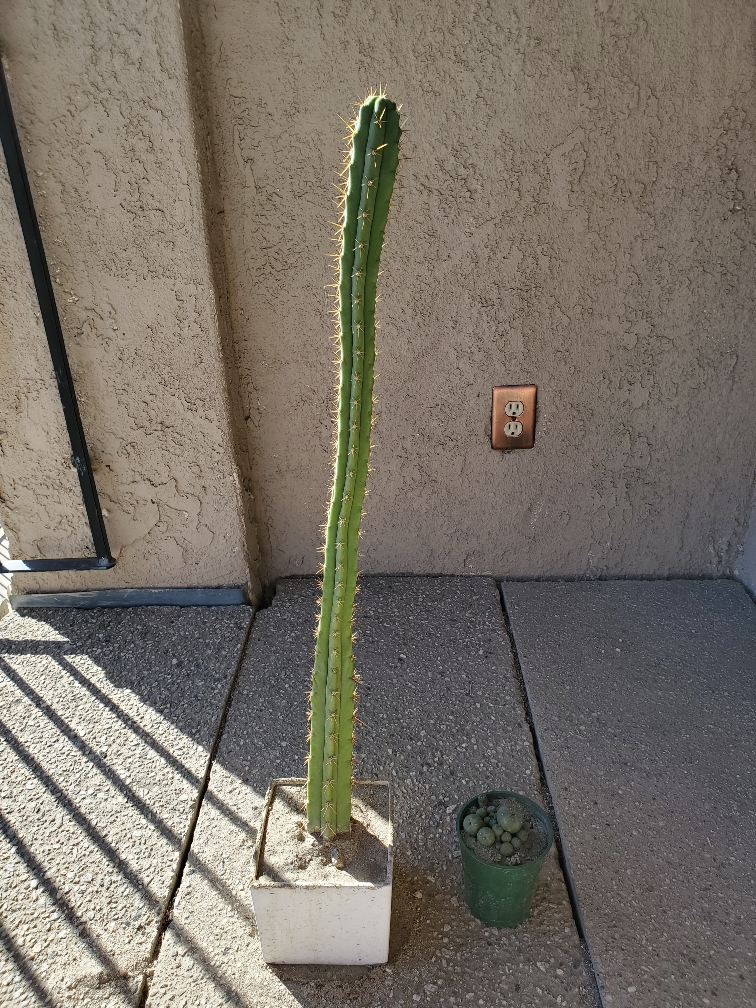 you can mix some well composted cow poo and a commercial cactus soil with your sand and do just fine. looks like the column would like a balanced fertilizer too.

you can mix some well composted cow poo and a commercial cactus soil with your sand and do just fine. looks like the column would like a balanced fertilizer too.

Yeah, that's basically the plan: perlite, compost, sand. I was using the Schultz cactus fertilizer that goes directly in the pot, but I was inconsistent and I'm out.

My Tunjo started rooting on top of the graftstock. Found it impossible to remove from the graftstock so I did the weirdest thing I ever did: I cut the roots of the rootstock and planted alltogether in carefully selected mineral soil. I give it minimal amounts of water during winter season so let's see what will happen. 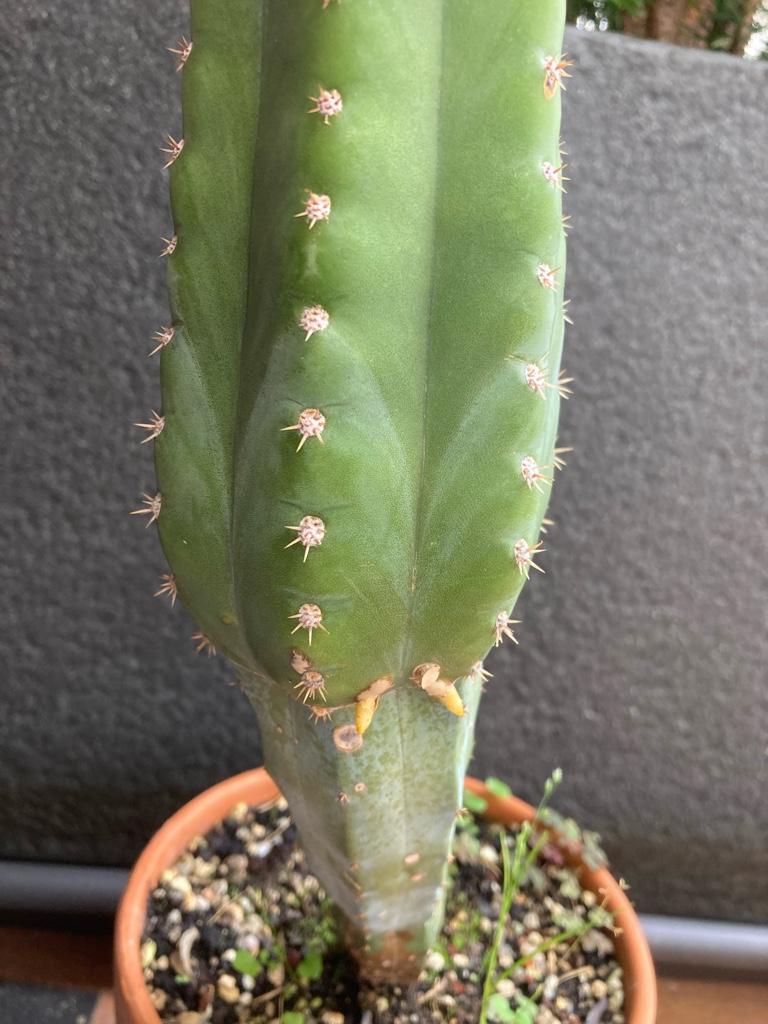 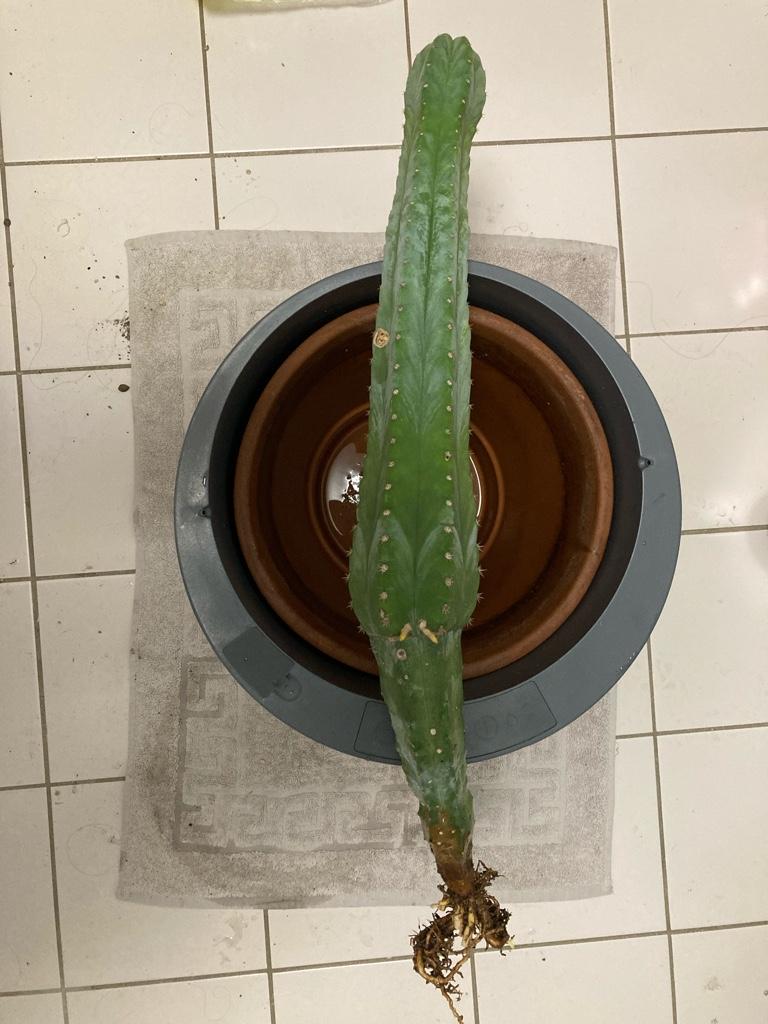 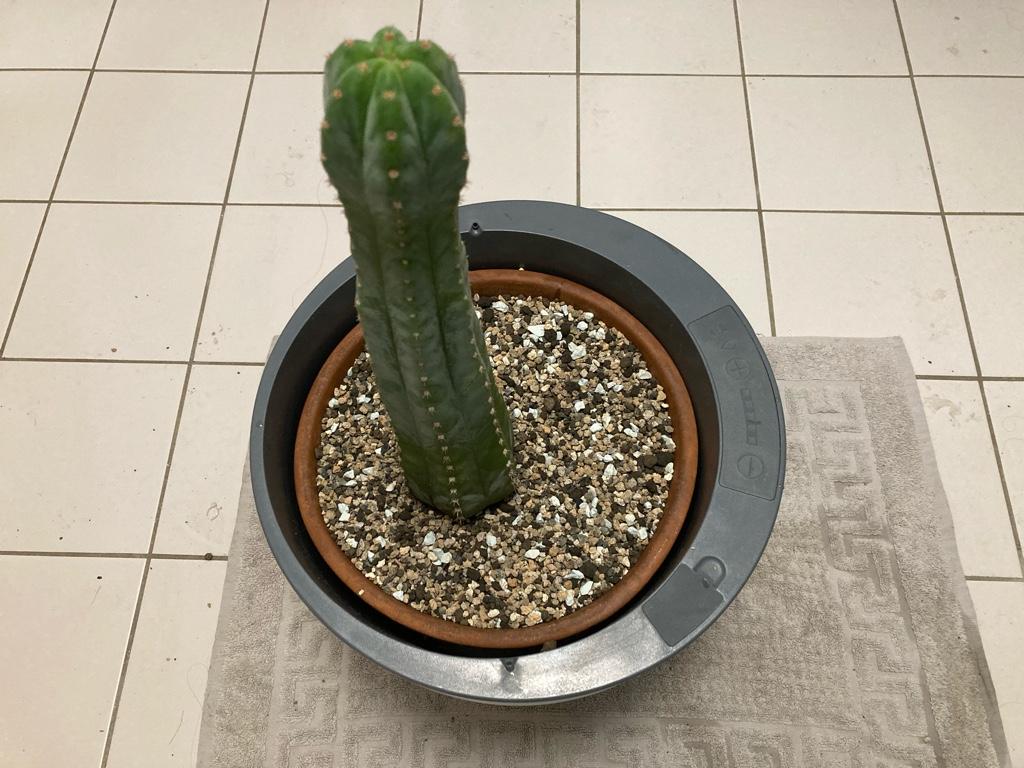 I would have done the same Alpoehi. Where the roots were growing out, is the widest part of the cactus, and rooting it at that point will give it the most stability, and the most mass of roots for optimal feeding and growth from this point on.

Some say lophs like growing in groups.
True for that container: 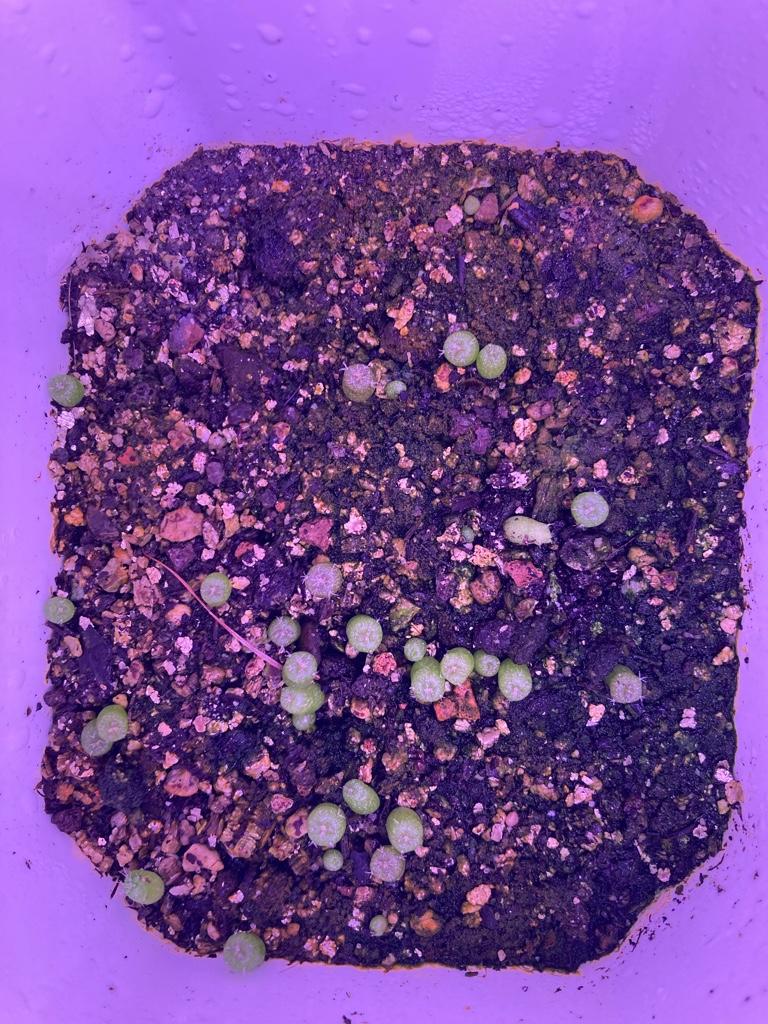 I purchased a tub with 6 of such containers inside of it. With 2 clamps on its sides for pressing the lid almost tight to the tub you can create near perfect conditions for growing cacti seeds - very humid and warm.
I use a heat mat for reptiles under the box to raise the temperature to a minimum of 90 F.

Ironically lophs and tricho seedlings want tropical climate - if not to say rainforest constant raining conditions - for the first weeks.

After a month or so I remove the heat mat to make the climate more moderate, also to prevent rotting of the lophs in particular.

Lophs do well in the first few weeks, the more difficult time comes after that. I remember from my first loph culture only one survived and that because I grafted it. 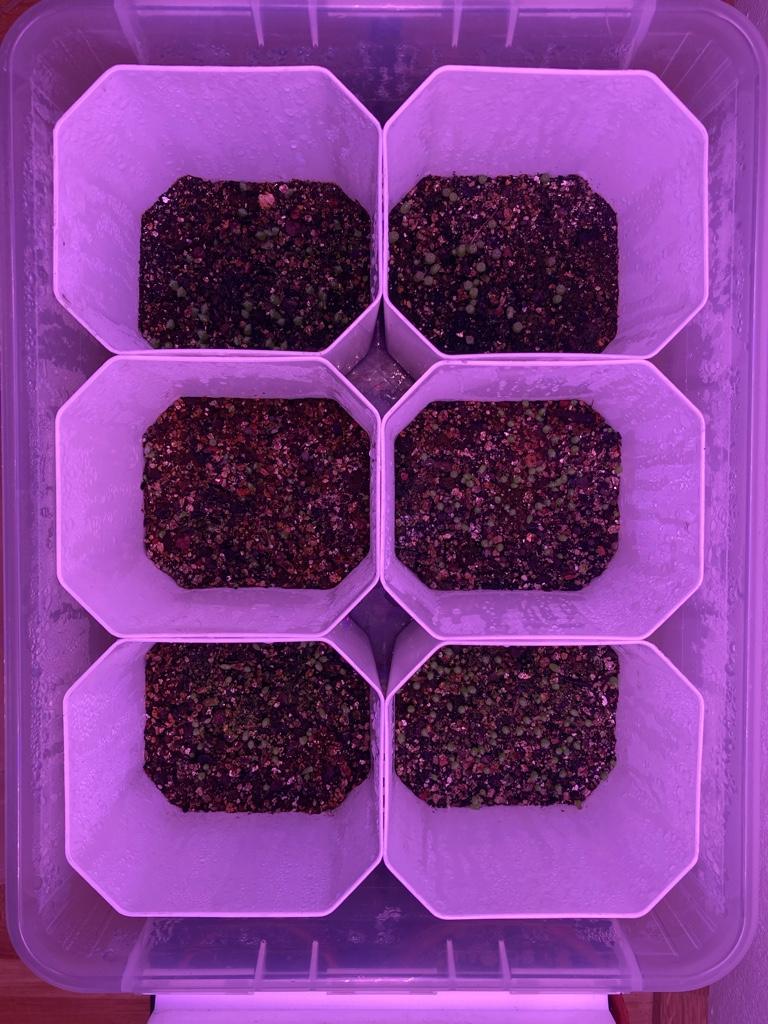 
Looks like corking . The room could’ve had some humidity issues as I’ve found a small crack in the wall where some water seeped through .

They were wrapped in paper towels .

The soil mix looked like a bunch of coir when I was filling the pots . I’ve got pea gravel and sand I can cut it with maybe a 1:1:1 ?

Is that pup sending off a root ?


Sorry for the late reply: that looks like corking to me as well. And yes, that pup is putting off roots.

You could probably cut and root the pup. Or you could re-orient the cutting horizontally w/ the pup roots in the soil. That may help the rooting process for the main cutting, and you'll get a lot more pups coming off it. Or just leave it and see what happens.

You could probably get away w/ the coir so long as you are careful w/ watering. You just don't want it to be sitting in damp soil for too long. Perlite or gravel may help w/ airflow to dry it more quickly. IME, sand can hold onto water pretty well and may not be good to mix in w/ the coir.

Has anyone used Crumps succulent and cacti mix?

Mycol, looks like corking, shouldn't be a problem. The pups tend to break off and root into the soil. Before you know it, you'll have a pot full of them, blooming.

Got a heating mat and made 2 more trays of some lophs. This mix has worked well for germing lophs in past. Now I'll try and leave 'em be.

https://johnsonsgard...g-mix-4-qt.html
Expensive stuff but the mom and pop local nursery has it.

Well guess Crump is a greenhouse localish. Some tips if you search his name on repotting and not sure what else. (currently skimming)

Potted some cut up PCs. Replanted some trichs. Scared I was a bit aggressive here, really hard to get these guys in this minerally mix.

Assuming it's the wrong season to graft.

I finally repotted all my cacti last week, and it was quite an adventure. The main hurdle was that I ended up ordering Fox Farm Ocean Forest because someone in the reviews stated that its NPK was .4-.1-.7 (wasn't stated in description, or visible in photos), I had some bone meal to boost the phosphorous a bit, and I was mixing it w/ perlite as well as sand. However, the actual values on the bag were .3-.45-.05.

After a bunch of research, I decided that my best course of action was to use some wood ash to boost the potassium. So I used some wood charcoal ash, weighed it out to bring the potassium up around .4 (ended up being ~2g/qt of soil). I then mixed the soil w/ equal volumes of perlite, and the sand that the cacti had been potted in.

The seedlings are really looking great. After re-potting, I put them on the north side of the building, and covered them w/ a white cloth. After a week of that, I uncovered them and they have only gotten greener, no red yet (which would happen before). The pot on the left is Ikaros, the right is open pollinated Kathleen.

I also re-potted the Psych0 cross, but didn't realize how root bound it was. I didn't have any pots big enough, so I cut the top off of a water jug and cut a lot of slits in it to help dry the soil. I think I have to find a 2gal pot so it has some room to grow.

I also cut the etiolated growth from the Psych0×Kathleen. That cutting was cut into 3×5-6" cuts and left to callous for a week. The end cut looks really good. I doubt that there are any roots yet, but the growth before I chopped was looking great. The other two cuttings are rooting log style.

De-potting my loph was not very easy. The sand was so compacted, but I managed to coax it out with some gentle squeezing. The root structure was really nice, stretching all the way to the bottom but not root bound. The tiny cluster got its own pot, as well.

I should have taken pics of the roots and stuff, but I didn't think of it at the time. And the white powder is a sprinkling of rooting hormone that I forgot to do when potting. I gave them a touch of water just to wash some into the soil, but not enough to make things damp. 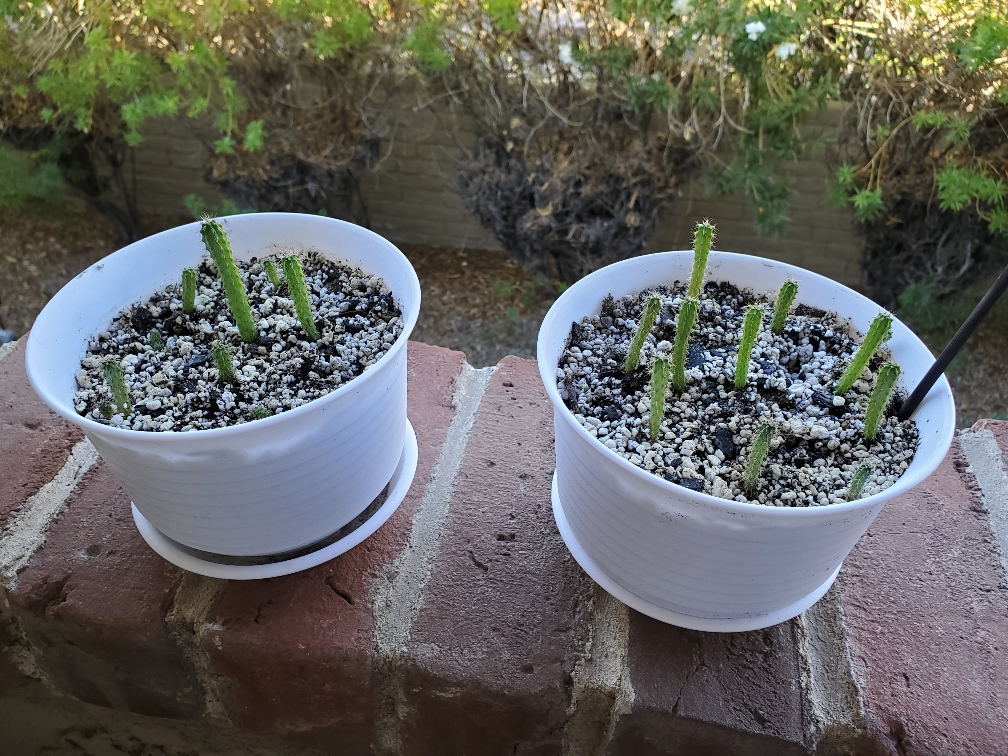 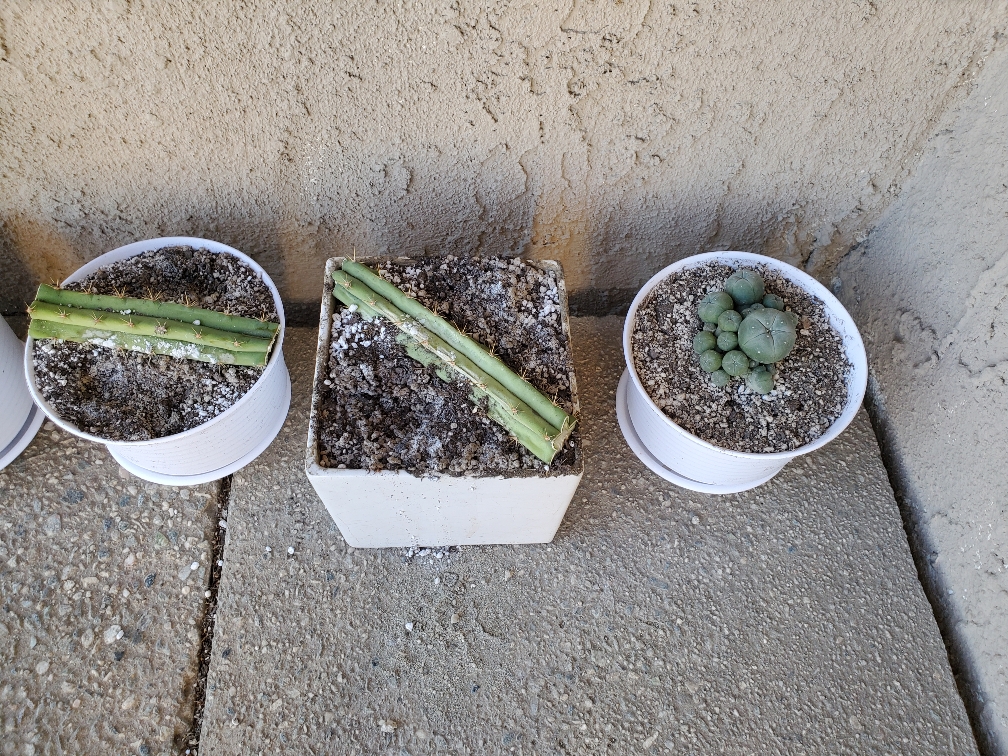 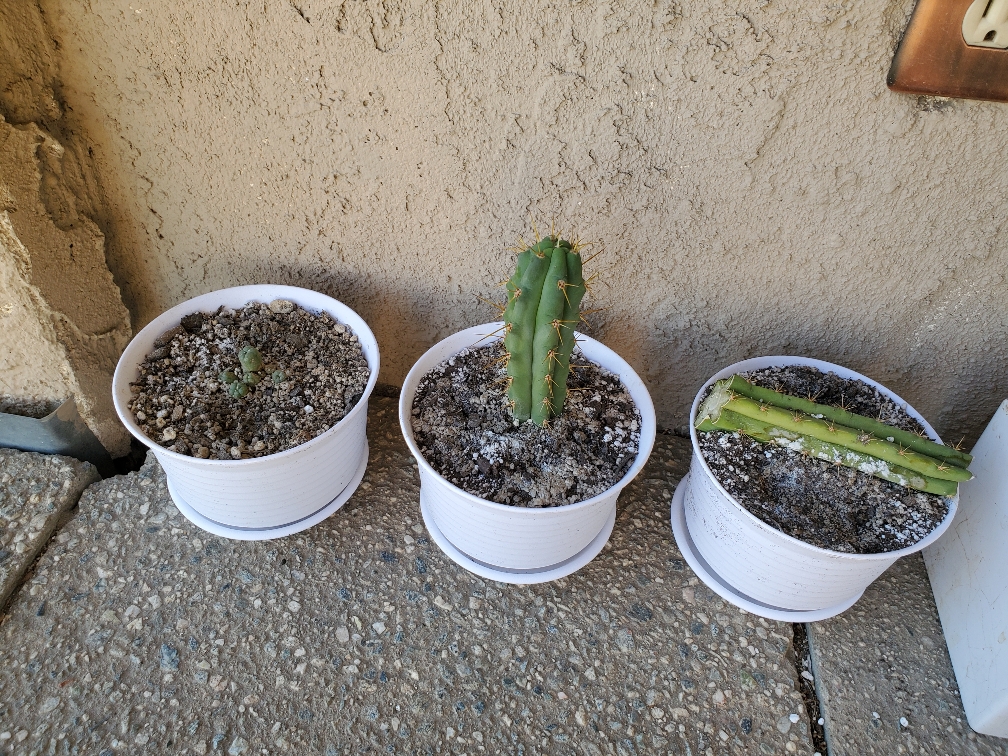 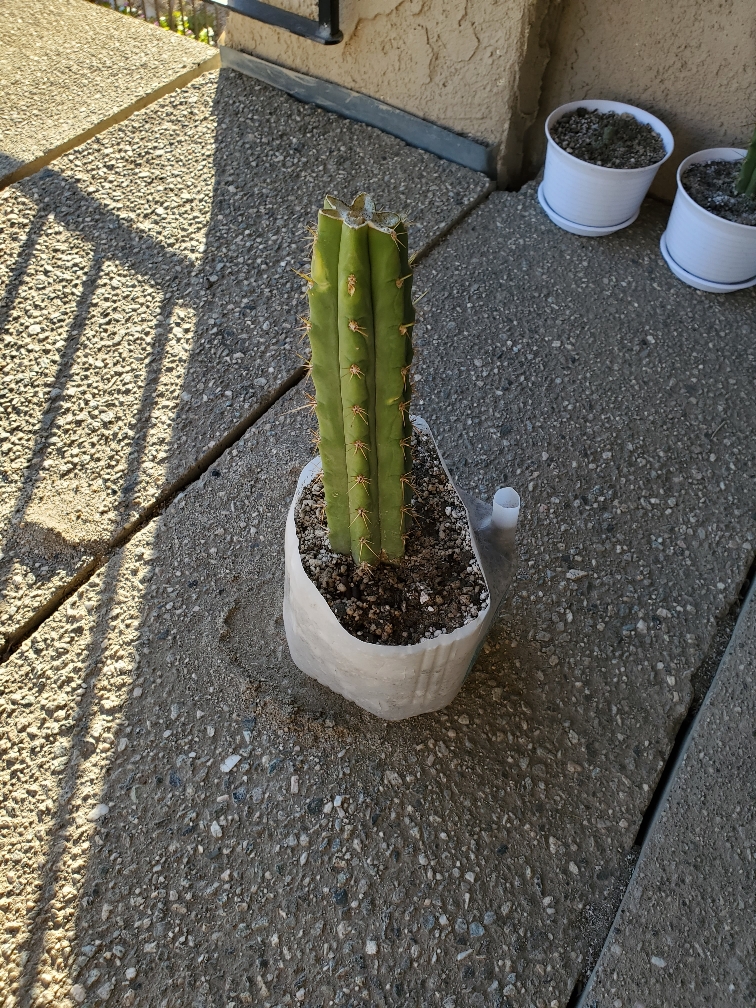 That double flower though

That double flower though

Looking good!! I can't wait to see flowers and mature tufts on my lophs.