Really now, where on Earth do they run off to? Chuckle! You are alright, my friend, 1967

where ever they run off to ide like to join them and im not trying to sit in customs in doing so.. there is all kinds of williamsii posted on ebay from Germany and Thailand that look nice but if you read the comments people are getting screw over by either wrong picture or customs taking plants even when expedited shipping is used.. I guess ill just have to wait till my day comes and I see what I want CLREARLY

where ever they run off to ide like to join them and im not trying to sit in customs in doing so.. there is all kinds of williamsii posted on ebay from Germany and Thailand that look nice but if you read the comments people are getting screw over by either wrong picture or customs taking plants even when expedited shipping is used.. I guess ill just have to wait till my day comes and I see what I want CLREARLY

Not that im advising the illegal trade of this majestic plant but most often the best way to safely obtain peyote seeds or plants it buy building reputations and friends on forums and other forums of media. You still take a risk but most people are nice enough to share something with you once they know you long enough.

While others may not hold this opinion: i think many times peyote seeds or plants come to us when we are ready to have them. nothing wrong with trying to obtain them, If you get them than thats good. But most often places like ebay and amazon will rip you off on Loph seeds.

Amazon will send you seeds, but for other cacti most of the time lol

Plus in all honesty im pretty sure all that ebay and amazon online shit is tracked. but whats not these days

yeah i know, that's how my mushroom adventures took off because of a friendly member here donated a spore print  and have a source I can purchase grown peyote plants from once a year and by appointment but I feel weird to set an appointment and only buy peyote or sanpedro (since I haven't scene many other active species he grows). he has many other cacti but im only really interested in the active kind along with others that display things like the golden ratio and Fibonacci sequence ex..  ive been leaving hints that im looking for seeds and I thought someone was going to offer me something after feeling bad seeing one rotted away (which the graft didn't take and rotten away completely) they asked if it was my only peyote and I didn't want to lie because its not and I never herd back..  in due time

as far as my garden grows.. it grows out of control. not doing much outdoors this year.

My wife knocked these guys off the shelf today breaking their clay pot and spilling them onto the concrete..............I re-potted them and now pray...

Peruvianus that are slower than lophs

Pachanoi hybrids that are insanely fast

And this Pachanoi hybrid will probably overtake it's Bridgesii cousins over this summer......I don't know what to say about the genetics.....

Arathu, other than if the little lophs were cut or mauled by sharp pot shards, they should be fine. Your Kactus Korners obviously no longer fits in any kind of corner.........

The last few days have been scorching, so water has been given. 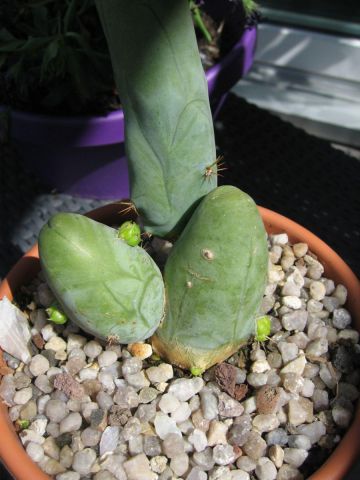 I love the way TBM grow.

After my divorce, I needed a new penis,

The last few days have been scorching, so water has been given.

I love the way TBM grow.

Dude you have some nice Penis cacti. I hope mine puts off more pups.

I only have three little knobs right now lolz.

I have had some sprouts come up :) 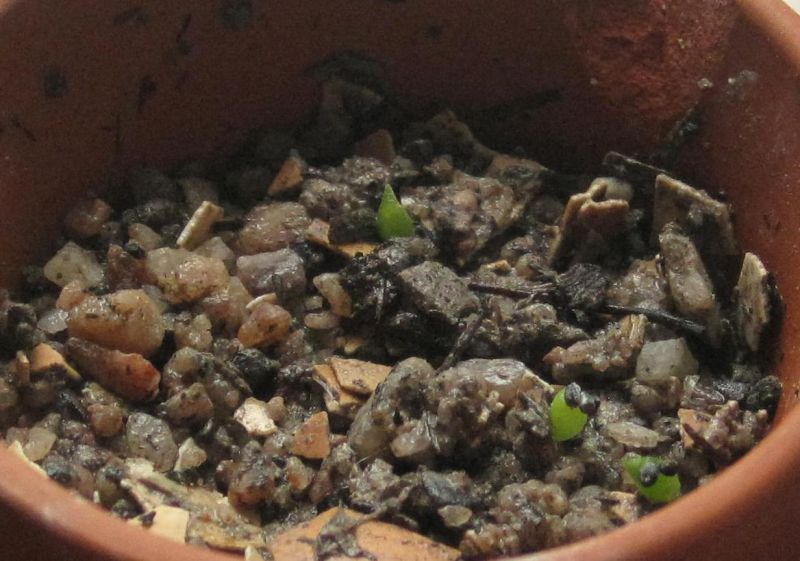 these r these ones 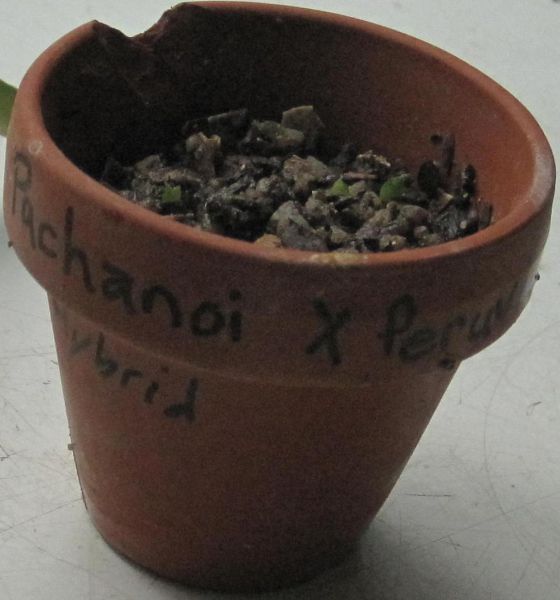 and this one too 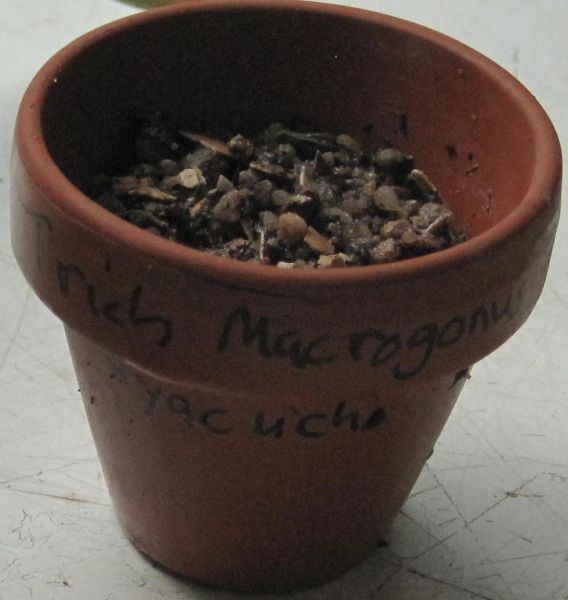 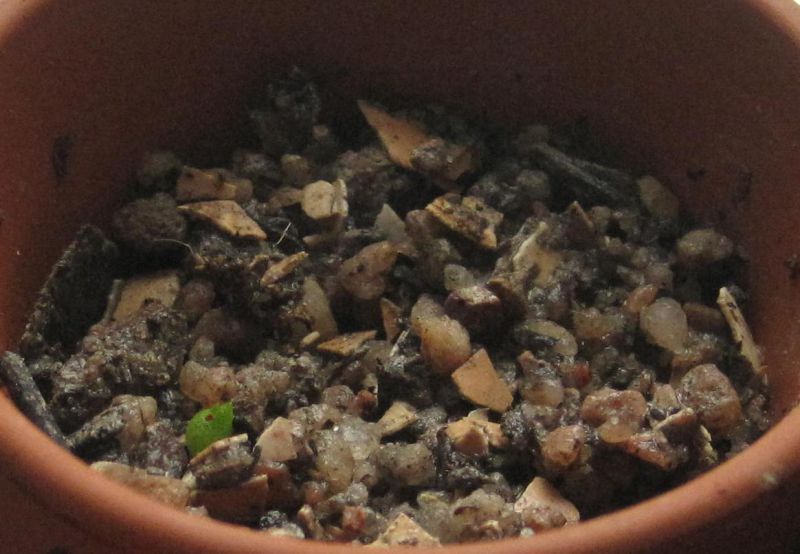 I love watching the babies come up :) 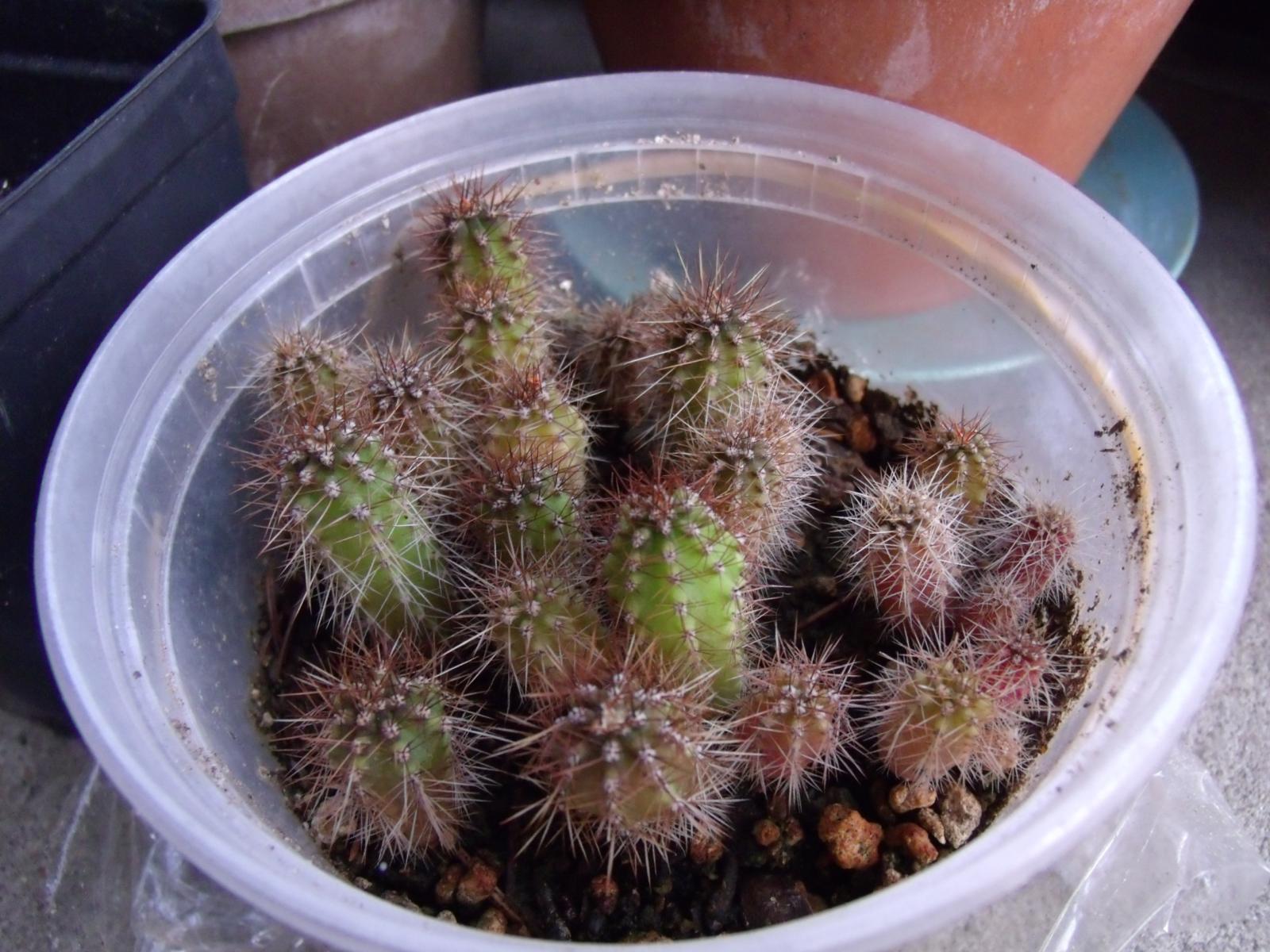 see how these r slightly pink I have one that is really slow compared to its friends planted the same time from my trich mix seed pack and the slow one turns pink and it has the same sun as the ones right beside it and grows very slow it is less than half the size  I repoted it and it has one other one with it now it will grow new growth green then turn pink over the winter........?? 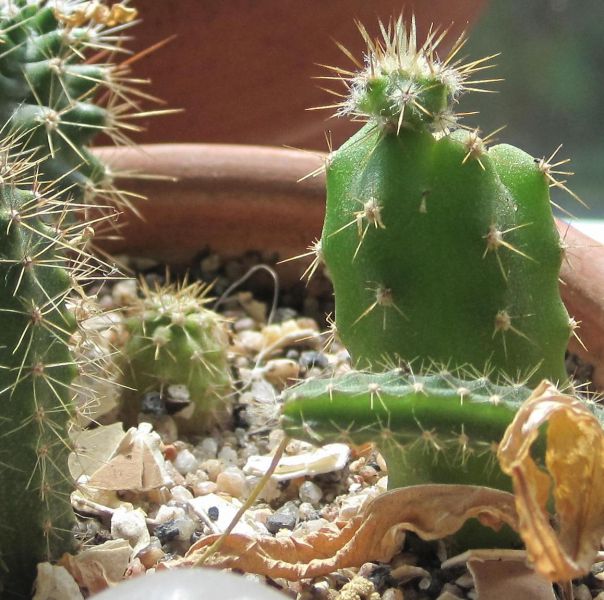 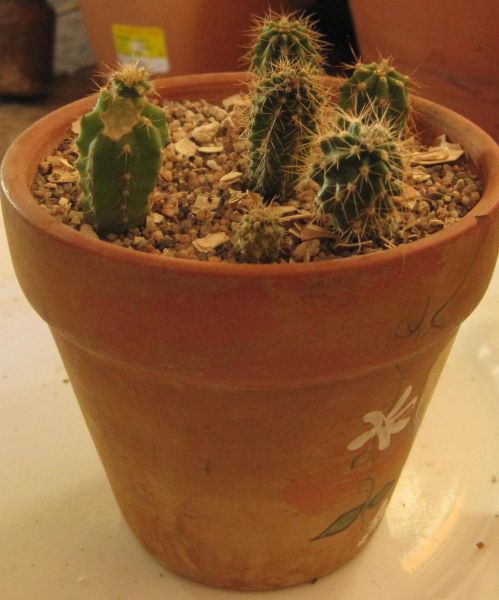 o forgot it has two friends in the pot now 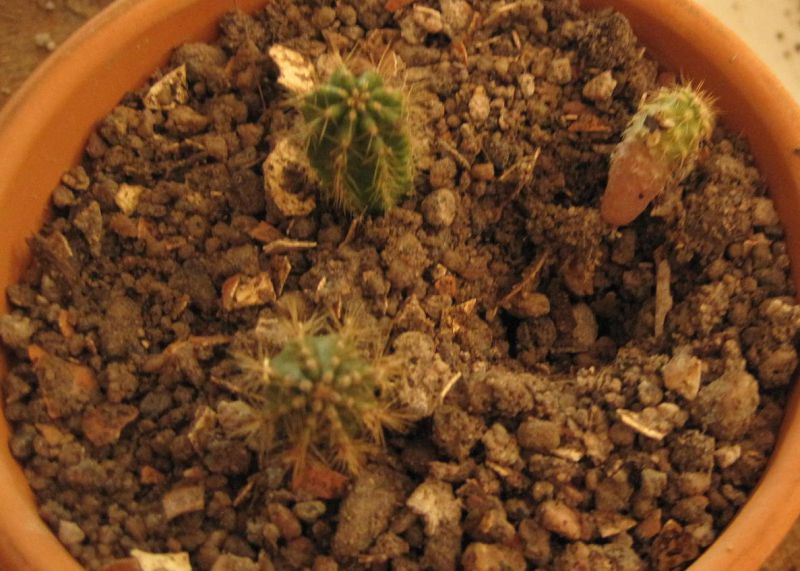 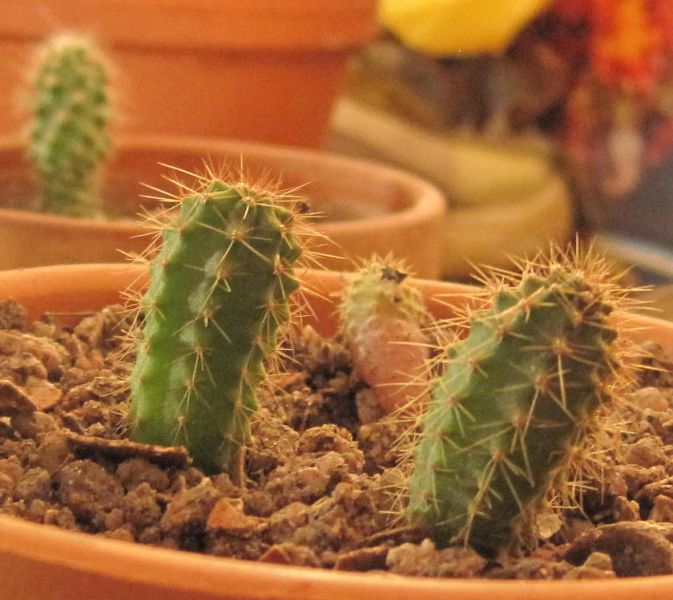 and all in their new pots ;) 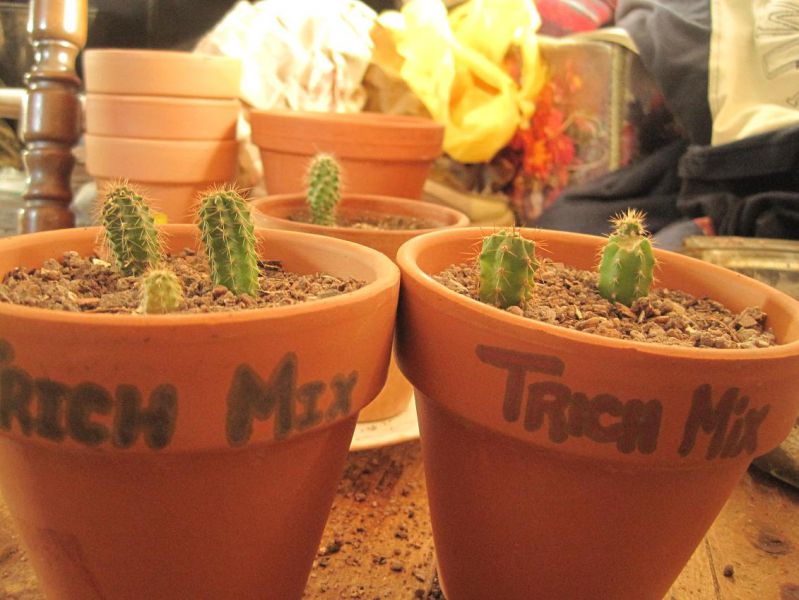 there was a strawberry cacti beside it it might have been steeling all the nutrition but I dont think that is the only reason genetics I think has something to do with it ;)

Dude you have some nice Penis cacti. I hope mine puts off more pups.

I only have three little knobs right now lolz.


Thanks - I've noticed that TBM (and bridgesii in general) love pupping and gaining mass when it's really hot and sunny - like ~90° fahrenheit and higher.

So if you don't get temps like that a greenhouse would probably be the way to try and encourage them.

I've been fertilizing and watering plenty in the last few days as it has been really hot and all my bridgesii's - the ones which have been cut - have also been pushing out loads of pups. One is now pushing out 3, could be even 4, from the base.

But my TBM is nothing compared to the ones they have in the place where I bought it. They have the most incredible mother plants from which they produce all the ones which they sell. I'm wishing for the same some day as I can't afford the really big ones which they have on sale! Next time I go there I want to pick up the other TBM clone, which they also have in their collection.

I just admired how well the Green Guys are doing:

I just admired how well the Green Guys are doing

Loving the pups! They are doing really well!

Just repotted some of my trichs.. My largest peyotl must have had its grow center damaged on the main head.. Theres a new one coming:)

Alright guys sorry for not posting much, got really sick and had some issues but i can post now.

Here we have my pride and joy, Its a TBM clone i got from a friend in Texas and it has fukurokuryuzinboku, aka boob cactus, like looks to it which is really weird. about a month ago this pup stopped growing and the othwer day it split a little at the tip and pupped right from the tip. I HOPE the pup on this boob cactus also has the boob look to it, if it does i might consider it a true mutation or separate TBM clone form.

Here is the main head of an Aztekium Ritteri i grafted to a T. Grandiflorus over a week ago, just removed the plastic wrap and it looks ike it took, this head has around 20ish small pups on it most of which are not breaking through the skin yet but at least 5 or 6 are. The original aztekium plant had a total of 36 pups on it that could be seen.

A peruvian torch cutting sent to me by a topia user a while back, still no roots but i love the way this pup looks. Mimosa hostilis branch next to it for luck. 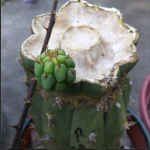 also sent to me by the same user. It is a non-PC trichocereus pachanoi. meaning its not the pachanot clone but i dont know exactly what it is. to me it looks like a "true" san pedro like what you might find in SA

Same Peruvian torch cutting but now i have a guard. i have a million praying mantis around my property and all over my plants

SEE even on my Hawaiian baby woodrose. I love these guys so much.

My ariocarpus retusus i have had for 6 months finally put off a new tubrical of growth thank god i have been waiting forever.

My psychotria viridis leaves, i have two containers and this is the first one to sprout anything. the container is covered so i doubt it was a weed of some kind, i think its a true off shoot. I ordered 4 whole leaves and cut 3 of them almost in half and left one with the tip. the rest of the removed tips were also rooted as a friend of mine did it and the tips tend to put off more growths at least from his.

There were so many pups on my Aztekium that i could not avoid hitting the water core of them when i cut it in half. this is my favorite picture of aztekiums so far. 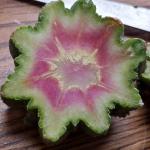 Just repotted some of my trichs.. My largest peyotl must have had its grow center damaged on the main head.. Theres a new one coming:)

Beautiful chunky looking lophs. sorry your largest one got damaged but at least it is pupping.

Do you not bother with sifting out the wood and bark from your soil mixes?

I haven't really been following the rules when it comes to soil for them..  I need to repot them.. Its been 2 years or so since they've been repotted.. I haven't sifted out wood or anything.. I know theres the tried and true way but I like to experiment.. Like my trichs.. They are loving fox farm soil.. I have a mostly coir mix I wanna try on my cacti.. I potted my Peruvianus in it to test it out.. The mix is coir, peat, sea shells n one other thing I think.. Same mix I use for my greens.. Helps ME control the nutes better IMO..