15 replies to this topic

This dude is my new hero. I have been cracking out on his videos non stop. Here's a segment of his intro video from his website:

Much more at his website, www.geofflawton.com you have to register with an email address, but that's all.

With the severe drought on the west coast of the US, i don't understand why more people aren't following these techniques. They're not at all complex ideas, but my mind is continually blown.

I have been doing a lot of reading about permaculture in the past year or so.  I think this is something that can really bring about great changes in not only my life but the lives of millions of people if it takes off.

When I finish school I plan to take at least one PDC course I just need to decide who's course to take, there are so many it is hard to choose.  I think having a permaculture design certificate would dove tail nicely into my area of study, and give me a leg up in setting up my own farm as well as producing better desing/builds for my clients.

In the front running is Mark Shepard, if you are not familiar with his work you should check him out.  He is all over youtube and has a great book out called "Restoration Agriculture."  I first saw him at a MOSES (http://mosesorganic.org/) conference last year, and he blew my mind.

I'd be into taking a course just for my own edification and fun. I will definitely check out Mark Shepherd.

I've been pro permaculture for quite some time, but only with a broad overview of the concepts. Now that i am really ready to star implementing it on my own land, i am giving myself the crash course on the nitty gritty of it all. It's really turning my crank... "reality tv" that i can actually get behind.

Most permaculture principles do indeed seem like a, 'no-brainer'. Unfortunately, the way the current economic system works, permaculture, in and of itself doesn't usually allow one to make a living. Most people who are making a living at it, depend mostly on designing for wealthy people, teaching courses, lecturing, etc. That's why, as cyclenaut pointed out, Mark Shepard is worth looking into. Though he definitely supplements his farm, he is actually showing that one can make a living primarily off the farm itself...dude has a seriously ambitious operation. Perennial agriculture definitely makes more sense than annual.

It's also a little ironic that a lot of the most productive techniques are financially out of reach for most people.

I've been fortunate enough to be involved with several design courses but have never really been interested in designing for others. My biggest issue with courses was the high propensity of 'woo-woo' types, who were more interested in crystals and patchouli than understanding how to swing a hammer or wield a shovel (yes, that's a gross generalization). I don't know your location Bev but the Bullock brothers, who are some of the movement's (kind of a creepy word there but it gets the point across) OGs are a wealth of knowledge. They actually get interns to pay them in order to come live on their property. They also do multiple design courses per year.

Sepp Holzer is another 'permie' who has a large web presence,

Thanks for all of the great suggestions! I have plenty of research to do and lots of video to watch. I'm already quite committed to a farming lifestyle, so it makes utmost sense to have my land work smartest for me, and to have all of my work continually make the land healthier and more abundant. If i can live really well off of just a few acres around my home, i think i can feel pretty secure in life no matter what's going on in the rest of the world.

We just watched a few of Geoff Lawtons vids (it is a rainy day, good for such activities). I am in love with the idea of using compost windrows to raise chickens for eggs, feed and grain free. I am going to do this, so I guess I need a tractor. His video on bamboo is also great, I was unaware that it was good fodder for cows, and that it is a good silica source. It could be used to make awesome compost windrows for chickens along with some cow manure, and eventually used as fertilizer for plants.

Thanks everyone for all your suggestions and direction. As we develop our land, I will be relying on you smart people to catch things I miss, and lend your rainbow of perspectives to ours. So many possibilities!

Just about any kind of permaculture venture here would start with an elk fence.  I have the spaces picked out, but I really need a barn first.  I'm spread kind of thin.  The barn/shop consists, at the moment, of logs, trees, and a sawmill.  Some assembly required.

I'd love a sawmill!

Yes, the makings of a barn and a bunch of sawdust bags.

Here's a pic from when I first got it home: 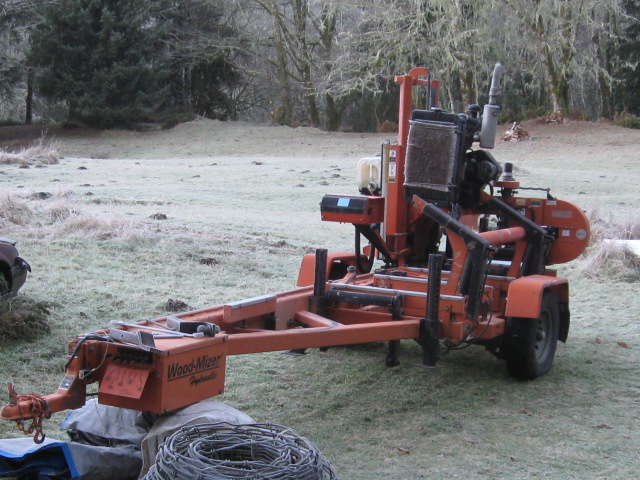 I will start small, and get an Alaskan sawmill (rail guides and a chainsaw). Work my way up to a beauty like that maybe.

Here is a great resource for permaculture knowledge.

This dude has some great guests including Geoff Lawton.

I especially like the podcast with Peter McCoy from Radical Mycology.  Dude is a mushroom bad ass who gives props to "The Anonymous Mycologists of the internet."  Hmm I wonder who he could be talking about?

BTW Peter if you see this THANK YOU for doing what you do!

Roscoe and TastyBeverage, I agree with you that the PDC class is a starting point. I took an structured PDC class and then being a glutton for punishment went back for another 70+ hours to learn how to setup and teach a PDC class. Best money I have ever spent. Since that time my Mother, Wife and one Son have taken a PDC class. This is what lead my Son and I into mushrooms.

My Son and I also took Peter's cultivation class a few months ago, he is a mushroom bad ass so to speak and a very nice guy. He did give credit to Hippie3 in the class which I respect deeply.

My Son and I also took Peter's cultivation class a few months ago, he is a mushroom bad ass so to speak and a very nice guy. He did give credit to Hippie3 in the class which I respect deeply.

Yeah, that guy is alright!

If you are in Australia I highly recommend visiting the Zaytuna farm of the Permiculture Research Institute. They have a range of specialist courses and workshops to build on top of the PDC (as well as offering the PDC itself), which are very well run, 3 meals provided, with snacks for breaks, hot showers, friendly people, and Geoff, although extremely busy and usually somewhere between (interesting) thoughts, is approachable for a chat.

Its great to see permiculture principles in action, and in such a way that the results of it fuel the education and further development of the place.

Geoff would be up there with the most iconic for me as well, what inspired me was his Greening the desert project in Jordan valley. Its actually unbelievable, be sure to look for some vids on youtube.

There is one where the boundary fence is shown. Sand on one side, green on the other. You can intern here for two weeks as part of their course offerings.

Oh yea, and working on the farm, and especially if you have knowledge of permiculture is welcome on a Wwoof style basis. There is also the ability to work for 1 or two years, and undergo a more structured approach to earn a diploma in Permiculture. This is free, I think. The thing is once you have finished your farm duties you are more than welcome to sit in on one of the classes that you would normally pay for. I also suspect that you will need to undertake a sort of research project during this time.

One very important thing to note is that Geoff is married to a Jordanian woman, and for this along with other personal reasons there is no illegal substances allowed on the property. Drinking is even questionable and long sleeved shirts and pants for men are encouraged (Jordanian culture). Smokes are allowed. There is a pub close by where you can do these things but you represent the school. Its about upholding the image that the place is not a hippy commune or breeding ground for trouble makers, but has a purpose of developing permiculture and providing a place where everyone can engage in it.

I know this is an old thread but I can't thank you enough for bringing this here for to me find years later to put to use.

I missed this before, timing favors the lucky I guess. I wouldn't have known about it at all 3 years back. Now it's a piece to add to the puzzle. Thanks.