I can't even say that I'm growing culinary mushrooms without people assuming I grow Psilocybin species.

I got rid of my f buddy recently because of her stupid questions blatantly designed to increase her ability to take me down one day. It's cool though. She let it slip that a staff member of hers snorted lines of coke with her boss at a staff party. She said she'd leave town if anyone told him how they heard about it. She still wanted to be friends just to keep tabs on me. I told her have a nice life.

Yah I get a lot of that too.  I've got a legit mushroom business and every once in a while some asshat will come through and ask me about 'shrooms'.  Seriously how dumb do you have to be to hook up a complete fucking stranger?  No getting to know me.  No dinner.  No romance.  Just go straight to sticking it right in huh?

I'm pretty sure I've had at least a few narks contact me about various things over the years.  I even tried selling some 'kits' for mushrooms locally.  Just put your syringe in which I didn't supply.  It was nothing but fucktards calling me "Can I grow magic mushrooms with these?"  Never sold a single one.  Just shut it down.

People don't realize it is the prosecutors office who supplies the defense attorney.  Pretty easy to do the math on that relationship.


I wish I could find the cartoon online that my friend had on his wall.  It showed someone blowing up an inflatable doll that was a guy in a suit, holding a briefcase.  The caption read:  "If you cannot afford an attorney, we will have one inflated for you."

Is this it Alder? 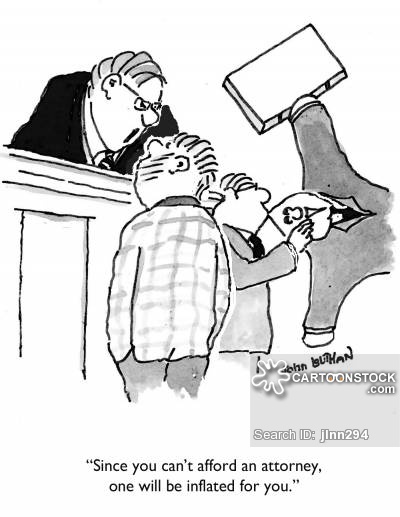 You don't know how long I searched for that, though I gave up quite a while back.

I read your post, and just for grins (it sounded like a carton I would like) I typed, 'inflatable lawer cartoon' in google, and this wasn't that far from the top of the stack (under images).

Quick, easy read and thankfully very common sense. There can be a lot of confusion online with legal myths and outright fallacies these days. Nothing worse than dangerous legal myths floating around these days like the recently popular sovereign defenses.

Listen to politicians if you want to learn how to obscure the truth and not answer questions while responding to hours of interrogation.
However since it is perfectly legal for LEO to lie, you will be better served by remaining silent.
The most you should say is, "I want a lawyer", then pay for one, don't rely on a court appointed role filler.

Fucking cunt next door decided she wanted to play fight with the neighbors and start a fence war. When it heated up and I said shit I probably should have just thought instead of said out loud the cops showed up. But only the next day. Lazy fuckers.

They never came back either. And she went so nuts I got so many documented things she did she finally shut her pie hole and leaves me alone. At least for now.

I'm amazed anyone talks to the cops. About anything.


Because we have to.
The absolute LAST thing I wanted to do with my neighbor issue was call the police. I literally have a guy who stands on things in his backyard to watch me in mine. Called the police, they threatened me with arrest as my neighbor blatantly trespasses on to my property after being told gtfo. The cops dont give a shit but if you dont "report" it (and even when you do)they dont give a fuck.

Laughed at by pigs for being sodomized. Hahaha. It's great to know my rapist has raped others who wont report it bc the cops make a mockery about it.
I've had undercover detecs put their hands inside my skirt (and yes I demanded a female officer and was denied bc "it would take too long")

I will be honest, I’m posting without reading the book. I worked for “the Man” for years and what I learned is this, keep your circle small and live a quiet simple life. Fly below the radar. Let’s use cannabis as an example. How would the cops caught you with a small amount of pot? First off, traffic stops. Don’t smoke in your car, only carry your stash from point A to point B. At home, a big one is a neighbor or roommate complaints. It’s as simple as the a square next door smelling the odor, your music is too loud, or a pissed off significant other proclaiming, “he got weed.” Selling cannabis is a whole other story. A friend was approached by a young attractive woman who said she was desperate for weed and needed a quarter. This guy wasn’t a dealer, but he is known to help a brother out from time to time. He got her a quarter, they exchanged money and she went on her way. What my friend did not know was she was a snitch and was wearing a wire, audio and video. A month or 2, later a cop shows up to this guys house with a felony warrant for his arrest. At the end of the day, he hired a lawyer, he got probation, and because he had a clean criminal history, the charges were dropped. He was able to expunge the arrest off of his record. With growing your on shrooms, as proud as your are with your accomplishments, don’t tell a freaking soul. Loose lips sink ships. And by all means, DO NOT SELL THEM. The Man don’t care if you buy spores and for the most part the Man don’t care if you grow a little, but if you make money and by pass the Mans rules, he or she will come after you.

Its all about the taxes. Bypass the tax man and oo yea fast way into the radar

LOL, Sky, that used to be my signature.

Did I not say those were the words of a friend?

enjoying READING all these ole posts+

I was listening to the radio yesterday and this guy calls in and wants to talk about being addicted to coke. He said something so unbelievably douche laced, my head wanted to explode

This weak rat piece of trash was struggling kicking being a weekend warrior. So what does he do, rat's out his dealer to the cops in an effort to quit snorting lines. He said he had in fact done it three times. Fortunately the cops must have figured small potatoes as they did not get busted.

What a loser though, can't be responsible for his own addictions. Blames it on the dealer and tries to get him thrown in the clink. I could not bevel my ears

Agreed, some people are so uber focused on themselves that they see everyone else in the world as just extras in their life story.   They don't have any problem or concern about backing over others with the bus as long as it doesn't adversely affect their own story.  IMHO being a rat is one of the few unforgivable sins.

I also believe in Karma, and that cork sucker has got some coming his way. I have faith that sooner or later the fates will even the score.

I remember being lined up against a wall by the cops, me and like 7 or 8 of my friends. I was only 16 at the time we were drinking and smoking on the local bikepath. While the one cop started asking for ID and running pockets, i quickly reached in my pocket threw a small amount of weed on the ground behind me. Well after a few minutes one of the officers sees the bag. Holds it up and loudly speaks "i will arrest everyone of you for this, whos dope does this belong to?". After a well drawn out 5 seconds, i thought about my friends having to explain to there parents why the cops are calling there home and there kids are being arrested. I literally stepped forward and owned it. The cops pulled me aside, radioed whoever, 10 min later i was free to go. For me the moral of the story is: the truth will set you free. And believe that in any situation. Unless your actually caught in the act of something far more serious and your fucked no matter which path you choose lol. But that also leads me to my next moral: dont do the crime if you cant pay the time. Weigh out the pros and cons. I was 16 with maybe 2 or 3 grams of mid grade herb. Nothing to loose. Now if your supplying every bar in your town with some johnny cash, or have a chinese mushroom lab in your basement,your rewards will be greater but the punishments will be also. IME cops are understanding. Sober pieces of shit, but let them think there in control. Did that cop really wanna arrest me, file a bunch of paperwork for nothing? Just to be released to my parents? I think not!. I dont even know if this post makes sense, sense i been drinking. Not to defend narcs, snitches, and police. But if i was wondering around selling illegal substances and profiting off of the shit, bet your ass if i got caught i would go in with a smile. Now if i grew or made a substance and was intending on consuming it myself, and somehow i got busted, i would feel my rights were compromised as a human being.

For me the moral of the story is: the truth will set you free. And believe that in any situation.

I guess that depends on what you mean by "truth" and "free."

And in the U.S., being wealthy and Caucasian (or appearing to be so) really helps a lot too, however one defines "truth" or "free."

If we're not sure if we seem old, white, and wealthy enough (or have parents who are) for the truth to matter then we should note whether or not the police are polite to us, respect what rights we have left, and call us "sir" or "ma'am." If so then we're probably good to go. If not then it might take 20-30 years before the truth gets around to setting us free.

I just watched two really good movies that should help anyone with this subject: