These were taken by an Iranian photographer Mohammed Ganji

Although these buildings seem to be tailor-made for the likes of Ken Kesey
or Timothy Leary, it’s probably best to keep in mind that any Western traveler who might suddenly decide to become one with the Universe while visiting these sites on LSD, will probably be executed immediately after it’s discovered that they’re using drugs in Iran.

These were built during the Qājār Dynasty, 1794-1925.  Apparently the rulers during that time were no fans of alcohol, stimulants, or opium, so I don't know what these guys were on but it looks like it was some good shit.

Seriously, though, the mind is capable of some magical things...

Without drugs and with a prohibition against depicting the human form ("graven images") the artists had to go another direction to make their mosques beautiful.

Love me some Islamic art! Thanks for sharing Sidestreet!

the Hindu temples are equally interesting. I don't give a hoot what they say about not doing drugs, somebody was waaaaaaaay inspired by some drug, possibly an endogenous drug, but most certainly a drug.

I see Alex Grey all over those mosques

Not to belittle the art in the mosques, which looks like it would be truly enchanting in a 3D 360-degree full-scale rendering (aka real life), but rather to respond to the conception that the art "must have" been inspired by drugs, I'd like to share some of what I see here.

The patterns we see on the ceilings are characterized by simple geometrical shapes: circles and quadrangles. The complexity of the whole has a certain repetitive quality that suggests, perhaps, generation by iteration of a rule. What particularly suggests this to me is that these complex patterns are made up, if you look closely, of individual "bricks" that are in themselves extremely simple: colored rectangles of a consistent shape of size.

Once you're dealing with simple "units" such as these, application of mathematical formula can elegantly generate the complexity and beauty we see here. The formulas do not have to be complex, in fact they can even be discovered "spontaneously" y the designers without using mathematical notation, for example when the designer "sees" how various shapes can interlock to form a larger unit that is tileable, known in math as a tessellation.

My point is I feel that mathematics could be as likely an explanation as drugs for the extraordinary inspiration displayed here.

In fact, the similarity that these patterns have to drug visuals, looked at with the knowledge that these people very likely did not take drugs, suggests to me that mathematical functions may have a major role in the form that psychedelic visuals take.

In short, perhaps these artists (and perhaps those of the Hindu temples pharmer mentions, as well) discovered and were drawing on qualities inherent to the way nature works, qualities that also manifest in drug visuals (which are certainly a part of nature). This relationship does not necessarily imply a causal relationship (drugs caused the artwork). The idea of correlation vs. causation.

This is the point where I start thinking about chaotic attractors such as the Lorenz attractor, and the way that chaotic systems made up of completely different elements can tend to create the same patterns.

Here is a drawing from Charles Leadbeater and Annie Besant, from their 1908 book, Occult Chemistry.  It is a drawing of a diatom of radium, as seen in consciousness via a learned yogic sidhi, or power.  The "atoms" in the drawing were what Besant and Leadbeater called, "ultimate physical atoms," or "UPAs," which they have identified at that early date as the common stable basic form in the structure of all matter.  Later on, in the '60s (if memory serves), a physicist named Stephen Phillips determined that the elements held in these psychic visions were of necessity, elevated to the energy, or 'fire,' level, that within the scope of the old alchemical 'elements' of 'earth, water, air, and fire.'  The small dots in the drawing below are the UPAs, or as Phillips determined, quarks (in his book, Extra-Sensory Perception Of Quarks.) 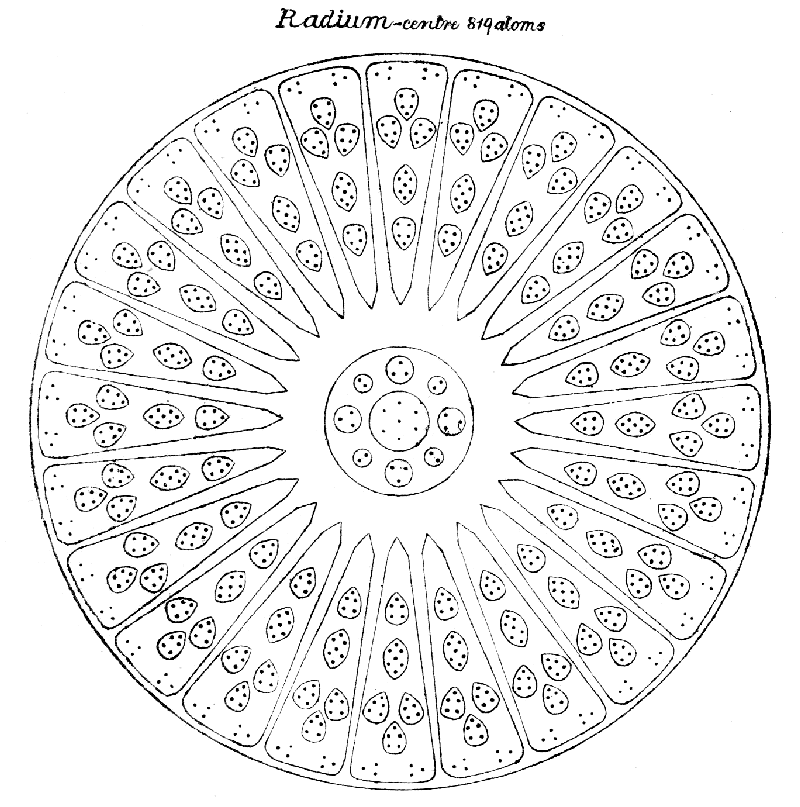 Diatoms are cool! Never knew that they have a quantum geometry...

Please, could you say what was the source of those images?

Oh, biological diatoms.  I was referring to diatomic molecules.

As a schizophrenic, I would say that it is possible that the artists were inspired by their inborn creativity,

I would also say that I find it damn peculiar that such obvious psychedlic aesthetic inspirations came about by a culture which forbids the use of any form of intoxicant.

Extensive info is hard to come by, but hashish is known to have been commonly used in the region for a couple of millennia before the Qājār Dynasty (and still is to this day, though the legal climate is pretty weird; growing it is decriminalized, and you probably won't get arrested for simple possession but then again you might; bring some extra bribe money if you go on a stoned psychedelic mosque tour...).

So my money is on hash as the inspiration. Or at least the facilitator. It's very common and popular throughout the region (even today).

A friend's brother did a business deal in Saudi Arabia a few years back and when the deal was officially closed the Saudi businessmen broke out a big, ornate hookah to celebrate and loaded that sucker up with what was probably some truly exquisite hash. Too bad my friend's brother didn't partake (at all; maybe once in High School) and was only a light social drinker, or else he could've told me how good it was, lol.

Oh, he partook that night since to turn it down would have potentially been a major, deal-breaking violation of etiquette (suggesting it's use is very deeply ingrained in the culture), but he wouldn't have known top-shelf blond Lebanese from bong resin scrapings. And he got fuuuuuuucked up, but doesn't remember much else.

So hash seems to be viewed in the Middle East the way we view wine, so it would not necessarily be considered a drug or intoxicant in violation of their cultural norms. Here, alcohol gets a similar pass (notice how most people in this culture tend to refer to "drugs and alcohol" when talking about addiction or abuse).

This reminded me of the lecture I got from my dad once after he found a dozen cannabis seedlings popping out of dixie cups under my bathroom sink. He literally gave me the standard "drugs are bad, mm'kay?" bullshit-propaganda speech while holding a gin and tonic in one hand and a cigarette in the other.

I could see a Saudi or Iranian dad giving their son the "alcohol is bad, mm'kay?" speech after catching the ungrateful little bastard brewing beer under his bed or whatever (as dad enjoys a few quittin' time puffs off the hookah, of course...).

From the Online Etymology Dictionary:

assassin: n. 1530s (in Anglo-Latin from mid-13c.), via French and Italian, from Arabic hashishiyyin "hashish-users," plural of hashishiyy, from the source of hashish (q.v.). A fanatical Ismaili Muslim sect of the time of the Crusades, with a reputation for murdering opposing leaders after intoxicating themselves by eating hashish. The plural suffix -in was mistaken in Europe for part of the word.

That may not actually the case (I've read enough evidence against that hypothesis that I stopped repeating it, which I used to do a lot). It's been strongly contested by some scholars who seem to have compelling arguments supporting their position, but I have no way of verifying the original sources of their quotes and such.

Still, with hash being so common in the region, those arguing against the hashish/assassin connection might just be doing some cultural spin-doctoring for whatever reason.

I grabbed this Clif's Notes version of the argument from Wikipedia:

Many scholars have argued, and demonstrated convincingly, that the attribution of the epithet "hashish eaters" or "hashish takers" is a misnomer derived from enemies of the Isma'ilis and was never used by Muslim chroniclers or sources. It was therefore used in a pejorative sense of "enemies" or "disreputable people". This sense of the term survived into modern times with the common Egyptian usage of the term Hashasheen in the 1930s to mean simply "noisy or riotous". It is unlikely that the austere Hassan-i Sabbah indulged personally in drug taking ... there is no mention of that drug hashish in connection with the Persian Assassins – especially in the library of Alamut ("the secret archives").

Granted, he may be full of it as they (including Hassan-i Sabbah himself) probably didn't think of hash as a "recreational drug" in the sense that our government frames it, but I can't really tell one way or the other.

I just saw the same etymology in my neighbor's dictionary a couple days ago.  Apparently, if it is not correct, fat chance of turning that super tanker around in the Straights of Hormuz very soon.