Niemand Questions and Perhaps Teaches Others to Question.

I've decided to start another thread for myself. I've done some more written work (poetry and prose and essays) that I will eventually put up in the "Collected Works of Niemandgeist" thread.

Now I've decided (After thinking for 4 months mind you [seriously]) to start a new thread here.

This thread will feature posts that I write to get others to think or question. Academic, weird, odd, spiritual, or other-wordly WEIRD FUCKING SHIZZNAT kind of whatever-stuff that will make ME think and question myself again and again, hoping that it rubs off on some of you!

AND YES: DISCUSSION IS ALWAYS WELCOME (Even if you go kind of off-topic a bit).

Feel free to start your own threads about this kind of thing. You can respond or post here, too.

Jokes or whatever are also welcome. We all need an outlet. Mods or myself might politely (Well, Mods and Admins WILL BE POLITE, BUUUUT.... They gotta get things done so umm... They might knock your head with the hammer so be aware!.... I EVEN TOLD AGAMA TO DO THE SAME TO ME SO I AM NO EXCEPTION TO THE RULE.... <<I am just the exceptional odd one who rules at nothing because I'm Nobody of Spirit>>>)

Just letting Mods and Admins know right now I'm totally cool with off-topic weird stuff unless you feel it's REALLY not OK so just keep me in the loop by posting here or PMing me. IF YOU FEEL it is OK to do so. I understand it's all cloaks and daggers for some stuff.

VERBATIM COPY AND PASTE BELOW FROM THE ABOVE WIKI LINK>>>>>>

From Wikipedia, the free encyclopedia

A laconic phrase or laconism is a concise or terse statement, especially a blunt and elliptical rejoinder.[1][2]

It is named after Laconia, the region of Greece including the city of Sparta, whose inhabitants had a reputation for verbal austerity and were famous for their blunt and often pithy remarks.

A laconic phrase may be used for efficiency (as in military jargon), for philosophical reasons (especially among thinkers who believe in minimalism, such as Stoics), or to better deflate a pompous individual (a famous example being at the Battle of Thermopylae).

The Spartans were especially famous for their dry, understated wit, which is now known as "laconic humor."[note 1] This can be contrasted with the "Attic salt" or "Attic wit," the refined, poignant, delicate humour of Sparta's chief rival Athens.

Spartans focused less than other Greeks on the development of education, arts, and literature.[5] Some view this as having contributed to the characteristically blunt Laconian speech. However, Socrates, in Plato's dialogue Protagoras, noting Spartans' ability to seemingly effortlessly throw off pithy comments, appears to reject the idea that Spartans' economy with words was simply a consequence of poor literary education: "... they conceal their wisdom, and pretend to be blockheads, so that they may seem to be superior only because of their prowess in battle ... This is how you may know that I am speaking the truth and that the Spartans are the best educated in philosophy and speaking: if you talk to any ordinary Spartan, he seems to be stupid, but eventually, like an expert marksman, he shoots in some brief remark that proves you to be only a child".[6][note 2] Socrates was known to have admired Spartan laws,[7] as did many other Athenians,[8] but modern scholars have doubted the seriousness of his attribution of a secret love of philosophy to Spartans.[9] Still, two Spartans – Myson of Chenae and Chilon of Sparta – were traditionally counted among the Seven Sages of Greece to whom many famous sayings were ascribed.

In general, however, Spartans were expected to be men of few words, to hold rhetoric in disdain, and to stick to the point. Loquacity was seen as a sign of frivolity, and unbecoming of sensible, down-to-earth Spartan peers. A Spartan youth was reportedly liable to have his thumb bitten as punishment for too verbose a response to a teacher's question.[10]

This page is a candidate to be copied to Wikiquote using the Transwiki process. If the page can be expanded into an encyclopedic article, rather than a list of quotations, please do so and remove this message. Spartan

The marble 1955 Leonidas Monument at Thermopylae with the words ΜΟΛΩΝ ΛΑΒΕ inscribed. 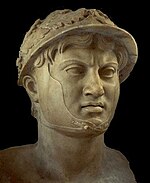 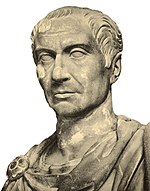 As John Wayne once said, "Well Pilgrim, I see you've got yerself surrounded!"