It is apparent to me that we have some accomplished photographers here, and many who would like to improve their photography skills, or just enjoy taking pictures for the fun of it.

Once upon a time, we had a Photo Gallery thread.

I am starting this thread in hope that others will agree it would be a good place to compare notes, learn from each other, and share some of our photos that are for enjoyments sake, and not specific to any existing forum.

Photography, like any other hobby or passion, improves with the sharing of tips, information on equipment and settings, editing, and of course, inspiration.

Hopefully there will be some response to this suggested place to share photographs and "how to" information.

What do you all think?

I mostly use an Olympus Camedia digital with c-4000 zoom. The camera is capable of far more than I am knowledgeable on settings for, but the auto settings perform well. I also am reasonably proficient with Photoshop to correct minor picture flaws.

What say you, fellow mycotopians?

The Chocolate Mountains from Colorado River 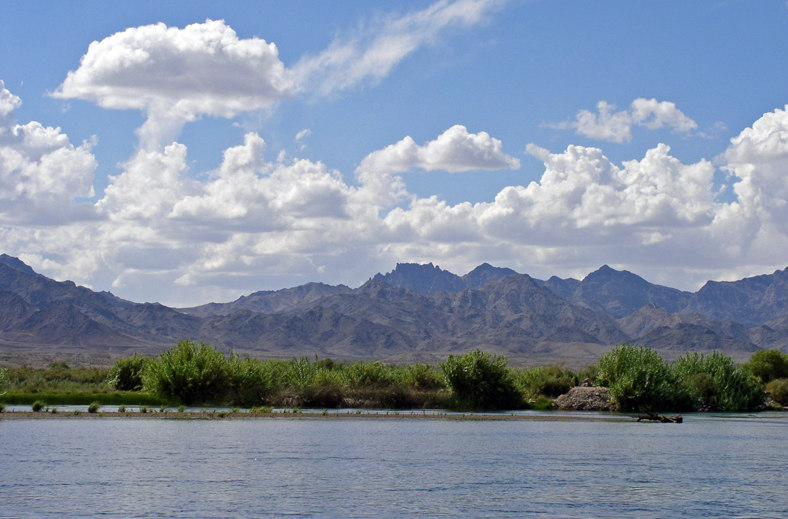 I like the idea. The Canon I've used for years has finally bitten the big-one and lately, I'm coming to dig the cell phone camera.

We might include information about Exif data. Learning to review this information can help one to analyze "favorite" photographs and perhaps why they are so appealing. Jeffrey's Exif Viewer is a handy tool.

Any of us using our phones and cameras for extra-legal hobbies need to be very mindful of stripping that EXIF data before uploading it anywhere.

Otherwise, Heck Yes! When one takes a million photos a year it can get overwhelming keeping track of all the locations and when you want to try to recreate something and can't remember where the heck you took that pic the satellite data is a god-send.

Great idea for this thread Skywatcher. I'll bet we get a lot of mileage out of this one.

I know this is my broken record rant, but for one tip, when one is sharing pictures in this medium, and this involves the enjoyment for sure, please do:

and the density (suggested: 72 dpi) to shorten the download time and save everybody's bandwidth.

Thank you in advance.

this is  salvaged from a color photo gone waaaaaaay wrong. has a Mt. Doom kind of look to it. Somewhere south and west of Gunnison on Highway 50 in Colorado, maybe near Cimmaron

this is  salvaged from a color photo gone waaaaaaay wrong. has a Mt. Doom kind of look to it.

I actually really like this picture pharmer. Definitely shows a story, a geologically tortured mountain from time past. So for the sake of education, would you share what went wrong with the original, and what you did to create a better image in Black and white?

As usual, I find it hard to restrain myself when I see a picture that draws me in. This is your image with a few filter adjustments, and some play with the lighting. 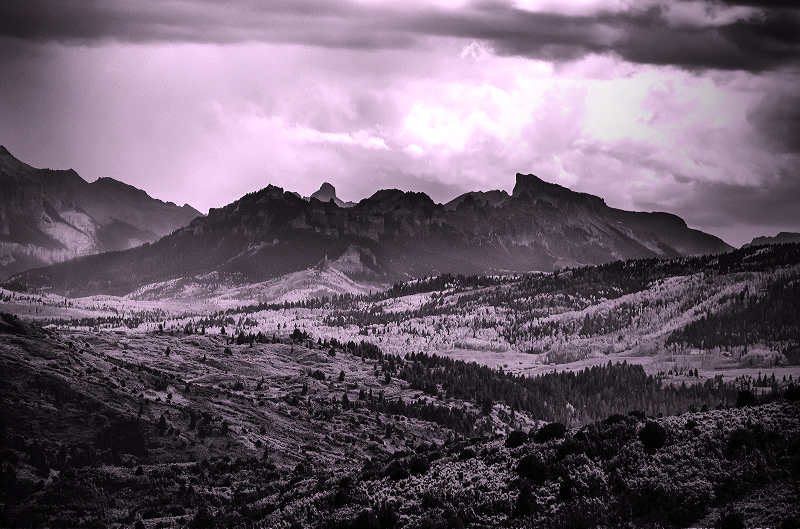 When I got home from the Colorado trip, one week at the peek of fall color there, almost every image was somehow "wrong" based on what I was expecting them to look like. Many had an indistinct almost blurry look in the fine details. It was crushing, given I'd coughed up a lot of money and spent a whole lot more time than just that week getting ready and making travel arrangements, etc. Nevermind and credit card nightmare at the beginning and a travel nightmare on the way home.....

Ultimately the problem with the pics, I think, was that I had made a setting in the camera to take double exposures of an image - one a little high and one a little low ( this is called bracketing). I should have unselected this setting when I'd completed the shots I wanted to take but just plain forgot and took almost every shot of the trip with this setting on. Combine this setting with some wind and you get some motion in your pic you most definitely do no want. Imagine every leaf on a tree having moved a quarter inch during the two exposures. This did something weird to the metering as well and the exposures were often wrong.

So, lesson learned. Always reset the camera to some minimal default condition at the end of each photo, or each group of photos intended to have the same look.

The image was edited in Camera Raw. If the photos you take are filed as either RAW or NEF format Photoshop opens the files in Camera Raw Editor which is just editing software for adjusting colors, exposures, and the other basics that aren't gimmicky Photoshop tricks like putting horns and a tail on your mother in law.  :)

So, in Camera Raw, there's a slider for Saturation. Slide it all the way to the left and it takes every bit of color out of the pic - ergo it's now black and white. From there just some adjusting with a brush for exposure to show off certain areas and to bring out some details in the otherwise blown out featureless sky. I'm thinking about putting a prettier sky in there just for more and better interest. That's the real power and strength of Photoshop - the tricky and gimmicky abilities to change and swap things within images.

Many many many many pics you see anymore are fabrications, composites of many images to make the best possible presentation of the subject of the photo. Basically anymore if you see a pic and go WOW and wonder how the hell the photographer managed to accomplish the impossible with available light HE DIDN'T, he edited or changed the living shit out of it in Photoshop.

Don't get me wrong. There are guys who are absolute masters of setting up lights and staging shots to capture both flowing motion and crystal clear sharp images of the very same subject over two or three seconds with just one or two shutter activations on the same pic BUT these are studio and lighting wizards who also understand the intricacies of their cameras better than painters understand blending colors.

Photography is the perfect blend of science and art. One might learn all the capabilities of his camera before he dies, but probably not. They're jam packed with features that can be used separately or combined for different effects or to overcome problem lighting conditions in situ, which is almost always your first barrier to taking the pic you want to take.

But I'd better stop talking now before everybody goes to sleep.   :)

Too bad this happened Pharmer, but this learning will carry a lot of weight.

I am seeing that I probably have way too much on my plate to be any more than a casual photographer, as I have been so far.  My good shots will remain accidents produced with a camera that is set up to go straight to these postings.  Learning a complex camera and then, editing software, just isn't what I am going to be doing at 68.

Thank you Pharmer. I never have heard of this setting, but have had issues from changing settings, and forgeting to return them to a default. If this was a doubled image, you did a superb editing job as the picture shows no sign of blur.

My biggest issues are with focus. When trying to work with macro, I sometimes fail in keeping the desired image fully in focus. It seems to at times be difficult with images with some depth, to focus only the object and not have the farthest points begin to blur. I have somewhat compensated by backing off, and not zooming in quite as close. Later I can crop out the surplus, for the composition I want, but lose some of the fine details.

that is THE thing about macro. the area that is in focus is razor thin so getting everything in focus on something as small as a bug is tricky.

someday I'm going to get around to a project I've been thinking about for years and macro will be the way to go.

I want to grow crystals on a sheet of glass. and when enough crystals have been piled up on the glass light the whole thing from behind with different colors and kinds of lights and hope for the best. In this circumstance macro should be perfect because the whole image is flat and only 1/16th of an inch thick I'd guess.

about the bracketing setting - it might only be available on a bigger bodied camera and, as always, costlier. My camera bodies alone cost about $500, then the cost of the lenses which is where the real money comes in. This frickin' hobby ain't cheap, at least not the way I do it. So much so that I'll probably have to keep some kind of part time job after retirement just to pay for the gadgets and travel.

here you go, have something pleasant. speaking of right place and right time I've never been able to recreate this setting. Everything has to be right  :)

The lighting and amount of rain make the perfect timing apparent. just enough ripples to make the image most interesting. 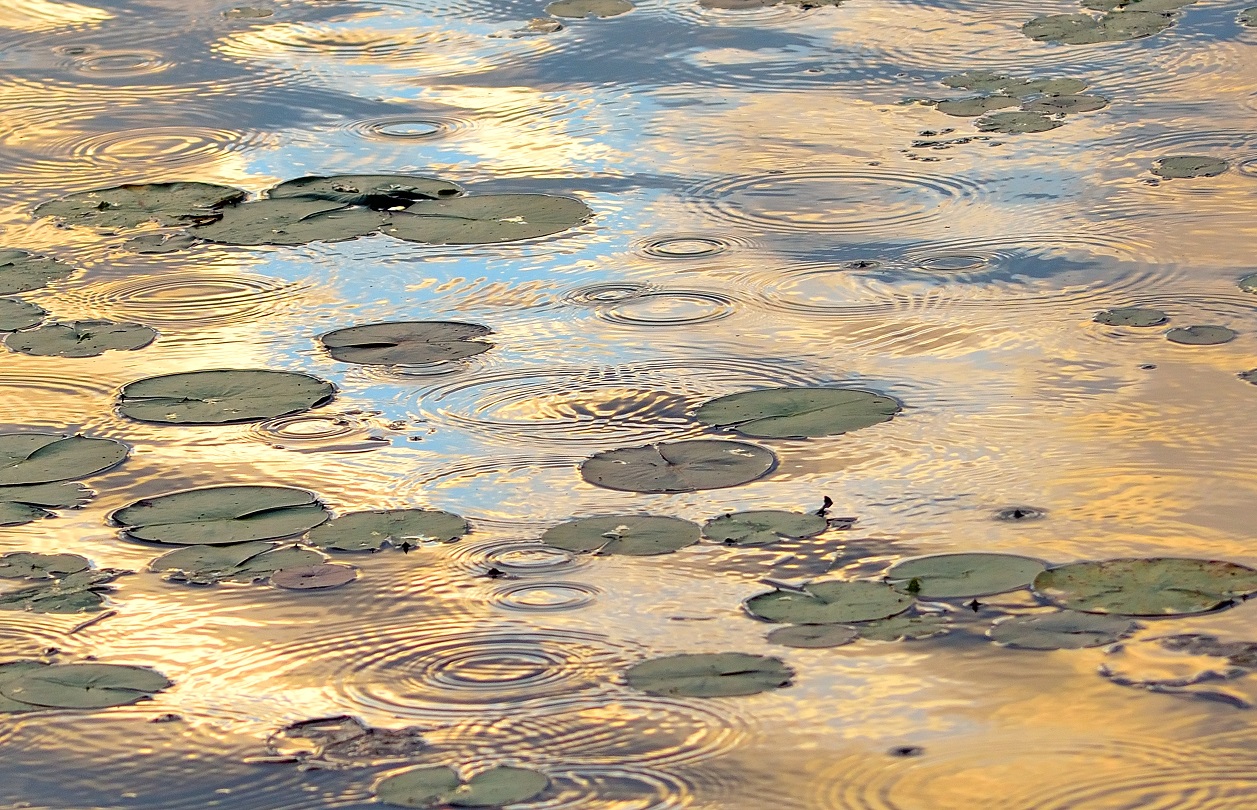 Alder take note: ^^^^^^^^ that is one of my first. I didn't need to know every damned thing. All I had to do was try on a day that happened also to be CACTUS day :)

One can get much too much caught up in the minutia and technical horsestuff, that's true.

But that pleasant little art work came from a beginner with a point and shoot camera and three minutes to spare.

Pharmer, even the timing on several of the raindrops was spot on.  You had good reflexes.

Cool thread Skye, thank you for starting it. And thank you Pharmer for all the good advice.

I tried to think about the rule of thirds more while taking pictures over the weekend. I really like some of the results.

But so far the rule I have down the best, get your butt out there and take some pics. If you don't get up and go out, the scenery never changes.

What a great picture Juthro. I love the title "Relax". You guys need to blow these photos up to viewing size, they are really show better that way........

Thanks Skye. The bears were amazingly cooperative and photogenic the day I was taking pictures. They are getting ready to hibernate, so they have been fattened up, and were sporting their beautiful full winter coats.

I unfortunately have never quite figured out that little trick for posting a pic at full size.

If you are taking full size pics, meaning the settings on your Nikon  are for Large File and High Quality (which I advise) your problem will be with making the files small enough to load here.

If your computer has the Paint program it's simple.

Save the image from View NX2 onto your desktop. Then right click on the file and select Open With ----> Paint

get props for awesome bear pics!!!!!!

Thank you Pharmer, that is high praise coming from you.

That is pretty close to how I have been resizing my stuff. I have been using percentage instead of pixels though. From large and fine, to an acceptable screen size for posting is a reduction to about 15% of original size.

What I haven't figured out is how to post it at its new reduced size, instead of as a thumbnail.

Can we take him home?  Huh, Uncle Juth, can we, can we, pulease?