home chemistry used to be acceptable and encouraged! 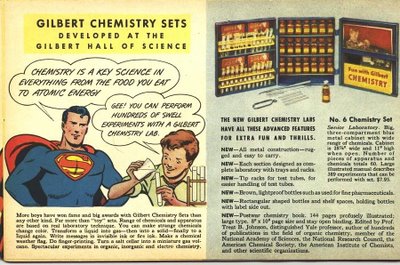 I begged for one of those when I was a kid.  It was nixed along with the bb gun. I suppose it was a good thing, since I didn't read.  I only looked at the pictures.

wait, when did you learn how to read?

cat edit: the above is NOT sarcasm. I really want to know at what age.

While I read a couple of books as a little kid, and each of these took me the whole summer, I never read over the school year.  It was just the hardest thing to do for me.  This was before the word, dyslexia, had been coined, I believe.  I know I never read any books in my three and a half years of high school before I dropped out and went in the navy.  Thank you for not thanking me for my service (I don't work much for the corporate state anymore).  My last year on the diesel/electric submarine, when I was twenty, I finally had enough time to try reading whole books again.  I had nothing else to do in my personal time, and certainly, nowhere to go (it was wet out).

I never became a good enough reader to devour all the books I would have loved to read.  Missed all the classics, rarely read novels (more work than enjoyment), concentrated on non-fiction.  Still takes me months of reading bits and pieces to get through a whole book.  I just took two months (fast for me) to read Immanuel Velikovsky's, Worlds In Collision for the sixth time.  I have just started his, Mankind In Amnesia.  So, what reading I did, and do, has to have a payoff for the work of reading.  I read non-fiction where I have a high level of interest.

I was lucky enough to actually get one of these Gilbert kits in the early 70's along with a couple of different radio-shack electronic experimenters as well.  I have never allowed myself to be without a workshop/laboratory since that time.  It's too bad kids today dont do any of this stuff anymore, (and if they do, get accused of running a meth lab or something).

Alder, I have not forgotten that I promised you to read both of those same books  by Velikovsky, I intend to do that...

If you haven't read Earth In Upheaval, and Ages In Chaos, these might be the best follow-ups to WIC.  Oedipus and Akhnaton  was the work he was researching when discoveries led him away to write WIC, EIU, and AIC.  It was finally finished and published in the '60s, and is his discovery that the character, Oedipus of the Greek tragedy was in actuality, the strange looking Pharaoh, Akhnaton.  Not having read Mankind In Amnesia yet, I don't yet have an idea of where it would best fit into a good reading order.

I have all of those in PDF except amniesia, but I rather have a solid paper book rather than pdf's. I got some great used bookstores so will be looking there.

V.'s daughter, Ruth, has become a shrink too as well as an author.  She wrote a two volume retrospective on the Velikovsky Affair.   I would like to get to that some time.

Hey kids! Got the easiest re-purpose in the world! Lot's of the chemicals we use come in these bottles. One cut 3/4 of the way around and you have an invitro/poor man's FC add drainage and you have a seed starter!

bump because we need more tips!

Check out how they are doing in my thread

I started using them with larger holes on the sides now as per MLBs suggestion there.

That is exactly what I am talking about! Fucking brilliant!

You want see to some old school s#$%, here you go:

This is the way I make all of my slurrys and is a direct copy from the old 9er tek with the exception of using a small clean bit of colonized agar instead of cloning from a fruit body.

Jar filled with water, the assembly inside, and sterilized:

Blending up the agar wedge:

A zip-lock baggie draped over the top and used to cover while pulling up the slurry:

outta likes, but I love it. that blender and I were born the same year I think

I should start a birthday thread for the blender too?

Oh yea. It still works like a charm for mycology anyway lol.

Everyone knows rubbing alcohol is a key part of any good innoculation technique. I used to use the individual disposable alcohol wipes that you buy in large packs. Now what I do generates a lot less packaging waste and gets rid of the need to constantly rip open those little foil packages.

I got a sterile gauze pad, $.99 at CVS. It folds out to a large rectangle its basically like an absorbant litle towel. I'm sure a microfiber towel would also work or lots of other things.

I take this single gauze towel and I soak it in rubbing alcohol from a bottle. Between procedures I keep it in its own sealed jar (used to be a plastic bag, which also works fine). I make sure its soaked with strong rubbing alcohol before it gets sealed up and this keeps it sterile while it is in storage (the acohol never evaps because its sealed in).

During the procedure, I keep it in its jar or bag, but with the lid or zipper off for easy access. This way its simple to keep it almost dripping with rubbing alcohol throughout the procedure - I just pour a tablespoon of rubbing alcohol into the jar and slosh it around whenever the rag appears to be getting even a little drier.

I like the feeling of not having so much trash after I'm done, and it makes clean-up easier to not have to deal with those wrappers. Plus, you never have to deal with running out of wipes, and having to go buy more. Eventually you'll run out of rubbing alcohol... eventually... still hasn't happened to me...

You want see to some old school s#$%, here you go:

This is the way I make all of my slurrys and is a direct copy from the old 9er tek with the exception of using a small clean bit of colonized agar instead of cloning from a fruit body.

Jar filled with water, the assembly inside, and sterilized:

Blending up the agar wedge:

A zip-lock baggie draped over the top and used to cover while pulling up the slurry:

I'm with you on this peacefrog, cool thread and great tek. this is a awesome way to store cultures too. its also a easy way to start a broth or liquid culture. Have you tried to keep any of your slurry for a extended period of time?

Well except for @tvcasualty, he reaches for a steamer:

By cleaning them? you mean perlite, and i have a steamer ive only used to remove wallpaper I'll have to put it to better use. i have trouble with keeping room temp over 70 so i have made a insulated incubator and i thought i read 80 while colonizing and fruit at 76.so are these temps you speak of ok for Golden Teacher, B+ and Cambodian . I'm taking prints off of the ones i posted above, they are still in their jar i was thinking about taking the cake out after the last two are ready to print but i dont want to lose it cause of something i did while colonizing. crap idk what to do probably let it finish in jar.


By "them" I meant your bins or whatever you're using for a fruiting chamber. I don't use perlite at all in the context of growing fungi.

The following link is to the rig I have, chosen after many hours of research for the best compromise for my needs: https://www.daimer.c...jet-200s-sc.htm

It produces 310℉ steam at up to 75 PSIG at the nozzle and has worked perfectly for the past 5 years. There are many models on the market, and they're definitely not all created equal. Mine is considered an entry-level commercial model.

To be worth it for our purposes, a steam cleaner needs to be rated for at least 40 PSIG, which corresponds to a steam temperature of ~290℉. The output pressure should be adjustable, and the boiler's tank should be stainless steel. You can get a decent unit for less than half of what I paid, but I had several other uses in mind besides cleaning bins.

FWIW, dry steam is much more effective than chemical sanitizers/sterilizers on hard or semi-porous surfaces because steam penetrates the micro-pores and cracks present on any surface, even polished stainless steel. Liquids like alcohol or bleach do not penetrate these areas, which are large enough to shelter microbes and spores from the disinfectant. Steam has no surface tension to overcome like a liquid does and so cleans a hard surface better than any chemical can (no matter how hard you scrub it). It also sanitizes porous materials like upholstery and mattresses without damaging them, so hotels use them to help prevent or get rid of bedbugs.


One thing that really grabs anyone's attention is a demo where you vacuum your floor (hardwood, tile, or linoleum; not carpet for this demo), then mop and rinse the hell out of it. Once dry, go over it again with the steamer. It's hard to believe how much more crap gets wicked up off the floor into the microfiber or cotton cloths thanks to the steam after you supposedly "cleaned" it with a mop (which only removes most of the grime on a floor; the rest is merely smeared around). You'll actually have to clean and mop your floors the conventional way once or twice before using a steam cleaner for the first time otherwise it will pull up SO much grime that you'll be changing cloths every couple of minutes. Also, mopping doesn't kill microorganisms (and their endospores, when applicable) nearly as effectively as steam does.

That being quoted/said, I cover my SAB with alcohol (80% spray bottle), I keep my hand tools in a jar of 91% like a barber with 'stericide" (or whatever that blue shit is), and I do re-use my paper towel squares just like @cybil!

Maybe these thoughts are too elementary but..............I buy 4 inch parafilm cut it into 4 one inch strips (3 1/2 measures) and stuff a large number (more than I am going to need) into a zip lock bag sprayed with 10% bleach or alcohol BEFORE going into the clean room , under the flow hood, or glove box.  Nothing is worse then having a few tear, run out and have to cut more breaking sterile technique.  Spraying the strips again with alcohol when just before you use them helps to easily separate the paper from the parafilm and insures sterility.

For those that use tyvek for their BRFs with injection ports below. Rather than feeling around to find the place to inject mark the top service of the tyvek circle with sharpie just above the hole before autoclaving.

To get flat silicone injector surfaces after placing silicone use squares of newspaper on either side to compress.  When the silicon is dry wetting the newspaper and rubbing it off is easy peezy.

Tyvek sleeves , thanks to "Needles" is an sterility insurer.