97 replies to this topic

I remain a slave to my debt.

At any moment you can chose not to pay. Yes, there will be consequences, but the choice is still yours. Slaves don't have choice.

At any moment you can chose not to pay. Yes, there will be consequences, but the choice is still yours. Slaves don't have choice.

I'm not necessarily making this argument (though I'm always looking for an argument...) but how is that any different from chattel slaves? They could run or band together to attack the 'owner'. Sure, there will be consequences but the choice is still theirs?

Sometimes choices are between things that are all relatively bad. Case in point, the decision to declare independance against Briton by the colonies. The ultimate outcome was freedom, but that was not apparent at the time the choice was made.

We all still live in a modified style of "mill village."  You know those places where they pay you in corporate currency that can only be used in the company store, the company housing project, the company physician.  It's just modified to look like it isn't.  "They" the corporate operators, the operators of the government taxing system, the law enforcement system allow us to keep just enough to live and provide us with enough "successes" to believe that there is an escape.  When it all comes down to it though we are still slaves.  It's not so bad, shhhh.....go back to sleep.

We are all leaves on the same tree. Similar yet different in very subtle ways.

Some people like to be led, some like to lead, most don't actually give a shit so long as they are ok, have what they need and ferk everyone else.

Some of us care, but the society we live in and which we can no longer blame  - yup, remember that old chestnut? 'Society is to blame'...   well guys, and girls, each one of us is a member of society so we are all to blame in some way for something..

Hours of mindless drivel from TV, media, schools, governments etc have resulted in a dumbed down society.

I wouldn't say I am overly intelligent, but I have noticed people are more stupid than they used to be and common sense has very nearly died out.

Slaves? Most definitely. To ourselves and our paymasters.

We do still have a choice though, (mostly), but few people choose to rock the boat even if and when they moan about their situations. 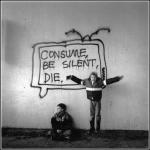 When the momentum finally builds up enough for change to happen, we will all be caught up in the storm that follows.

Being 'caught up' would be a function of identity.   Slavery would be a state of mind, a giving of oneself to the identity of a slave.

If they get my body, have they gotten me?    If I can see they have gotten even this mind, who is it who has this seeing?

Choosing to keep this body alive, even in the worst of political circumstances, even going along to get along can be seen from the seeing itself.   One could experience being nominally, and practically, in the life of a slave and yet still not be other than free, with no perceived other to enslave him/her.

^ the story of civilization since the dawn of agriculture.

Heres a good one.

One answer that would go a long way is worker owned companies.

Well, this from Wikipedia would say it is not worker owned:

On April 29, 2010, Harley-Davidson stated that they must cut $54 million in manufacturing costs from its production facilities in Wisconsin, and that they would explore alternative U.S. sites to accomplish this. The announcement came in the wake of a massive company-wide restructuring, which began in early 2009 and involved the closing of two factories, one distribution center, and the planned elimination of nearly 25 percent of its total workforce (around 3,500 employees). The company announced on September 14, 2010 that it would remain in Wisconsin.

Looks pretty top down to me. I remember when AMF Voit owned them (lots of Japanese components, and I think the Sportsters were made there).  They came back from their deathbed once when the Reagan administration put a 45% tariff on imported bikes over 700cc.

Wonder if Trump will do the same?

I wonder if Trump will get there.

...or how much it will matter.