30 replies to this topic

Afroman, just be careful, if reaching for your wallet or phone.

The implications are limitless.

As a simple observer, I'm reminded of some of TVCasualty's thoughts regarding chaos and highly organized systems under pressure.

In summary from the article:

As a gift from their dentist, a couple were given automated toothbrushes which did more than just mechanically clean their teeth. In fact, the device was linked to an app which was (voluntarily) installed by the recipient of the "free" device. By installing the app the user was agreeing by default to a data exchange which would occur utilizing the user's network (phone, wifi, ,bluetooth, etc.) without notifying the user of such activity.

Moral of the story:

Start looking a gift horse in the mouth. (There may be a hidden microphone.)

Like beating a dead horse, I have been trying to get this subject in the head of someone close to me. This person is constantly on Facebutt more than I’m on Topia lol. See the thing is, my phone number in her contacts has never been associated with facebutt. We all know that facebutt will go through your contacts and attempt to suggest “People you may know”. I do have an anonymous Facebutt account associated with an email that nobody knows except Facebutt, Also a fake name and no phone number attached. So this person I’m speaking about couldn’t possibly have any connection in her phone for Facebutt to make any connection to. To add to the reality of how accurate this thread subject is, I have have intentionally been saying annoying keywords like “Dildos and Sex Toys” less annoying I have also said “Nitrous Oxide” several time in the vicinity of her phone to prove that her microphone is listening and targeting ad at her. This person is also very naive to all of these things and definitely wouldn’t be searching any of these keywords.

Now here is where it gets weird. Later on she is on Facebutt and asks me why facebutt is suggesting friends to her from here. There is a possibility that she may have used her browser to check out Mycotopia to possibly see what I’m up to but I highly doubt it. Facebutt has somehow associated Mah’s anonymous account and suggested it her along with my anonymous account. I have tried to connect how this could have possibly happened, and the only thing that makes any sense is her phone is listening to our conversations and picked up on my user name and made the association. I never say Mycotopia out loud and only refer it as “the site”. We were at a Mycotopia get together recently and I’m sure the keyword “Mycotopia” was mentioned, and the microphone may have picked it up there.
So I’m talking to her about all this shit going on with facebutt and Syria right now and she goes on to some her news apps. Low and behold she says WTF? Then shows me some ads for guess what? Yeah Adam & Eve and other sex toy crap. Mixed with whipped cream dispensers and Nitrous oxide canisters.
If you readers that have any “Smart” devices have any doubt about your devices listening to you. Go into your settings and turn the microphone on for any of these questionable apps, the try it for yourself, say some keywords that you would never normally talk about and see the results. Really though go into your devices and make sure the microphone, camera and GPS is turn off. Uninstall all your social media apps. If that is too much to give up, at least set you phone next to your smart TV and let them feed each other with useless information.

Oh is anyone interested in buying an Amazon Echo? My friend is getting emails now from Amazon suggesting whippets to her lol

It is ever more complex a problem to walk through life without leaving a trail, and the trackers continue to hone their skills.

I have no smartphone, and no facebook. I have mentioned to my partner that it is weird how we are talking at times about smething, and even though neither typed in a search on a pc, nevertheless there is an ad for that very thing the next day.................

He does have a smartphone, and I am convinced it listens to us. Much to my horror, the other day he showed me his new toy..........

I think this will be something the dog gets "by accident" and turns into a chew toy.

Unless of course it is too late and now what I type here is entering the data base as well, and steps are taken based on that last comment to protect itself from destruction...........

I have avoided it all, including having anything wifi.  I have a 32" teevee for a monitor that I got marked down when they closed it out.  The new models they got in were totally the same for all appearance, as in, identical.  The difference was, they were now smart teevees.

I complained about my internet speeds to my hard wired phone line and DSL provider, Sentry Stink, and they told me my modem was obsolete and sent me a new one free of charge.  While I could use it with an ethernet cord, like the old one, it is a wireless modem.  I never installed it.   It's still in its box.  I am sure if I put it in and used it hard wired, anyone walking in here with a smart phone would have their visit ratted out, not to mention, it would be listening to me.

From the February issue of National Geographic: They Are Watching You—and Everything Else on the Planet

It's kind of a long read, but covers a lot of ground.

One thing that caught my attention was this comment by one of the people who watch some of the nearly-ubiquitous cameras in and around London:

“This is the best, most exciting job I’ve had so far,” Haz says. “It’s so unpredictable. Everything’s quiet, and then suddenly a fight breaks out.”

Haz sits in the trailer for 10 hours straight, eyes trained on the patrons. If he sees the makings of a drug deal or a fight, he notifies the club’s in-house security by walkie-talkie.

Either Haz has not had any exciting jobs before, or he's an example of (one of) the consequences of growing up in a digital (and therefore almost entirely visual and abstract) world.

It blows my admittedly easily-blown mind that someone can sit in a gray, unadorned box (it's literally gray and unadorned; those details were mentioned in the article) for ten hours straight watching monitors and describe it as "so unpredictable" and "the most exciting job." Especially when watching a night club; you know, those places where human meat-sacks interact (actual face to actual face) and occasionally even engage in physical contact! Then again, maybe he takes a high dose of MDA every day before work, lol (that's the only stuff that's ever enabled me to sit in one spot for many hours straight staring at a monitor while thinking it was exciting and unpredictable the whole time, though its not something I have a desire to repeat).

Some of the potential consequences of being one of the watchers were brilliantly portrayed in a fascinating and disturbing movie about the Stasi (East German secret police), who engineered the most comprehensive, invasive, and pervasive (and totally analog!) surveillance State in pre-digital human history that's appropriately-titled The Lives of Others (from 2006).

I guess that's one of the trade-offs (or adverse side effects?) of becoming one of the watchers (who are also still no doubt among the watched, so joining the team is not a cure for being paranoid about what the team might be up to). As one, you risk living life vicariously through others rather than living your own. And that to me sounds like a fate worse than death, since I could not help but feel that my own life spent in such a dreary gray box watching others live theirs would be utterly pointless (unlike the life of whomever I happened to be watching, since theirs obviously warrants watching!).

It might be productive to point out these potential side-effects to lurking in shadows living as a voyeur for State and/or Corporate interests since I imagine few have ever thought about how being such a person will change them just as knowing that we're under constant and ubiquitous surveillance changes us. And since 'they' are also 'us,' being one of the watchers sitting in a box all day is probably a serious mindfuck that leads to all sorts of mental and physical problems such as extreme paranoia, and hemorrhoids (not they they don't deserve such). Can anyone ever really relax enough to enjoy some good ol' fashioned intimacy (among other extremely private and personal stuff) after spending their day watching others who don't know they're being watched having intimate or deeply personal moments?

So I'd warn anyone currently watching others or thinking about joining the team to quit/seek another job ASAP since it will probably fuck them up in ways they can't yet imagine. 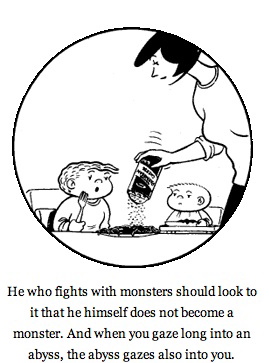