New Orgone Device I was Gifted....

A Fisher Of Souls

My fiance just gifted me this orgone device, this is next level stuff for orgonites, I have never seen one this nice.....

Orgonite: Orgonite is a mixture of catalyzed fiberglass resin with metal shavings, particles or powders, poured into molds. It is said to attract aetheric energy similarly to Reich's accumulators. Some people also add a couple of crystals to the mixture for their ability to make the energy more coherent or to enhance the working the the orgonite. Thus orgonite basically is a substance which functions as a self-driven, continuously-operating, highly efficient energy transmutation device, drawing in negative life energy and transmuting it into positive energy. The resin in orgonite shrinks during the curing process, permanently squeezing the quartz crystal inside which creates a well-known piezoelectric effect inside the crystal, meaning its end-points become polarized electrically, this apparently causes it to function more effectively as a positive energy generator. Although crystals improve the function of orgonite, they are not necessary for the orgonite to work.

Description of this device I was gifted and how its tuned is below.....

"Light Body Activators are small hand-held resin made devices that explores Color-therapy and traditional Orgone theory. The ancient Egyptians used to place different colored glass over temple ceilings and bathe in colored light. They claimed that bathing in specific colors changed their moods and perspective of the world around them.

The Light Body Activator borrows this ancient healing practice by implementing a holographic material that takes pure white light and splits it into every color of the spectrum reaching out in multiple directions therefore stimulating ones senses. The mixture of crushed up crystals, minerals and metals used in the Activator are theorized to block out EMFs. EMFs are harmful waves beaming across our world by use of cellphones, microwaves and radiowaves.

The orgone mixture used in this device was tuned to 936hz which is said to be the frequency of which the pineal gland vibrates at. The pineal gland is a small gland in our brains which is where the chemical compound DMT resides, DMT is the molecule responsible for allowing us to dream and be creative. With the Light Body Activator being designed to fit in your pocket, block out EMFs and to also stimulate the senses this device makes for a perfect tool to be used during meditative practices and/or other moments of self-realization."

In divine friendship,
your brother,
-wishy

I have seen quite a few Organite pieces, some quite beautiful, but I have to say this is the nicest I have ever seen.

I have so far been skeptical, not so much of the ability to transmute energy to positive, but being more concerned with the intent of the person while making one. I have only handled pieces made by someone I know and trust .

Perhaps I am being too cautious, but I have seen enough people who would prey upon most of our higher aspirations for doing good lightwork, with no intent but profit. I actually can feel this on the rare occasion when I have come in contact with a piece of Orgonite that was not made with positive intent. I am not trying to down the properties of Orgonite dp, and it is apparent just by looking at the craftmanship of that piece that it is a beautiful construct made with love and care.

Its beautiful if anything else, nice gift!

Very nice piece! I found my own pyramid and it is out on a shelf now. I need to get a good picture of it and share it with you. It is an exceptional piece but that one is even more beautiful. What a cool gift!

Seeing this beautiful piece of Orgonite, has inspired me to make a few, with my own specific additions to help and improve my environment. I would love to incorporate the prismatic light effect into any pieces as I was loving the light color therapy idea, used so beautifully in your piece dp.

I don't plan to rush, as it takes time to gather the materials, and I am picky. I have much already, but I believe the purer metals and organic materials are important, as is the construction process. I have the ability to use sound with singing bowls to help tune the devices as they are setting. I think you may ave inspired with your sharing of this wishy, I thank you.

Seeing this beautiful piece of Orgonite, has inspired me to make a few, with my own specific additions to help and improve my environment. I would love to incorporate the prismatic light effect into any pieces as I was loving the light color therapy idea, used so beautifully in your piece dp.

I don't plan to rush, as it takes time to gather the materials, and I am picky. I have much already, but I believe the purer metals and organic materials are important, as is the construction process. I have the ability to use sound with singing bowls to help tune the devices as they are setting. I think you may ave inspired with your sharing of this wishy, I thank you.


Did you ever make one Sky?

Did you ever make one Sky?

Sky, does the type of "device" matter? I'm looking at some now and they only seem to have pyramids.

And they seem to have different uses?

I have 3, one is at my wife's office to keep the energy around her at work calm and positive. I have one round puck I keep in my pocket and the small pyramid I bring with me and place it on top of my bluetooth speaker at work. I definitely feel better with them around, if anything they remind me to be positive

Sky, does the type of "device" matter? I'm looking at some now and they only seem to have pyramids.

And they seem to have different uses?

As far as shape, the only differences I could personally see as applicable, is in the way or direction energy moves through the device. It would be my opinion that rounded forms would radiate a general smooth field around them, which I would find more appealing for personal space. A pyramid is geometrically shaped to concentrate and amplify the output, and would in my opinion  be better suited to use for a room or larger area.

Different " uses" , could be potentially influenced by the specific organic and inorganic materials used in the construction, but overall the purpose is to work like a space purifier, to elevate the vibration of negative energies like EMF's or depleting influences, into higher vibrational positive energies, having a positive effect on those within the area influenced by the device.

Thanks so much for that Sky, you're appreciated my friend

As I mentioned, I was more interested in function than aesthetics in the construction of my Orgonite.

The central core in an Elestial quartz with all outer crystals aligned with the main central crystal. This was wrapped clockwise in a copper coil, moving from base to apex. Another copper coil was used at the base to focus the flow upward. Shungite was also used in the base area. Multiple layers incorporated brass, iron, copper, and gold metals, all conductors. Kyanite was centrally placed, and Kunzite used in the top section. The apex contains a herkimer diamond.

The Kyanite and Shungite both retain no negativity. Shungite removes EMF's and negative energies, Kyanite balances and improves flow. Kunzite is a very high vibrational material. The Herkimer at the apex is an amplifyer.

I personally like the energy of Elestial Quartz, which had more to do with its incorporation than anything else.

It has been working very well since its completion. It mostly keeps my sleeping space clear, but is occasionally moved to another room when I feel it is needed.

I took these pictures today. 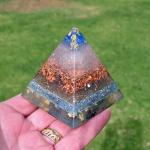 Thanks so much for this thread, I ordered a whole house sized device and a bracelet, Not much of a pendant. guy here lol.

You really did an amazing job and I'm so grateful it is working for you. Positive vibes and blessings to you my friend

I received my bracelet and whole house Orgone device.

I guess we shall see 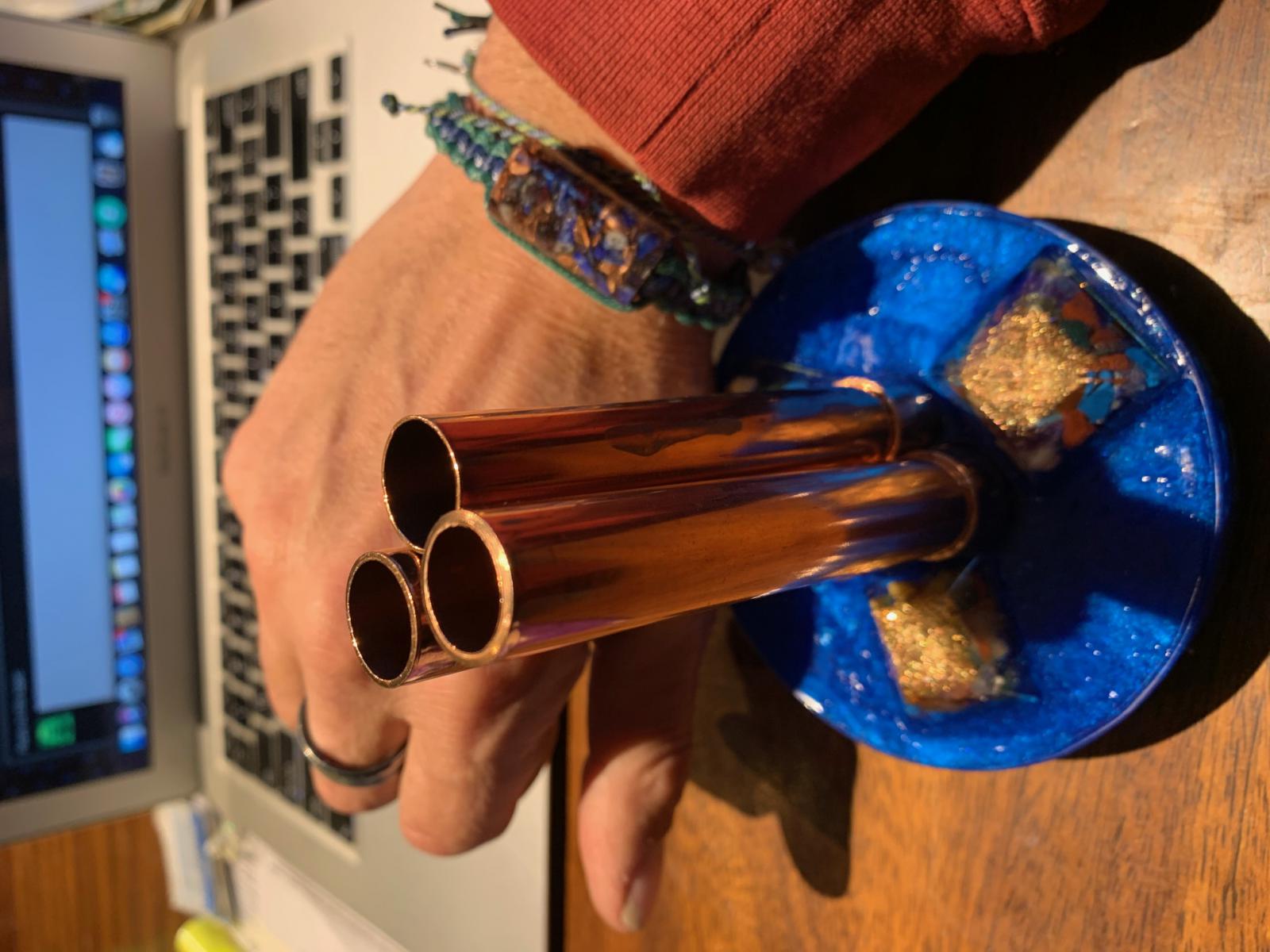 Well, I am here to say, that this is something that really seems to work.

The energy in our home has surly changed in a positive way. I also am noticing a difference in my everyday interactions wearing the bracelet.

It's not a conversation piece, I wear things that some just can't understand lol. But the energy in the interactions has been different in a positive way as well.

So if someone was really wanting to try and change the energy in a positive way, I would suggest an Orgone device of some type.

Much appreciation and gratitude to Dpwishy for the thread, and to each and every contributor that added to this.