15 replies to this topic

6 Walmart Heirs Worth Same as Bottom 41% of US
Their combined worth is $89.5 billion 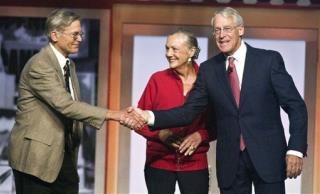 (NEWSER) – Who has more money: the six heirs to the Walmart fortune or the bottom 41.5% of all American families put together? Trick question—they're about the same. The Economic Policy Institute calculates that in 2010, six members of the Walton family were together worth $89.5 billion. That amount of wealth is equal to the total value held by a staggering 48.8 million US households.

In 2007, the six inheritors—who are the children of Walmart founders Sam and James Walton—boasted riches equal to the bottom 30% of Americans. But their assets have ballooned in value in the intervening three years. "It's just one example of the prevalence of income inequality in America," writes the Huffington Post. "The top 1% of American earners saw their incomes spike 275% between 1979 and 2007, while the bottom one-fifth of Americans saw their wealth grow by only 20%."

Im sure you already saw this, but I guess i just cant believe how brazen they are-

How many Mom & Pop stores have been crushed like bugs in how many communities across 'Merica?

It's pretty sad. How much is enough for you to earn already, you know? Geeze.

Is it time to burn it all down yet?

The Koch brothers are supporting her too.  Our super-rich owners have chosen their lackey.  What a pipe dream this whole fiasco is.  I dunno- but the line between right and left is blurring- thats for sure.

Are the elections even legitimate or rigged ?

To have an honest election we must take away the money .

burn it down set the polluted rivers on fire

I think voting and the chance that the vote will be the best one to make is not different than any bet one might think of.    The arrogance of pretended political astuteness produces votes on all sides.   If one actually comes to a realization that the realities cannot be known as any singular truth, would not inaction be the proper action?

I may choose to remain still, to watch and wait.  Even the blameless will be blamed.

If Walmart owners- the Walton family is the richest family in the world, and that happened in large part over the past decade, due to buying things cheap from China (not by making anything) and selling them back to us- mostly our middle class, effectively taking the entirety of the middle class' money; transferring wealth from a once thriving middle class to a single family paying their workers as little as possible (America's single largest employer)... I mean- its hard to blame anyone but ourselves, since we willingly gave them our money instead of buying things from China ourselves, through the internet.

It is deeply profound that one family took half of the world's richest nation's wealth, eliminating the middle class...and are hoarding it.  That excess money will never be seen again, if we ever hoped it would circulate- Im here to tell you it wont be in circulation for multiple generations.  Its gone... unless they are fined heavily for monopolizing and that fine -money be re-dispersed to 'The People.'  Yeah right.

I havent shopped at a walmart in about 5 years now.....

Lets us not forget how Sam Walton got his money to start with, his dad Thomas Walton. Who made his mark working for his brother's mortgage company, where he foreclosed on farms during the great depression.

I've talked about the Hillary connection to Wal Mart for years. It was from her example that I was able to accept the idea of a "corporatocracy". It's obvious that you cannot serve on a board and serve the people simultaneously.

I will vote. I'm still undecided as to how - but I will cast my vote.

If the people stop showing up for the vote, "they" will have the excuse to stop offering it.

I will not support violence as a means of transition. Instead, I cling to the belief that there are only a few bad guys and eventually correctional measures will become reality. History shows that it is possible. Once, there were poor working conditions at various jobs - the Unions solved many of those woes (and created some new ones). My point is that I see room for change and I'm just waiting for this cabal of corporate pirates to get the attention they so richly deserve.

I can drink from the same water fountain as everyone else

We just need to junk the "us and them" mentality and work more toward true equality - instead of "rights" for this group or that group.

I don't care which toilet stall you use - or in which bathroom. If ya gotta go.......ya gotta go.

I don't care who you sleep with at night or who you love..........so long as you love them with all of your being.

The color or your suit of flesh makes no difference to me. Your favorite football team has no bearing upon my existence.

What did that win do to alter your life ?

Or the left for that matter?

The Koch brothers are supporting her too.  Our super-rich owners have chosen their lackey.  What a pipe dream this whole fiasco is.  I dunno- but the line between right and left is blurring- thats for sure.

The argument that the two parties should represent opposed ideals and policies, one, perhaps, of the Right and the other of the Left, is a foolish idea, acceptable only to doctrinaire and academic thinkers. Instead, the two parties should be almost identical, so that the American people can "throw the rascals out" at any election, without leading to any profound or extensive shifts in policy.

Carrol Quigley (who, incidentally was Bill Clinton's mentor) wrote that in 1966 in his epic, Tragedy and Hope: A History of the World In Our Time.

They arent theives if we willingly give it to them, but they dont create anything, they dont contribute to society in any meaningful way except by absorbing and concentrating and hoarding the world's wealth in their bank accounts never to be seen again.  That isnt monetary movement and commerce.  Its the end of its circulation for generations to come.

Put the Koch brothers together with the Waltons and you have most of the missing middle class wealth. The Waltons and Kochs ate the whole middle class, perfectly legally, without firing a single shot, and we willingly gave it to them for shipping cheap goods here from China.  Its the largest transfer of wealth on the biggest scale, to the most concentrated few, in world human economic history.