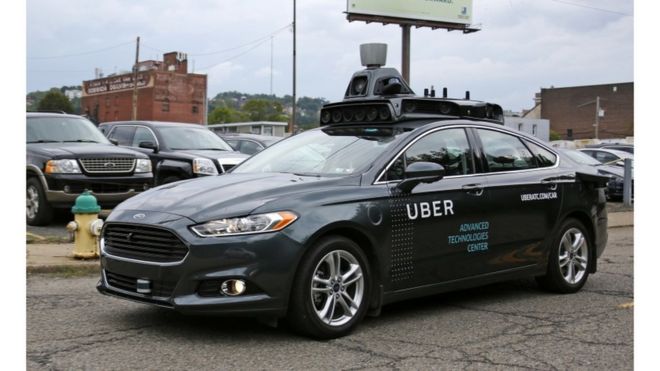 Robot cars in the US will have to be fitted with black boxes that record what happens if they crash, under US policy covering the vehicles.
The demand is part of a newly issued US Transportation Department policy covering autonomous vehicles.
The guidelines will replace a patchwork of different, and often contradictory, rules drawn up by separate states.
The US government plans to vet the code controlling robot cars before they win permission to drive alongside humans.

There was a lot more to the article but generally how does all this sound? I know someone that works for a software development company that writes ai code for autonomous vehicles. They are coming to a city near you!

My Uber ride starts the same way as they always do. I pull out my phone and fire up the app. I confirm my location, punch in my destination, and request a ride.

Then the robot shows up.

It’s a white Ford Fusion, wearing an elaborate headdress of spinning lasers and enough cameras to document the Super Bowl. And it’s the centerpiece of Uber’s latest attempt to disrupt transportation. Starting this morning, pre-selected Uber users in a 12-square-mile chunk of downtown Pittsburgh will have the option to ride in a self-driving car—with a human engineer at the wheel who can take over if things get dicey.