53 replies to this topic

I don't vote. I know that who ever is installed as President will be a disaster for the people.

I heard something funny the other day...

Donald Trump : Represents the worst of the people....

Hillary Clinton : Represents the worst of the government....

Now you're free to make your very important democratic decision

I just hope small business is thrown a life preserver.

I hope for all of us to end up better off, somehow.

In the event of a tie the election would undoubtedly be determined by the Electoral College.

It's a weird institution that ultimately "certifies" all presidential elections but is basically the fallback position in case of election weirdness, like a tie in a vote by 150 million people.

In a nutshell - the votes by the voters don't matter at all. All votes are aggregated by state. Then each state is given a "weight" determined IIRC by the number of voters in that state. I'm not sure if the intent is to make each state of equal weight or if the intent is to see to it that no state is under-represented regardless of the number of voters therein. Anyway, my vote only counts within the context of how it adds up pro or con within my own state. Not any easy idea to get a grip on.

When my vote gets sent up to the College it's the state I live in, not me, that votes.

What could possibly go wrong?

Google it, it's a learning opportunity about the complexity of governing bodies.

You have explained well thanks I think our is something like what you explained for each state we have a riding area within a provence so many ridings so many seats...

Oh one more q :) Do you have thoes annoying front yard signs so everyone that goes by can see who you alloud to put signs up not nessaraly who your voting for tho ;) ....anyway I ask because they are very sturdy and made from a type of plastic I made a mushroom growing thhing out of them and it worked pretty good :) maybe something good can grow from the signs :)

Since I am in a county of fewer than 5,000, I will be watching to see if my vote was counted.  The ballots are paper, counted electronically.   I don't expect many folks around here would vote as I did.

I used to vote exclusively Libertarian.

When the election results were being "reported" by the MSM not once did they mention that anybody voted third party. Talk about a vote not counting......

it's like the third parties and third party voters didn't exist

I have a q for you guys ....If a tie happens in Canada they both get in and have to work together in parliment.....Does the same thing happen in the U.S.?

A tie goes to the house of representatives.  The senate chooses the vice president.

Since I am in a county of fewer than 5,000, I will be watching to see if my vote was counted.  The ballots are paper, counted electronically.   I don't expect many folks around here would vote as I did.

....welp, we know we won't see that cover of Newspeak any time soon!

I was one of 38 votes for this candidate with one precinct left to report.   I am surprised there were that many Green votes in a logging, hunting, and fishing, good ol' boy county. 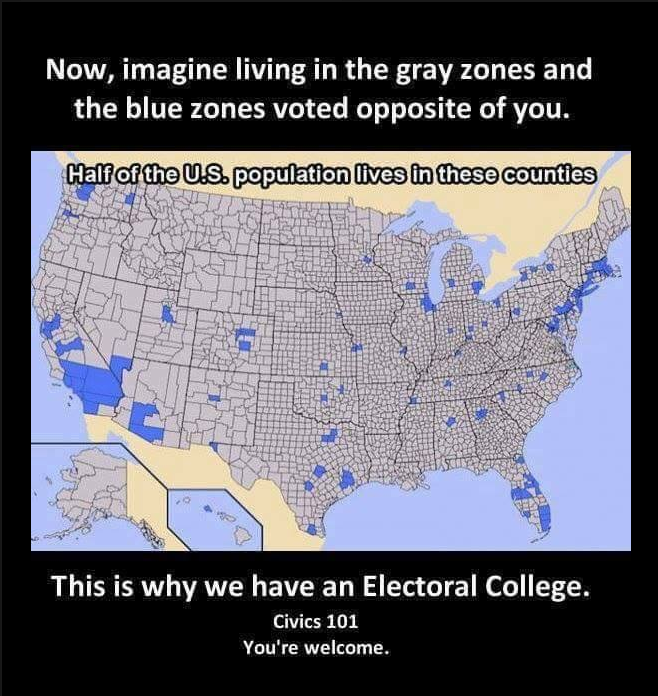 I get it now, it's about real estate and not people.  Doh!

I have spent most of my years living in the gray, with most everyone around me getting their daily fix of Fox News.   You learn to keep your mouth shut so they don't talk about you at church and on the job.   They might get the idea you is a librul.   It can get dangerous.

Clinton 2020 is not generating a lot of excitement.

Unless I'm missing something...I'm not very good at guessing percentages of such things but, I'm pretty sure that about 90.......5? percent of this map wasn't taken into consideration when the electoral college was instituted in the late 1700s. I could be wrong.

Clarifying this after Alder's response...just not sure (pretty sure it's not, actually) that the population of most of that map has nothing to do with the electoral college's institution.

Combine that map with a simulated two party lock-out system, and shit's just broken.    The fourth estate reports for the one party with two right wings.

"Areas throughout the US where towns and counties are designated as “Sanctuary Cities” appeared to correlate with the Democrat vote in the 2016 presidential election, according to an analysis of election maps.

The trend is most noticeable up and down the west coast, in New Mexico and Colorado and in the northeast.

The blue vote in a sea of red is also apparent in northeastern Louisiana, southeastern Arkansas and Western Mississippi.

In Texas, where a majority of the state voted Republican, Travis and Dallas Counties – designated Sanctuary Cities according to the Center for Immigration Studies – both went blue.

Some of the same blue areas in the nation were also sites of major protests against President Elect Donald Trump Wednesday, primarily motivated by the George Soros-funded MoveOn.org.

“Within two hours of the call-to-action, MoveOn members had created more than 200 gatherings nationwide, with the number continuing to grow on Wednesday afternoon,” the organization said in a letter to followers – leading to protests and riots erupting across the nation including in Sanctuary Cities such as Austin, Los Angeles, Boston and New York City.

Although major sanctuary city hubs saw expected Democrat favoritism, Donald Trump’s grassroots following and populist message were able to stave off a blue takeover in the Midwest and successfully bring many areas over to the Republican side.

During an October speech in Gettysburg, Pennsylvania, Trump stated one of his goals during the first 100 days of his presidency would be to eliminate federal funding for Sanctuary Cities."

In other words....most of the illegals voted for Clinton.....wonder how that was possible?
Being in a Mexico bordering state, I can state for fact that all the mexicans(legal or not) I know wanted Clinton, basically so they wouldn't be deported or so their family could be snuck over with no problems.....Also to note, all the ones I have met, which is quite a few, support the cartels and hate their politicians.....
I don't have any issues with foreigners coming here and becoming citizens as long as its done correctly, but I'm a natural born American and for the guy working next me to be illegal and making more money, and able to get better FREE insurance, as well as business loans.....Nah, fuck that, ship em back....

Unless I'm missing something...I'm not very good at guessing percentages of such things but, I'm pretty sure that about 90.......5? percent of this map wasn't taken into consideration when the electoral college was instituted in the late 1700s. I could be wrong.

I get what it's trying to say.  But why should a vote by a person in a sparsely populated area be given disproportionate weight?  The electoral college disturbs the principle of one person = one vote.

A map like that sure looks impressive.  It's misleading though.  It suggests that a minority (heh) of voters would tyrannize the great majority.  But roughly 80 percent of the country's people live in cities.

Twice in recent history has the true minority--the lesser number of voters--usurped the presidential election from the majority.

So look at that map again.  What if the zones were all sized proportionate to their population?  There would be equal areas of blue and gray.

ya' know, if we gave back just one county of Alaska to the Russkies we might change every election.

This is also interesting:

It feels good to be wanted (and not by law enforcement this time :)

Clinton 2020 is not generating a lot of excitement.