The 1s and 0s behind Cyberwarfare

Geezuz, Rise, too much homework!

I gotz to get out of this chair and get some shit done around here.  Maybe later, eh?

^Sorry, yeah- Im on a cyberwar kick.  If anyone knows anyone nearing college age- I highly recommend looking at Carnegie Mellon U in Pittsburg, PA.  I know PA sucks but this school is the most heavily recruited of all, by the NSA and Google.  It also has an acceptance rate of 30%, which is the highest of all the best Computer Engineering schools- meaning its the best return on investment if your kid likes computers and he/she will most likely get accepted.  We need some good people in there like us, because most of what they are doing for the NSA is going to be marginal at best, and will require a moral compass- in order to keep an eye on the many many assholes who are currently... reading this right now.

What!?!  Turn on, tune in, and drop out.   I would never recommend anyone take a career path like that.   You don't change anything by being the new kid on the block, and you don't get to positions of power without compromising all of that moral compass shit.    Whistle blowers get it crammed up their asses.    Go somewhere and have a good life.   Come back after the bureaucracies (public or corporate) have died, or proven themselves to be honest and transparent.   One well placed solar flair and this shit's gone anyway.   Learn something practical for living in a world of economic and political turmoil.    Something is probably headed for the fan as I type this.   Or not.

I feel really bad for the kids.  They never had much choice while their predecessors ruined whatever chance at a future they mighta had.  I myself, am in a position that I would never had taken if I had fully adopted the obvious fact of coming apocalypse.  One must have hope after all...well, it isnt required but it does help if a plan is being put together.  I think about all those kids that wish for a green future, and their only chance is in gathering skills that might aid them and their families hold onto some semblance of hope, rising up from one lonely island of hope to another.  Never doubt that one person, growing into a small collective- cannot change the world- its the only thing that ever has.' I think thats a quote by someone far smarter than me, and it does indeed give me hope.  I want good people using their powers for good.  I think thats our children's only sliver of hope.

I beat the drum for one thing, incessantly: Self realization.    It is to find what does not change within this changing shit storm of illusion.

I saw a bumper sticker I really have always liked ever since:  "I feel so much better since I gave up hope."

Hope is a huge remove from presence.   Face it, wherever one might be on the track of life, it's a crap shoot.  Five seconds from now is a mystery, if honestly considered.  We might be free to make plans and entertain some dreams about whatever might, or might not, come.  Even if we get something close to what we've planned, it won't be as we've presumed.

Basing our states of being on what happens for the rest, young, old, anyone, is likewise a remove.  Mooji occasionally tells the story of a flight attendant giving instructions for a cabin depressurization procedure.  She tells the passengers that if they are traveling with their children and the oxygen masks deploy, "first put on your mask, before putting them on your children."   It is like this with awakening; we will not be helping each other if we ourselves are so caught up with the show that we fail to realize why we're here, as ourselves.   In my opinion, it's not to get the whole world into the shape we are judging it needs to be in first.   When we have ourselves sorted out, everything still remains, but somehow we have become more able to respond.  We are being response-able, not responsible.

I see this is complicated. I would want the best people to do the job but I would not want someone I personally know to do this type of work. People can slowly be corrupted and a young person is in greater danger of being corrupted.

Alder, you seem to me to act as a paradox.  I see a juxtaposition of seemingly contradictory concepts: on the one hand, you say things like, "give up hope in favor of self-realization."  On the other hand I see you care enough about the world to work pretty hard at unearthing all the ways in which the elites are boning the masses.

I wonder, what is the unexpected truth that reconciles these efforts?

I wonder, what is the unexpected truth that reconciles these efforts?

There can be assumptions that in an awakened being, living in this human form, that there is some sort of divorce from this illusory world.   This is not the case, not fully.   What changes is perspective in identifying with a body/mind as an autonomous actor, separate from all that is sensed or imagined, the dreaming of maya.  So, in the awakened being, a body/mind walks in the maya still, while not any longer in its previous conditioned identity.   Things and situations still are playing out in the awareness, and the body/mind still encounters the play.

Unidentified with actions or having personal investments, what rises up in the play appears more as an assignment in any given moment.  The body/mind has not ceased to be, but can act without the personal biases or investments which would likely corrupt any action.   This is what is meant in Taoism when it is said that the sage does nothing, and in doing nothing, accomplishes everything.   The "doer" is an element of the false, made up, identity, a mere idea.   When someone acts in the mode of an awakened being, no one will see or notice that there is no doer there.   To the conditioned identity, only persons doing are understood to exist.   That perspective does not allow one to entertain such a possibility as there could be no doer.

And so, sages could walk in our midsts and take any form.  They can be there as the awareness alone, with no person in attendance, and yet the world will assign a personal identity to him/her.  Whose problem would this be?   One of the truly great sages of the last century was a man in India who smoked cigarettes and whose body died of cancer.   His name in the world was Nisargadatta Maharaj.  To the critical view of many, how could this man be a realized being?   Their presumptions blinded them and shut their ears to his pointings to their own divine nature.   It can be that way.

“I leave my human nature to unfold according to its destiny. I remain as I AM.”

Body/minds are in time and imperfect.  All That Is, is the perfect eternal Truth.   When seen, could there be two?

Alder, breathe. Nothing to get hung about. Strawberry fields with poppies between the rows. This shitstorm too will pass.

One well placed solar flair and this shit's gone anyway.   Learn something practical for living in a world of economic and political turmoil.  Something is probably headed for the fan as I type this.   Or not.

People's faith in technology never ceases to amaze me. It's like a lot of people seem to have forgotten that nothing's changed over the past million years or so with regards to our basic survival needs. We still need shelter, water, fire, and food. All of our modern "needs" are merely added to the basics, they do not supplant them.

So by forgetting how to acquire our basic needs directly, we place ourselves at the mercy of Murphy's Law (which over time proves merciless since no one's managed to beat the Second Law of Thermodynamics yet, or figured out how to reverse entropy).

One technological 'hiccup' of sufficient size and duration can and likely will lead to the failure of the extremely complex infrastructure modern civilization depends on and unlike was the case in major collapses of the past, ours is the first civilization in history where the vast majority of the population is utterly clueless as far as meeting its own basic needs is concerned.

But a picture is worth a thousand words, so I guess I could've just posted this image to sum up the status quo instead (never mind that his suit looks like it's from the 60's, lol): 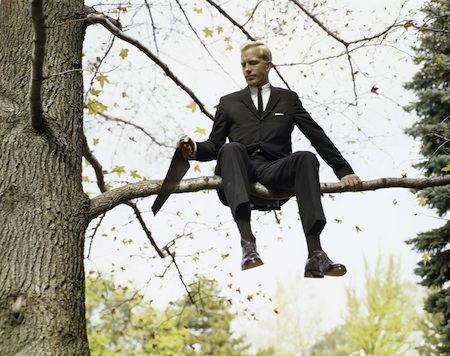